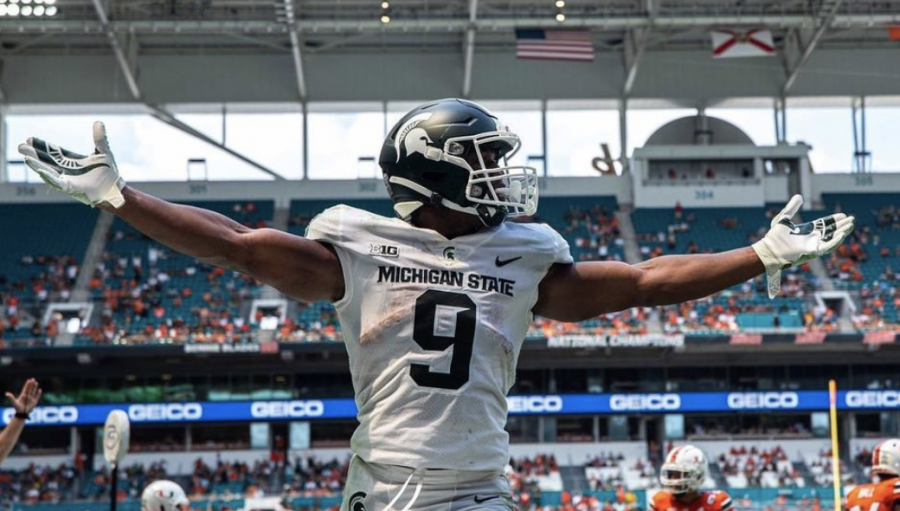 MSU running back Kenneth Walker celebrates after scoring a touchdown in the Spartans’ 38-17 win over No. 24 Miami on Sept. 18, 2021/ Photo Credit: MSU Athletic Communications

EAST LANSING— The Michigan State Spartans are set to play under the lights against Big Ten opponent Nebraska on Saturday night. MSU will be coming into this game ranked for the first time since 2019 at No. 20 in the AP poll.

The Spartans improved to 3-0 last week after defeating the Miami Hurricanes on the road, who were ranked No. 24 at the time. The 38-17 loss was the worst non-conference home loss that Miami has suffered since 1996; Tucker also notched his third win over a ranked opponent (Michigan and Northwestern last season) in just over one year at the helm.

Junior running back Kenneth Walker III had another masterful performance that included 172 yards rushing on 27 attempts as well as three receptions and one receiving touchdown. On the season, Walker leads the entire country with 493 yards on the ground and an incredible 372 yards after contact. Against the Hurricanes, he forced 20 missed tackles.

Not to be outdone, quarterback Payton Thorne earned Co-Big Ten Offensive Player of the Week honors after throwing for four touchdowns and no interceptions. On the year, Thorne has thrown for 726 yards and is top 10 in the country in both touchdown passes (9) and QBR (85.0).

The Cornhuskers come into this week’s game with a record of 2-2. After a disappointing 30-22 Week 1 loss to Illinois, Nebraska has played considerably better the last three weeks. After beating both Fordham and Buffalo by a combined margin of 80-10, the Huskers traveled to Norman, Oklahoma, to face off against the No. 3 Oklahoma Sooners and Heisman Trophy favorite Spencer Rattler. Although the Sooners won 23-16, Nebraska held their own in a very hostile environment and against one of the most high-powered offenses in the country.

Scott Frost has been the head coach at Nebraska since 2018 and has yet to have a season in which the team has surpassed five wins (his overall record since being hired is 14-22). Previously, Frost was the head coach at UCF, where he went 13-0 and won a New Year’s Six bowl with the Knights in 2017.

Veteran quarterback Adrian Martinez is having a very productive season for the Huskers and the Spartan defense will yet again have to prepare for another talented dual-threat under center. On the year, Martinez has thrown for over 1,000 yards and has only thrown one interception. He has also rushed for four touchdowns, tied for the third-best mark in the Big Ten, and 290 yards, a team-high.

Even with all the success that Michigan State has had so far this season, an area of concern has been the amount of damage teams have done through the air. Miami quarterback D’Eriq King broke the school record for most attempts and most completions against MSU last week with 38 completions (he also threw for 388 yards).

The Spartans were playing softer coverage for most of the game and only allowed 17 points, but the secondary was beaten a few times by the Miami receiving core— most notably Charleston Rambo, the Oklahoma transfer, who had 12 catches for 156 yards and two scores.

The key for Michigan State on Saturday will be to continue winning the turnover battle as they have all season and contain Martinez as much as possible. On the season, the Spartans have only lost two fumbles, both in garbage time against Northwestern and Youngstown State. For the first time in Tucker’s tenure, he will have to prove that he can deal with success and being the favorite in a conference showdown.

He has shown that he thrives in the underdog role up to this point in his tenure, but the Spartans are ahead of schedule in terms of rebuilding and if this year’s team expects to make any noise in an increasingly wide-open Big Ten East, this is an imperative test for Tucker and co.