The Nation’s No. 1 recruit in the class of 2022, Emoni Bates, announces he’s decommitting from Michigan State 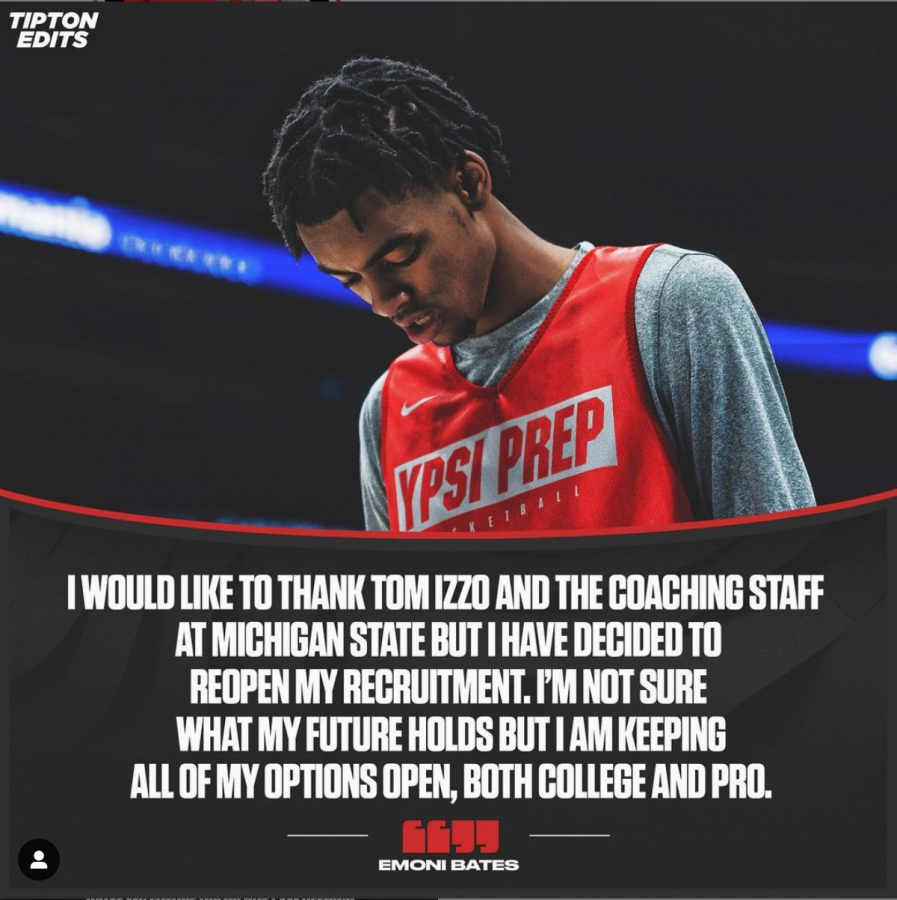 EAST LANSING — When Emoni Bates, the No. 1 recruit in the class of 2022, announced his intentions to play basketball at Michigan State University all the way back on June 29, 2020, few and far between actually believed the nation’s top recruit would ever suit up for the Spartans.

Well, just about everyone was right. Bates announced via Instagram Friday that he is reopening his recruitment and de-committing from MSU.

“I would like to thank Tom Izzo and the coaching staff at Michigan State but I have decided to reopen my recruitment,” Bates said.  “I’m not sure what my future holds but I am keeping all of my options open, both college and pro.”

The Bates party train left the local station of Ypsilanti and began a nationwide tour back on March 16, 2019 when Bates, as a freshman, led the Ypsilanti Lincoln Railsplitters to an upset, buzzer-beating, state championship win over the perennial contender University of Detroit Jesuit. Bates finished the game with 23 points, six rebounds and three blocks.

After highlight tapes of Bates and Ypsilanti Lincoln’s playoff run went viral on YouTube, it was not long after that Bates received his No. 1 ranking. From there, the accolades piled up. Bates went on to become the first-ever athlete to win the Gatorade National Player of the Year award before their senior season; he was just a sophomore.

As Emoni’s stock grew, his father, Elgin, came into the limelight of the Emoni Bates show, as he announced he would be starting Ypsi Prep Academy, a preparatory school in Ypsilanti Michigan. Elgin Bates has cited many reasons for Ypsi Prep’s founding, but the most obvious reason was competition. As a prep school, Ypsi Prep was not bound by the strict MHSAA rules and was allowed to play other high school and prep teams from across the country. The most notable matchup was when recent Gonzaga commit and No. 1 player in the class of 2021 Chet Holmgren and Team Sizzle traveled to Michigan to face off against Bates.

Ypsi Prep’s season didn’t quite go as planned for Elgin Bates and his son as Ypsi Prep went 10-4 over the season but lost the nationally televised showdown to Holmgren and Team Sizzle. The struggles continued later as news broke that Ypsi Prep point guard and fellow MSU commit Jaden Akins was leaving the program after friction with both Bates and his father. The dispute was over which player should control the ball the most, something that would not have flown in Izzo’s program.

The doubts and questions surrounding Bates’ commitment to Michigan State were valid from the very beginning. A generational talent, a possible rule change in the NBA Draft, surely a one-and-done player who’s trying to get to the NBA as quickly as possible… let’s be real, MSU was never the right fit for Bates. Yes, his commitment gave the Spartan faithful an excited boost and was a fun topic for talking heads locally and nationally, but Bates was never going to suit up for the Green and White.

The obvious question now is: where does he go next? Perhaps only Emoni and Elgin have any clue to the answer to that question, but it’s no longer MSU’s problem. The Spartans still bring in the nation’s No. 10-ranked recruiting class according to 247Sports as well as Northeastern transfer guard Tyson Walker. Bates’ departure also opens up a scholarship spot for Izzo and company to possibly add another transfer this season or leave it open for recruits in years to come.

The Emoni Bates saga has taken a new turn, and we will certainly learn his intentions whether to play college or pro soon, but for now, the Emoni Bates, Michigan State saga is over.