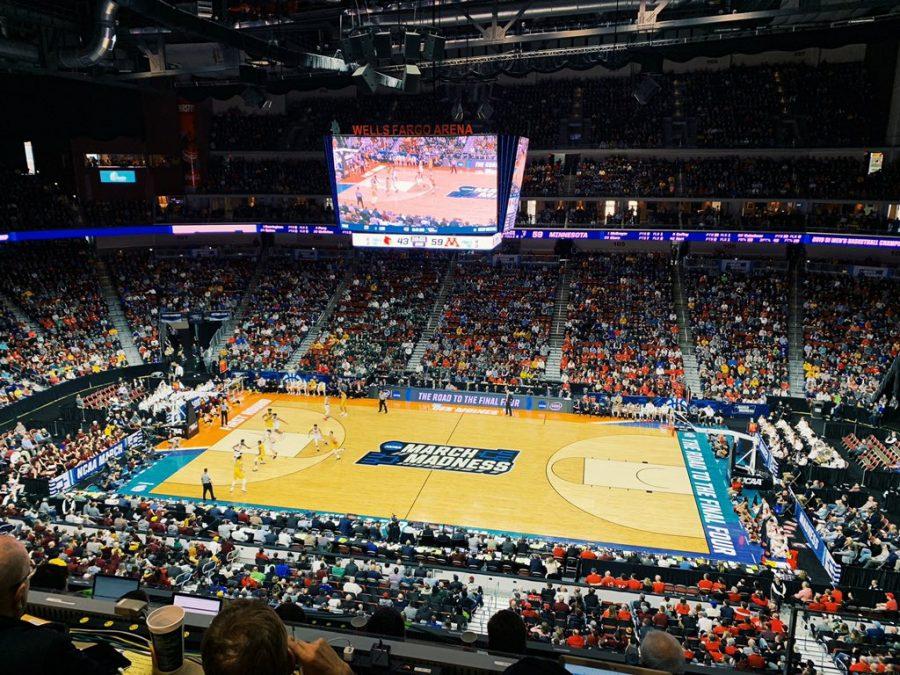 DES MOINES, Iowa– Survive and advance.That’s the motto for the NCAA tournament and on Thursday in front of a packed Wells Fargo Arena crowd in Des Moines, Michigan State found out why.

The Spartans opened up NCAA tournament play with a first-round matchup against the Bradley Braves. Not many expected this to be a game, but a poor 37 minutes of basketball and the stubborn play of the Braves kept this one tight. In the end, MSU was just too talented. Their defense held Bradley down the stretch, winning 76-65 to advance to the second round.

In a messy first half that featured 19 personal fouls, it was clear that the Bradley Braves were the aggressors. Going against a team that has struck fear into its opponents this season, Bradley was unafraid.

Michigan State got the scoring started with an early jumpshot from forward Aaron Henry after winning the tip-off, but everything flipped towards Bradley. The Braves went on a 10-4 run fueled by the play of guard Darrell Brown and forward Elijah Childs, as they both hit their first two shots.

“I love the kid, everybody loves Brown, but I thought Childs played really well today,” Michigan State head coach Tom Izzo said. “He posted us up, he scored on us, he did a very, very good job.”

The run lasted until the under-16 minute media timeout where the Spartans got a much-needed break. It was clear that Michigan State looked a step slow to open the game and the break helped as coming out the Spartans went on a 9-0 run capped by a transition 3-pointer from Big Ten Player of the Year Cassius Winston.

From there both teams went back and forth, changing the lead 11 times in the first half. The Spartans couldn’t stop Bradley in their ball-screen sets as the duo of Brown and Childs carved them up. However, Bradley had no answer for Winston either, who extended his streak of consecutive double-digit scoring games to five.

The issue for Michigan State was that no one else could score on the offensive end. The team shot 37 percent from the field in the half and 20 percent from 3-point range. The Braves also answered any runs Michigan State went on, including a 6-0 run late in the first half that would have given MSU a lift into half, but instead two triples from Luuk Van-Bree and Nate Kennell gave Bradley a one point halftime lead, 35-34.

All signs pointed towards an upset similar to Michigan State’s 2016’s opening-round loss to Middle Tennessee State as Bradley was a scorching six of their first nine 3-pointers after only averaging seven makes in a game this season.

“The first game is always tough, we gotta get used to the atmosphere, the arena, things like that, so first half that was a really good team out there, solid in a lot of areas,” Michigan State guard Cassius Winston said. “Second half, we just pride ourselves on dominating games, doing what we do best and that’s rebounding, getting stops and if we do those things we’re going to come out on top.”

Bradley opened the second half with confidence and swagger as Childs scored the first two buckets of the half to take a 39-34 lead. However as they have done all season, Michigan State responded, going on an 8-0 run to reclaim the lead at 44-39.

The Spartans got rolling as Winston finally got some help from one member of his supporting cast – forward Xavier Tillman. Tillman had 16 points in the game and 14 in the second half alone.

Michigan State saw the lead swell to seven points then proceeded to turn the ball over, five consecutive times.

The turnovers led to one of the craziest sequences in the game as an Aaron Henry throwaway led to a 3-pointer for Bradley. Then Brown stole the inbounds pass for another two points and Nick Ward got called for a moving screen on the other end, which allowed Bradley to retake a 51-50 lead.

Once again, the Braves had absorbed a Spartan run using seven second-half turnovers to do it. It seemed, no matter what MSU did they couldn’t shake them.

However, the haymaker came with about 6:24 left in the game as MSU went on an 9-0 run, breaking a 55-55 tie with six points from Winston, a Matt McQuaid 3-pointer and a Henry jumper. After responding all through the game, Bradley couldn’t do it in that moment and MSU escaped with the 76-65 victory.

With the win, the Spartans will advance in the NCAA tournament and prepare for a second-round matchup against fellow Big Ten member Minnesota on Saturday with a time to be determined. The game will be broadcasted on CBS and you can listen live on Impact 88.9 FM in the Lansing area.