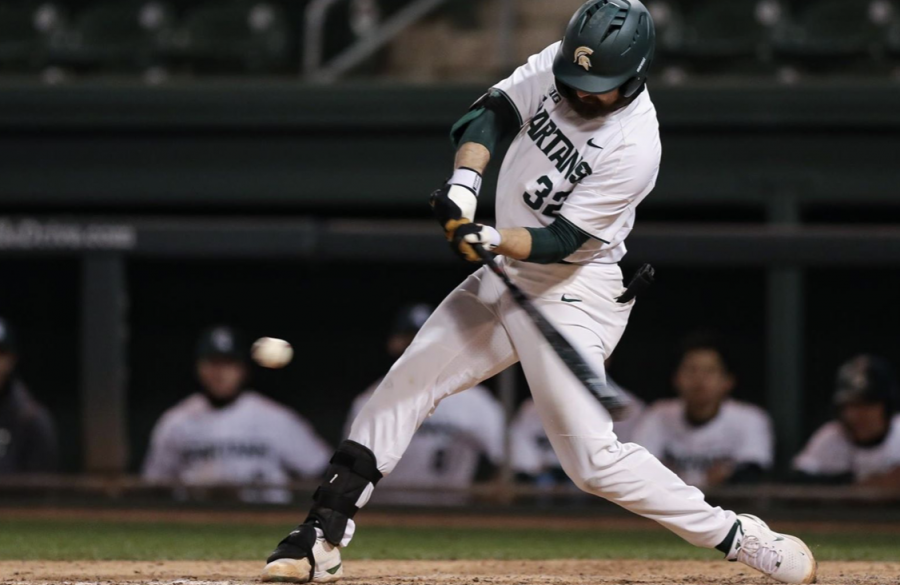 EAST LANSING – The Michigan State Spartans dropped the second game in a row to the Big Ten-leading Indiana Hoosiers. MSU had a chance to bounce back from a loss on Friday and get back to .500 on the season, but lost 10-4. The Spartans’ record is now 6-8.

Early in the game, both teams had chances to score and take advantage. The Hoosiers got important contributions from their junior leadoff hitter Drew Ashley all day long. In the first at-bat of the game, Ashley was able to draw a walk on a full count and scored on an RBI fielder’s choice by Paul Toetz. This was a theme all game as Ashley scored every time that he reached base.

The Spartans responded in the bottom of the first inning. Trent Farquhar had a leadoff walk of his own to start the game for MSU. After a wild pitch from Indiana pitcher McCade Brown, Farquhar was standing on second base. Bryce Kelley squared to bunt and laid one down the third base line. Hoosier third baseman, Cole Barr, charged the ball, fielded it cleanly, but made a throwing error that allowed Farquhar to score and tie the game at one.

MSU had a chance to take control of the game in the bottom of the second. After another leadoff walk and some more small-ball, the bases were loaded with only one out and the top of the Spartan lineup was coming to the plate. On a 1-1 count, Farquhar laced a line drive right to Jordan Fucci at first base. Fucci made the play and walked back to first base to complete the unassisted double play to end the inning and get the Hoosiers out of a jam.

Momentum had switched completely over to Indiana after the second inning. In the top of the third , the Hoosiers started to time up Spartan starting pitcher Adam Berghorst. Ashley was due up to start the third and hit a line drive home run over the left field wall. Berghorst seemed to settle back in afterwards by striking out the next two batters.

However, the Hoosiers battled with two outs and got some men on base for Fucci. The first pitch that Fucci saw from Berghorst was swung on and hit high and deep over the right field foul pole. The only question was whether or not the ball would stay fair. It did, and Indiana took a 5-1 lead into the bottom of the third.

Sam Benschoter took over for Berghorst in the top of the fourth. Berghorst threw 4 2-3 innings, walked three, struck out five, gave up five earned runs and took the loss. Indiana would go on to add more insurance runs off Benschoter in the sixth and eighth innings. The lead grew to 10-1.

On the other side, the Hoosiers had excellent performances from their pitchers. Brown was credited with the win after throwing five innings and only giving up one run. At one point, Brown retired nine Spartans in a row, including a 10-pitch inning when all three MSU batters struck out.

MSU coach Jake Boss went to his bench in the bottom of the ninth inning by pinch-hitting three batters in a row. Jack Frank started the inning off with a hard-hit single into left field. He was followed by Andrew Morrow, who promptly squared up a pitch and ended up with a double off the wall. The hit parade from the bench was continued by Casey Mayes, who singled and scored Frank. After some more scrappy at bats, MSU finally fell after Zach Iverson struck out looking to end the game.

These two teams will play in the series finale Sunday at 1:05 p.m. at McLane Baseball Stadium. Michigan State will be looking to salvage one game against Indiana to avoid the weekend sweep.