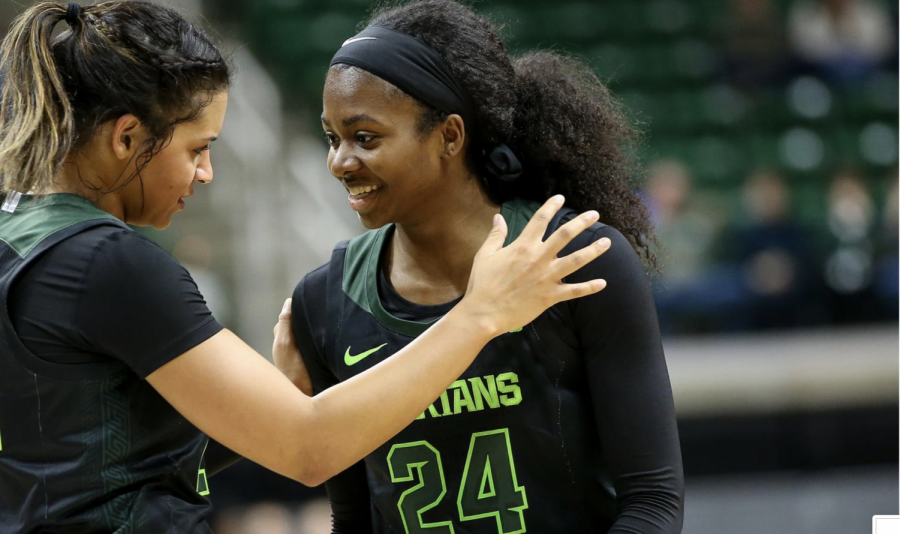 INDIANAPOLIS — Michigan State looked dead in the water during a first half that was dominated by Indiana in an extremely hostile environment at Bankers Life Fieldhouse on Thursday. It completely flipped the switch in the second half however, outscoring Indiana by 16 points after the break on the way to a 69-61 upset of No. 9 Indiana in the quarterfinals of the Big Ten Tournament.

This was the Spartans’ first win over an AP top-25 team, and it came at the perfect time with MSU needing one more win to cement its status in the NCAA tournament. IU had won nine straight games entering the contest and is in the midst of its best season in program history, setting records for conference wins (16) and highest AP ranking (9).

The biggest reason for the second-half comeback was the play of junior Nia Clouden. The All-Big Ten First-Team guard scored just three points in the first half, but exploded for 27 second-half points to lead all scorers with 30 points.

Another big difference in the second half for the Spartans was sophomore guard Alyza Winston. She only finished with 13 points but was a difference maker and a steady hand for MSU down the stretch before fouling out in the final minute.

The first half was a nightmare for MSU, as it turned the ball over 12 times, including eight in the first quarter. The turnovers led to the feeling that the Spartan deficit was much more than eight points at the break.

Clouden scored just three points in the first half, all on free throws, and was struggling from the field. But when she drove to the basket for an and-1 to start the second half, something flipped for the Spartans’ star. She was aggressive throughout the second half and seemed to make everything that she put up, including a deep three with the shot clock running down.

MSU picked up the win without sophomore starting wing Julia Ayrault, who has missed the last four games with a concussion, and could be missing another wing for the semifinals, as Tory Ozment went down with an ankle injury in the final minutes of the quarterfinal win.

Clouden and Winston were the only Spartans to score more than six points in the game, but MSU got contributions from its reserves, outscoring IU’s bench 13-0 and getting at least three points from eight of the nine players that saw action for the Spartans.

Both MSU and IU turned the ball over frequently, but the Spartans did a much better job of taking advantage. MSU scored 18 points off of 17 Hoosier turnovers compared to IU scoring just seven points off of 18 Spartan turnovers.

MSU is back in action in the semifinals Friday night against the winner of the quarterfinal matchup between the sixth-seeded Iowa Hawkeyes and the third-seeded Rutgers Scarlet Knights.