FINAL: Spartans return to DeMartin Stadium, get 2-0 win over Northwestern 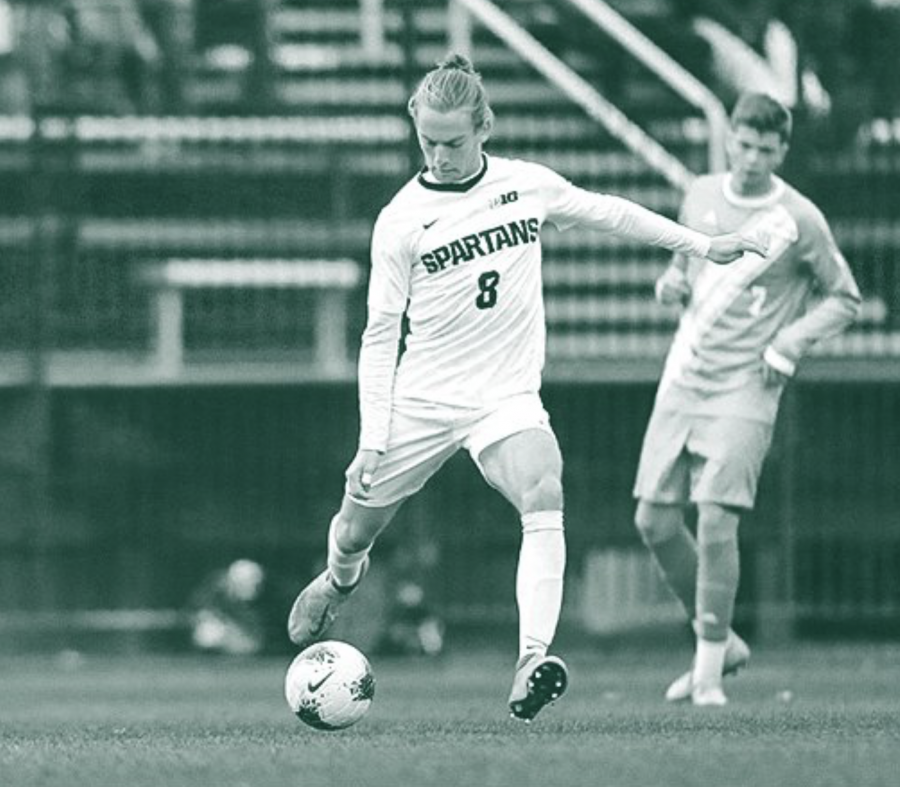 EAST LANSING — The Michigan State men’s soccer team picked up its second victory of the season in a 2-0 thriller against the Northwestern Wildcats. For the first time in 494 days, the Spartans played at DeMartin Stadium and it sparked their offensive weapons to produce two polished goals.

“It felt great to be back at DeMartin Stadium,” MSU coach Damon Rensing said. “It was the first time we played in a real college soccer venue (since the 2019 season) and not an indoor place or a high school.”

The Wildcats, now 2-3 in the conference, scored in each of their games this season. This was the first game that they were held scoreless.

The Spartans had eight days to prepare for this fixture after the 2-0 defeat to Ohio State and it looked like Rensing got the lineup right on Thursday.

The Spartans started with three central defenders, which were junior Luke Morrell, junior Dante Morrissette, and sophomore Nick Stone. The trio of defenders were on top of everything as they held the Wildcats to zero goals.

Senior goalkeeper Isiah Handspike made his first start for the Spartans this season and finished with a comfortable performance in between the posts. While he was not really tested by the Wildcats, he did have one crucial save.

“Isiah had the opportunity to start today and for him to get a clean sheet and a victory was great for him,” Rensing said.

The opening 15 minutes of the game consisted of both teams finding their way around the pitch by keeping possession but not making any threatening passes in between the defenders.

Sophomore defender Will Perkins was active in the wide areas and contributed considerably to the offense and defense.

At the 30-minute mark, junior forward Farai Mutatu received a pass from junior midfielder Olu Ogunwale, cut in between two Wildcat defenders, and fired the ball with his right foot to the top right corner.

“Farai was electric today,” Rensing said. “It felt like Northwestern did not have an answer for him.”

Mutatu celebrated his first goal of the season and it was a stunning effort to beat Northwestern senior goalkeeper Miha Miskovic. Ogunwale recorded an assist and played a season-high 87 minutes against the Wildcats.

At the end of the first half, the Spartans looked to be in control. They knew that the key to finishing the game in a victory would be the mentality of the team.

“Our mentality was not great against Ohio State and we needed it to be better today and for Indiana next,” Rensing said. “When our mind is right, we play really well.”

At the start of the second half, the Spartans kept pushing for a goal. Sophomore Conner George and Mutatu continuously pressed the Wildcats’ defense to force errors.

The Wildcats had three shots on goal in the second half and their biggest chance came from sophomore forward Ugo Achara Jr. in the 50th minute.

Stone won a ball back 13 minutes later for the Spartans in a high position and immediately fed the ball to the feet of George who took a touch and shot the ball with his left foot to Miskovic’s near post.

All the Spartan players on the field celebrated George’s goal on the touchline and posed for a picture as a team.

“We’re all brothers and Spartans,“ Mutatu said. “It feels like when one person scores, we all score.”

The energy from the Spartans was surely felt. It was evidence for Rensing’s comments about team mentality and sharpness.

The final minutes of the game consisted of the Spartans keeping possession of the ball and closing out the game with zero mistakes.

The Spartans played three substitutes off the bench, their lowest amount this season.

“The whole team was happy to play at this stadium and we had a really good team effort,” Mutatu said.

After playing in an inspiring way, the Spartans look to start the second half of the season with another win. The Spartans are now 2-3 in the Big Ten and will travel to Bloomington to face the Indiana Hoosiers on March 15 at 2 p.m.