FINAL: Spartans get back in win column with gritty 64-58 win over Indiana 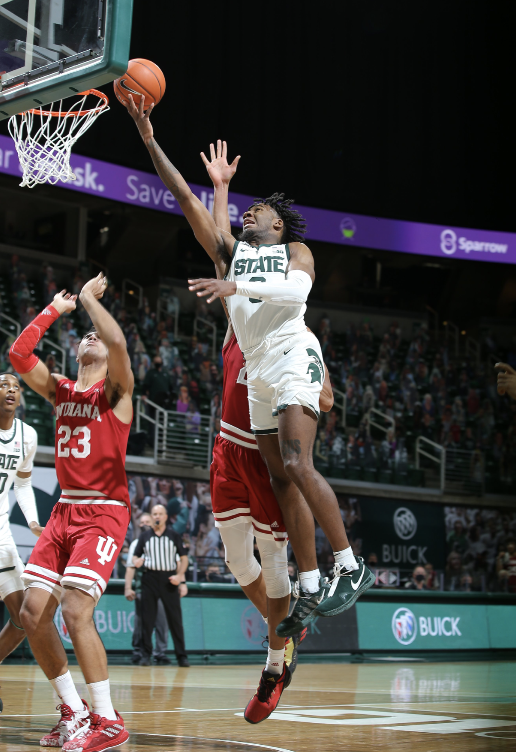 EAST LANSING — The Michigan State Spartans played their fifth game in 11 days, as they welcomed the Indiana Hoosiers into the Breslin Center for a crucial game regarding both teams’ NCAA Tournament hopes. The contest was also the Spartans’ first in the month of March, and in true MSU fashion, the Spartans were able to bear down and grind out a 64-58 win.

The first half featured a low-scoring, foul-heavy affair. The two teams combined for 19 first-half fouls and 25 free throw attempts. Neither team was able to find a rhythm on either end of the floor, and the score was knotted up at 26 at halftime.

Joshua Langford led the Spartans in scoring with six points in the first half as well as five rebounds. He hit back-to-back jumpers in the final minute to tie the score at halftime. Aaron Henry struggled to put the ball in the basket, shooting 2-for-7. That would soon change.

As for the Hoosiers, it was Rob Phinisee leading the way with nine points. Trayce Jackson-Davis, who dropped 34 points the last time these two teams collided, was held to seven first-half points.

The second half opened with a quick run for the Hoosiers, including a fast-break jam from Race Thompson, before Langford pulled the Spartans back to even with a 3-pointer. With 18:30 to play in the game, a Henry runner gave the Spartans their first lead since 4-3 early in the game.

The Spartans continued to shoot themselves in the foot with foul trouble, picking up their seventh foul of the second half with just under 15 minutes to play, giving the Hoosiers the bonus. However, the Hoosiers would return the favor with 11:35 to play as the sloppiness on both sides persisted.

With 10:32 remaining, Julius Marble dove on the floor for a loose ball and flipped it to Henry, who found Gabe Brown on the fast break for a 3-pointer. On the other end, Langford blocked an Aljami Durham layup attempt, leading to another runout in which Henry found Brown for a foot-on-the-line two. The sequence put the Spartans up by three points with 10:08 to play as Indiana coach Archie Miller called timeout.

“(Henry) made some great looks and some great passes and I just happened to knock down the shots,” Brown said. “I’m thankful for him.”

The Hoosiers took a 49-48 lead with 4:43 to play as Trey Galloway took a layup into the teeth of the Spartan defense. Seconds later, the Spartans would take a two-point lead as Henry knocked down a free throw, then another layup after the Spartans got an offensive rebound off his second free throw miss.

With just over two minutes to play, Henry got a friendly, front-iron bounce on a 3-pointer to give the Spartans a 56-52 advantage. A subsequent defensive stop allowed MSU coach Tom Izzo to call timeout with 1:31 to play to get his team in the right headspace to close the game.

Out of the timeout, Henry nailed a floater with 1:15 remaining, putting the Spartans up by six. On the other end, Durham had another layup blocked by Marcus Bingham Jr., but Jackson-Davis was able to corral the offensive board to give Durham a 3-point look. He missed, Henry rebounded and was fouled, and the Spartans were free throws away from putting the game on ice.

“I wanted to win,” Henry simply said of his late-game heroics. “Pressure’s on. That’s where guys in my position have been before…It all comes down to me wanting to win.”

Free throws from Henry, Langford and Hall did just that, as the Spartans walked off the court victorious, keeping postseason dreams alive.

Phinisee’s 16 points led the Hoosiers, while Jackson-Davis finished with just nine. Much of that containment had to do with the defensive prowess of Bingham, who served as the primary defender on the Hoosier’s big man in the second half.

The Spartans will have yet another quick turnaround, as they travel to Ann Arbor to take on the No. 2 Michigan Wolverines on Thursday.