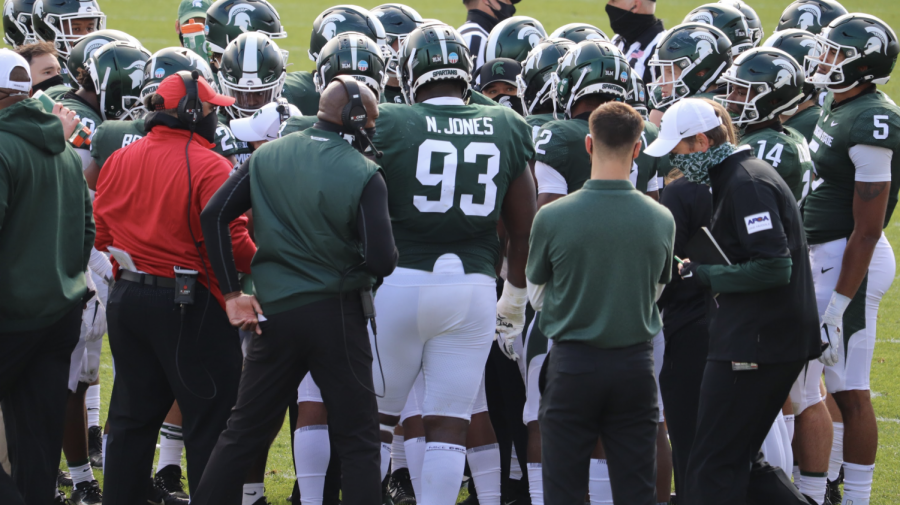 Mel Tucker huddles with his team in the season-opening game against Rutgers/Photo Credit: Ian Gilmour/WDBM

EAST LANSING— Michigan State has landed former Arizona defensive back Khary Crump through the transfer portal. Crump announced his decision on Twitter Saturday evening. He is also the second transfer portal commitment of the day, with former Louisville defensive back Marqui Lowery Jr. committing to the Spartans on Saturday as well.

Appreciate the opportunity I am committed to Michigan state Spartan dog💚 able to come home #Ferndale, Pontiac, to East Lansing Special thanks to @Digdeep810 and @coachk924
@HarlonBarnett
@coach_TYillman pic.twitter.com/tdAXXhryle

Crump, who was ranked as a three-star prospect by 247 Sports, spent last season with the Arizona Wildcats, but did not appear in any games. He left the football program just two games into the season, but Crump, who is 5-foot-11, brings another athletic presence and strong frame to Mel Tucker and Scottie Hazleton’s defense.

Crump was rated by 247Sports as the No. 83 overall prospect in California and the No. 926 player in the nation. Before committing to Arizona, he was offered by BYU, Oregon, Oregon State and Utah State.

Tucker has made the transfer portal a priority, as he has landed 11 players, including five defensive backs.

With the addition of Crump, the Spartans now have options at cornerback, a position that was sorely lacking depth before the recent additions. Former starting corner Shakur Brown announced his intention to declare for the NFL Draft as an early entry after a spectacular junior season on Dec. 14, 2020. His decision left the Spartans with only two experienced corners, Kalon Gervin and Angelo Grose.

Along with Gervin, Crump, Brooks, Lowery Jr., and Kimbrough will all have a strong chance to earn a starting position on the outside, with Grose projecting as a nickleback. Kimbrough is also the only player out of the three with any Division I college playing experience.