Spartans gut out first win of season at No. 20 Penn State 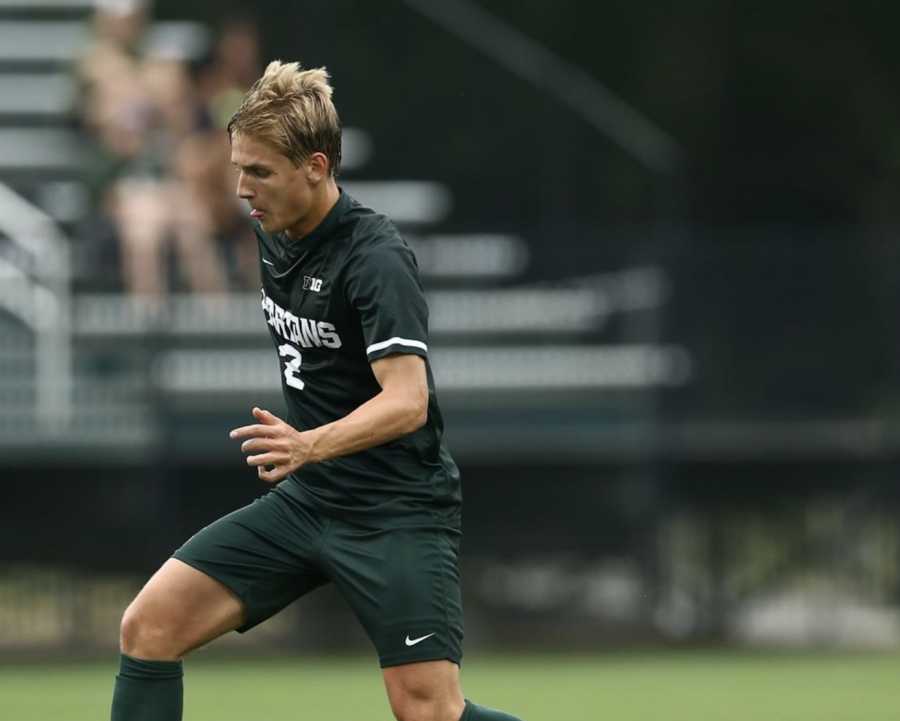 Michigan State earned its first win of the 2021 season after a hard-fought 1-0 road win against No. 20 Penn State.

The lone goal of the contest came from an unfortunate own goal off the leg of Penn State defender Femi Awodesu in the 87th minute. The ball hit Awodesu point-blank off the post after a crafty Jack Beck volley from the right side of the six-yard box.

MSU played well in the first half and held Penn State scoreless, the first time all season that a team hasn’t scored against the Spartans in the opening half. Defenders Nick Stone and Luke Morrell anchored the back line and kept the Penn State scoring chances that MSU goalie Hunter Morse had to face to a minimum.

As the game wound on, the Spartans continued to show promising signs as they did against Michigan. MSU began the game with Farai Mutatu and Gianni Ferri playing down the middle, complemented by the pace and skill of Michael Miller and Olu Ogunwale on the wings.

An early yellow card for Ogunwale tempered his aggressiveness in the first half and altered his amount of playing time in the second half. Much of the first 30 minutes of the game was played between the 18-yard boxes.

MSU’s best scoring opportunity of the first half came in the 33rd minute when Miller danced on the ball on the left side of the box, created an inch of space to send a cross toward the back post for midfielder Alex Shterenberg to corral, but Shterenberg was just too late and sent it wide of the right-hand post. As such, MSU went into halftime tied for the first time this season.

Coming out of the break, Penn State dominated every facet of the game; every attacking threat was turned away as the MSU defensive effort kept the Nittany Lions at bay.

Penn State’s best scoring chance of the match came in the 62nd minute. The Nittany Lions had a crossing opportunity trickle all the way through the box and to the back post; the ball was bundled over the line and into the back of the net. Directly after, the referee’s whistle blew for a foul in the box against Penn State, and the goal did not count.

Offensive action went back and forth for the remainder of the game, with MSU playing the role of the aggressor, and the Spartans’ much-needed offensive breakthrough finally came in the 87th minute.

A deep corner-kick from Beck was kept in the box on two separate occasions by Morrell before it was poorly cleared to the feet of Miller, about 25 yards from the goal. Miller lifted his head up and sent a searching ball to the back post and an unmarked Beck. Beck let the ball bounce once, took a touch with his thigh, and then sent a controlled volley with his favored left foot to the back post. The ball careened off the post right into the unsuspecting leg of Penn State’s Awodesu and into the net before he could clear.

The goal was Beck’s first since his freshman year, and the win is the first victory for MSU since Oct. 19, 2019 against Ohio State at DeMartin Stadium.

With the win, MSU improves to 1-2 on the season. The Spartans play Ohio State at home on Wednesday, however, the venue and time have yet to be announced.