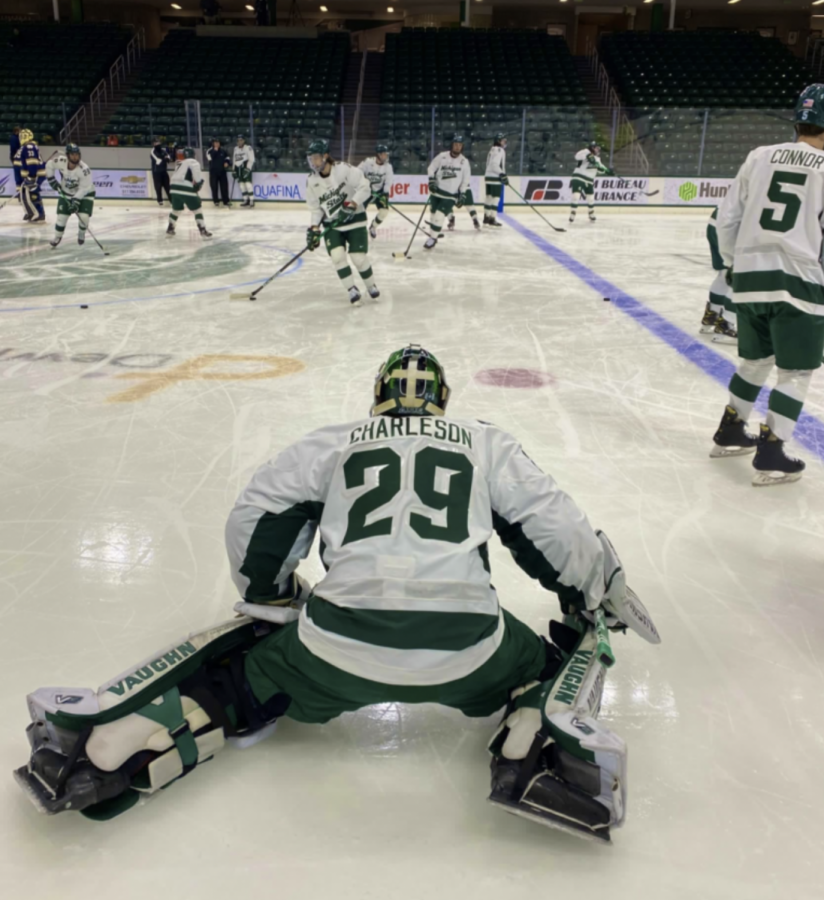 EAST LANSING – Michigan State and Notre Dame squared off on Friday afternoon in East Lansing for the third time this season. Behind a strong defensive effort, Notre Dame helped themselves in the tight Big Ten standings after winning game one 2-0 behind two points from Irish forward Landon Slaggert.

“It was a typical Michigan State—Notre Dame hockey game,” Spartan head coach Danton Cole said. “It was a good hard battle, played a lot in the trenches and I thought the guys did a decent job, and you come up a little bit short and it leaves a pretty bad taste in your mouth.”

The Spartans started freshman goaltender Pierce Charleson in net for game one; it was the first game all season Michigan State didn’t go with Drew DeRidder. Coach Cole decided to give DeRidder the night off; Charleson has seen action this season but only late in games when the Spartans are already out of the game. He came in tonight and played well for the Spartans and was given a good period to get comfortable; the first period didn’t see a goal or penalty.

“He’s popped in three different games and thought it would be a good time to get him a start,” Cole said. “He did a good job and Drew [DeRidder] did a good job getting him ready to play.”

After a relatively uneventful first period, the second period began with action almost immediately after the puck dropped. Four and a half minutes into the period, Notre Dame freshman Landon Slaggert went down on a rush and got his own rebound to put the Fighting Irish up 1-0. Both teams would get a power play during the second, and both threatened, but neither could  capitalize.

The final period was back and forth. Just before the halfway point in the third, Mitchell Lewandowski found Nicolas Müller on a rush to make it 1-1, but the goal that would have given Lewandowski his 100th career point at Michigan State was called back for offsides. Less than two minutes after the no goal, Notre Dame junior Alex Steeves made it 2-0 in what was his 14th goal of the season, which ties him for the  third-most goals in the country.

The Spartans weren’t able to generate any sort of offensive rhythm after that; the Fighting Irish escaped with a 2-0 win in game one, dropping Michigan State’s season record in game ones to 1-9-2.

“There’s some things we can do better and some things we have to do better,” Cole said. “I told the guys after the game we can work harder, we can play better, and we’re going to have to tomorrow, so start getting yourselves ready for a 3 o’clock game.”

Spartan defenseman Tommy Miller talked about the team’s goals the rest of the season after the game.

“A team goal was to build up some momentum going through into the tournament,” Miller said. “You can kind of see that with the basketball team, they’re starting to pick up some momentum and I think we are too. Our play is reflecting that the results aren’t there, but I’m confident and looking forward to seeing our last couple games here.”

Notre Dame (11-12-2) and Michigan State (7-14-2) will close out the season series on Saturday afternoon at 3 p.m. Saturday’s game will also be senior day for the Spartan seniors.