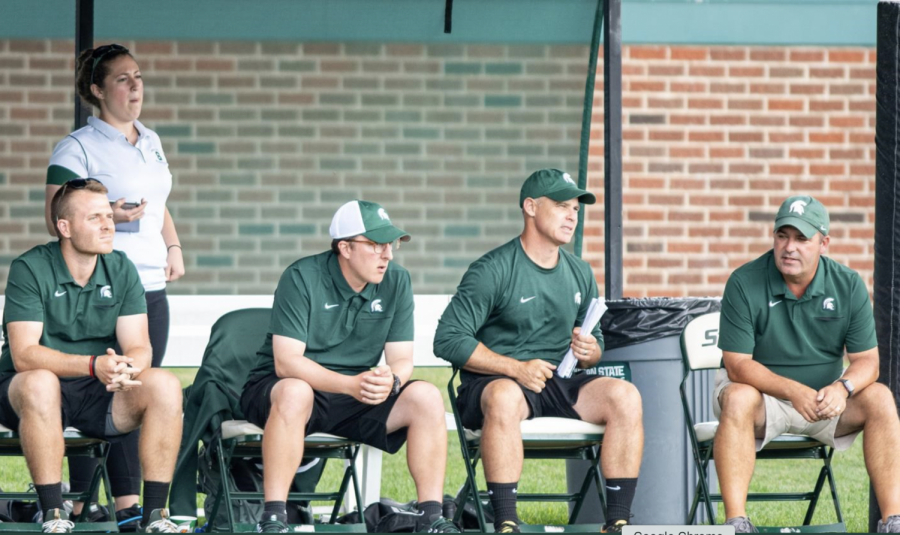 BRIGHTON, Mich. — In what was a hotly-contested affair, Michigan State lost 1-0 to Michigan in the state derby Tuesday night.

With the loss, the Spartans dropped to 0-2 on the season, while Michigan improved to 2-0.

MSU started well with all of the early attacking chances coming their way. Forward Farai Mutatu was at the center of the first two Spartan scoring chances. He put an early shot on target before having the best chance of the half for MSU 18 minutes in.

Mutatu broke away down the left wing on a breakaway after a defensive mistake from the Wolverines. Once in the box, Mutatu cut inside, but pulled his shot wide past the near post.

Michigan only had one high-quality scoring chance in the first half, but they made it count. Wolverine midfielder Kevin Buca slipped in behind the Spartan back line, cut back to drop two MSU defenders and then slotted it home coolly from 12 yards out.

“I was disappointed at how we gave up the goal. It kind of came out of nothing,” Rensing said “We can’t get beat in behind there.”

Just a minute later, Michigan defender Umar Farouk Osman went in late, high and studs-up into the shin of MSU defender Will Perkins. What looked to be a nailed-on red card was only punished with a yellow by the referee.

Justice seemed to be served less than ten minutes later when Farouk Osman made a sliding challenge from behind and saw his second yellow and was given his marching orders in the 42nd-minute.

“The first 45 minutes we actually played really well,” Rensing said. “We did some very good things.”

The second half began much as the first ended, with Michigan taking it to the Spartans. Even with a man down, Michigan controlled the game for the first portion of the second half, and MSU didn’t have a shot on goal until 15 minutes into the half.

MSU came close to tying the game off of a long free kick that went off the head of Oakland transfer Luke Morrell and then the head of midfielder Alex Shterenberg, but a wonderful save made by Michigan goalkeeper Owen Finnerty kept the game scoreless.

“Michigan was forced to protect the lead and to their credit they did a good job,” Rensing said. “When we were going back and forth, I think the game was better for us.”

The last 20 minutes featured a lot of MSU going forward but running out of ideas once they got into the final third. A few desperation heaves made it into the box, but the Wolverines took care of business in the back end, even while down a man for the whole second half.

“When we’ve had to make the game, so to speak, and break things down, that’s where we’ve struggled,” Rensing said “We know what we have to do and we’re going to go back to work.”

The two teams usually play with the Big Bear trophy on the line, but both sides decided to postpone the awarding of the trophy until the fall of 2021

The Spartans will look for their first win of the young season when they travel to No. 20 Penn State on Saturday. Kick-off is set for 2 p.m.