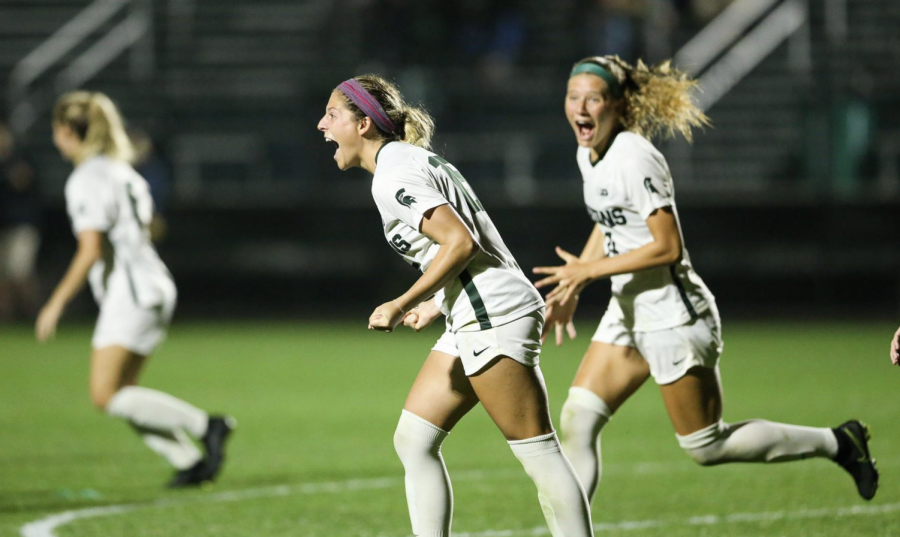 COLLEGE PARK, Md. – The Michigan State women’s soccer team debuted their 2021 Big Ten season with a thrilling yet unlucky 1-1 draw against the Maryland Terrapins. The Terrapins, who normally play at Ludwig Field, their outdoor soccer arena, hosted the Spartans at their football stadium, the Capital One Field at Maryland Stadium.

“What we said after the games is that we really showed that Spartan warrior mentality throughout the game. I think we all have a little bit of a bad taste in our mouths giving up a little bit of a deflection goal in the last two minutes of the game.” MSU head coach Tom Saxton said

Saxton started the game with a strong starting 11 that included forward Gia Wahlberg, goalkeeper Lauren Kozal and defender Bria Schrotenboer, who were all named in the Big Ten players to watch list for the 2021 season. All three players started for the Spartans last season as well.

The Spartans played at a very high pace at the start of the match. Players were recovering balls in the midfield, and they immediately created chances for the players out wide.

Forward Camryn Evans and Wahlberg were the standouts of the first 30 minutes, with each player getting a couple of shots on goal.

Defensively, the Terrapins were unpenetrable with Milan Pierre-Jerome at center back, and they countered dangerously when they got the chance.It was not until the last 10 minutes of the first half when the Terrapins started to test Kozal in goal and took control of the game. Fortunately for the Spartans, Kozal was outstanding in the first half, and her strong outing continued for the rest of the game.

The second half also started with high intensity from both sides. Saxton made adjustments offensively by subbing in midfielder Bella Jodzis and forward Paige Webber.

The Spartans were impressive defensively as they were able to contain the high press from the Terrapins; Saxton also demanded players to drop back and defend the counter. Still, the Spartans could not find a way through to the goal.

After a fantastic pass from Wahlberg to Webber, Webber took on two defenders on the right side of the box and crossed the ball into the middle where it deflected right to Wahlberg, who took two touches and clinically finished the counter-attack to put the Spartans ahead at the 62-minute mark.

Last season, Wahlberg scored nine goals and 18 points; she showed no signs of slowing down in the opening game this season.

After Wahlberg’s goal, the Spartans sat deep as the Terrapins continued to fight their way back into the game.

Just as the Spartans were waiting to celebrate their triumph, Terrapin forward Mikayla Dayes scrambled past two Spartans and took a shot to the lower-left corner of Kozal’s goal, which dramatically tied the game up with a minute left in regulation. As such, the game headed to overtime.

In the first half of overtime, both teams were making sure that they did not concede. It was a defensive approach on both sides and players on both teams began to be subbed off due to injuries/fatigue.

After 110 minutes of an intense, well-played match, the referee blew the whistle to indicate the end of the game.

Overall,  Saxton and his team will take many positives out of this first game and will use it as inspiration for the following game against Nebraska at home on Feb. 25.  This was a physical test for the Spartans since it was their first game since Oct. 20, 2019, 479 days ago.

“Ultimately, we really have to have a great perspective on things. We have had so much support from the medical staff and the administration, and all of us, especially the student-athletes, have been so tough going through these ups and downs with the COVID protocols with the stops and starts,” Saxton said. “It was a little bit surreal to actually get here and play. Now let’s stay safe and keep it going,”