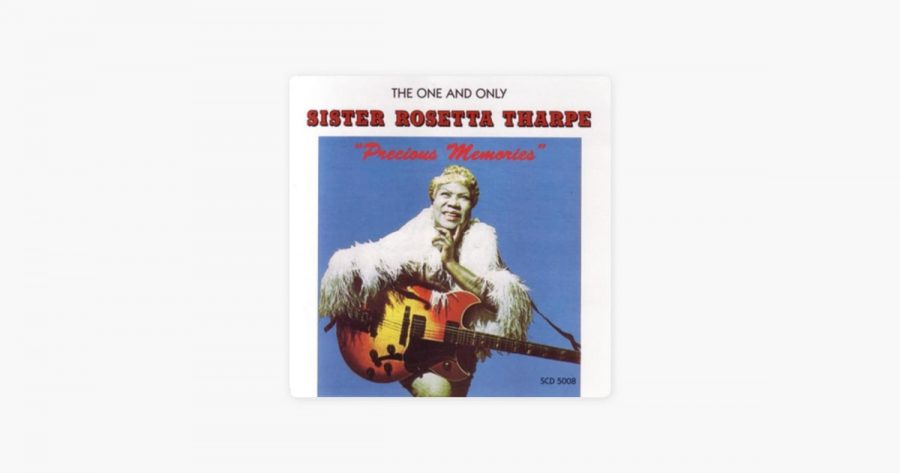 The soulful singer and expressive guitarist Sister Rosetta Tharpe is considered the matriarch of rock and roll, yet she is unrecognized by many. Tharpe was the first to record tracks with rock and roll’s signature distortion on her guitar, pushing music in a direction that would change it forever. She was able to further this new genre of music by mixing pre-established genres in a way that had not been done before, and inspired listeners by her unique combination of gospel, soul and the blues. Tharpe paved the way for the creation of rock music, and for someone so influential, it is almost sacrilegious that she is not a household name.

“Precious Memories,” released in 1956, showcases all the qualities of Tharpe that made her the godmother of rock and roll. The build up begins with a slow bass line coming from a piano, leading to a soulful guitar lick, played by none other than Tharpe. From there, her voice reverberates out, accompanied by an organ in the back, spiritually bringing listeners to the front row pew. At times throughout the song, the sincere playing of the guitar along with Tharpe’s deeply-felt vocals sounds more like a duet, as if her guitar is another entity in the room singing to us as well. It’s a hymn of few words, but Tharpe’s take on the composition has a way of providing a deeper understanding, moving the spirit within you.

Regardless of anyone’s religious stance, it is hard to deny the impact that Sister Rosetta Tharpe had on changing the path of music. Many famous artists, such as Eric Clapton, Chuck Berry and Johnny Cash, list her as an influential figure in their art. Most recently, Lizzo and her guitarist, Celisse Henderson, paid homage to Tharpe by performing with a Gibson SG Custom guitar, showcased right before an SNL performance of “Truth Hurts.”

Thanks to exposure like that, Tharpe’s name is beginning to receive the recognition she deserves. However, the influence she had on music remains relatively underrated, and as a black woman breaking barriers in 1940s America, credit needs to go where credit is due. Finally, in 2018 Tharpe was inducted into the Rock and Roll Hall of Fame, where previously a multitude of white men had earned spots despite benefitting a genre she created. “It’s been long overdue,” says Brittany Howard of Alabama Shakes right before playing a guitar lick that only Sister Tharpe could create, and performs “That’s All.”

We still have a long way to go, but thanks to performers like Lizzo and Brittany Howard, and listeners like us, we are keeping the memory of black creators alive. Sister Rosetta Tharpe was an innovator, and created a space for musicians of color like there hadn’t been before. “Precious Memories,” perfectly displays all the traits that make her an icon, and holds enough soul to make the most devout atheist into a believer. To forget her and her immense talent would be simply blasphemous.