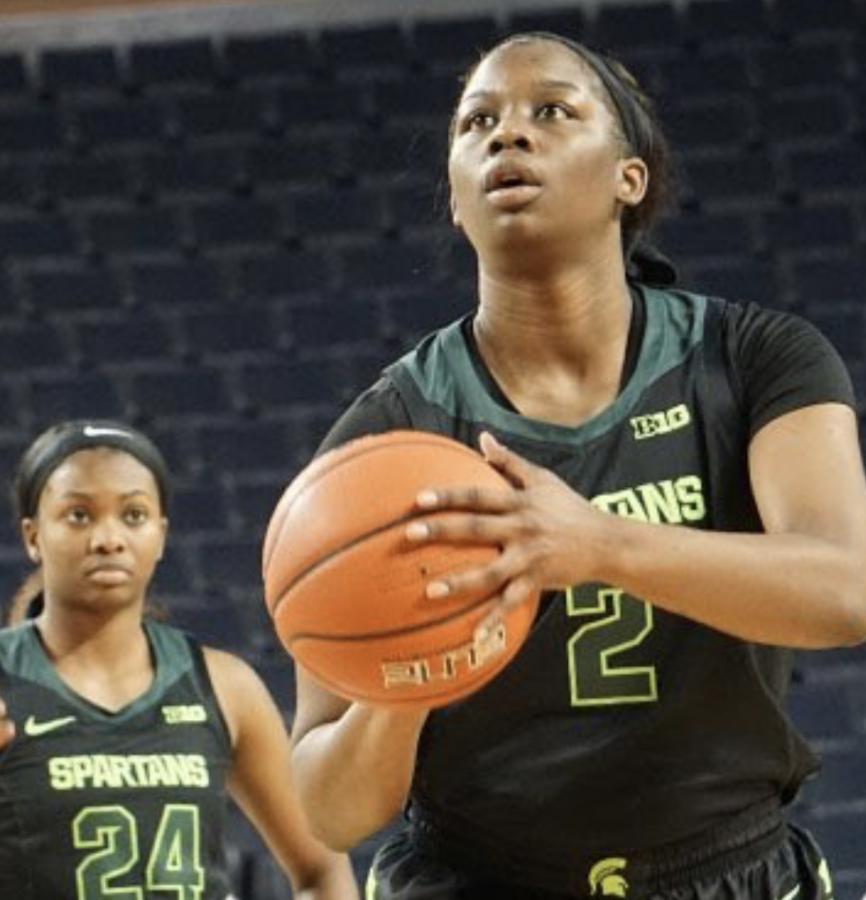 No. 11 Michigan successfully halted Michigan State women’s basketball’s comeback efforts in an 86-82 victory for the Wolverines on Tuesday.

With the loss, the Spartans drop to 11-6 on the season and 6-6 in Big Ten play. The Wolverines, meanwhile, improved to 12-1 overall.

MSU is now 0-5 against ranked teams, and five of its six losses have come against teams that are fifth or better in the Big Ten.

As far as rivalries go, this game lived up to the suspense. Michigan held a significant lead on the Spartans for the majority of the contest behind 31 points from junior forward Naz Hillmon, but a late second half comeback led by junior guard Nia Clouden made for an exciting in-state matchup.

“It was really fun to be able to compete with her,” Clouden said. “She’s a really great player. She’s had some really good games. I was happy that it was a competitive game, but I wish we would have come out with the win.”

Clouden recorded a career-high 34 points in the loss, putting her at 1,172 career points. She is now 21st on the MSU career scoring list. Her dazzling performance consisted of multiple converted and-1’s and triples at some of the most crucial points in the game.

Easy missed baskets down low made the difference for the Spartans at the half, as MSU trailed the Wolverines by 11 points. Michigan dominated the rebounding game and could not be stopped in the paint. Its first half scoring display was led by none other than Hillmon, who had 20 points at the break.

The Wolverines held their biggest lead when they led by 16 points with just under two minutes to go in the half.

MSU trailed by 13 points with just over a minute to play in the third quarter, but a converted and-1 from sophomore guard Alyza Winston kept the Spartans in the game. She finished the contest with 18 points and a steal off the bench.

“I think she [Winston] was just looking for her shot a little bit more,” MSU coach Suzy Merchant said. “We’re starting to see her kind of come back, which is what we need for sure, especially down the stretch here.”

Shortly after, Hillmon received her fourth foul of the game, igniting the Spartans’ hopes in the final moments of the third quarter.

Capitalizing on her team’s momentum, sophomore forward Taiyier Parks made a critical bucket down low in the final seconds of the quarter. The basket served as two of her four points off the bench, and it brought the Spartans to within 6 points going into the fourth quarter.

Clouden took over in the game’s final quarter, as she scored half of MSU’s quarter total points and half of her second half total with 10.

In the end, Hillmon reminded MSU who it was dealing with, when she made three pivotal layups in the final minutes of the contest.

“She’s [Hillmon] just an absolute beast, and she works her butt off, and she plays harder than anyone in the country,” Merchant said. “That’s a fact.”

Michigan had 16 assists, compared to the Spartans’ three assists in the matchup.

“That was a problem because we had been top-five in the country in assists and assist to turnover ratio, so that was a little disappointing,” Merchant said. “Second half, we did try to put the ball on the floor a little bit more — more of that dribble-drive kind of action — which leads it to less assists sometimes because you’re putting the ball on the floor, trying to get to the rim.”

Michigan State will turn its attention to Purdue (3-10 in conference play) at home on Sunday, as it looks to ascend in the Big Ten standings before the regular season ends. The Spartans previously defeated the Boilermakers 71-64 on Jan. 3.