The President and BLM: An Ongoing Ideological Battle 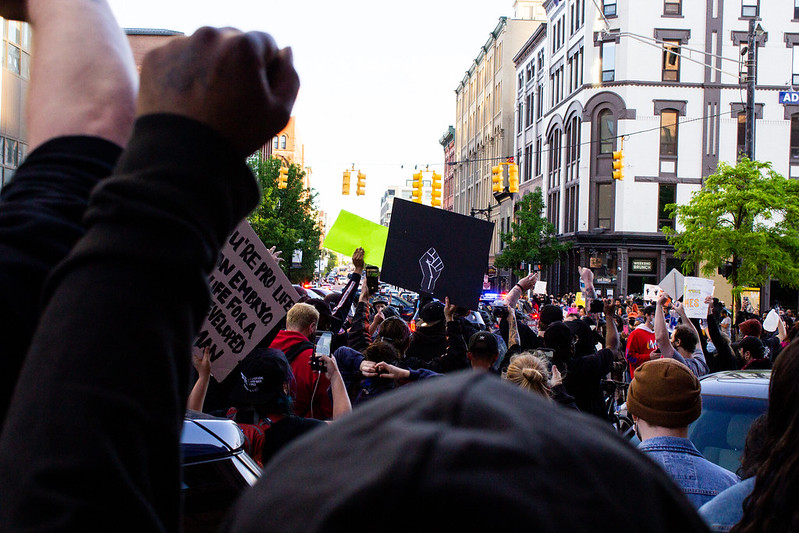 Protesters gather in Grand Rapids on May 30, 2020/ Photo by Stephanie Stapert (WDBM)

The topic of racial inequality and bias has been on the minds of many Americans over the past year, with the tragic deaths of black Americans at the hands of police officers becoming rallying points on the hunt for racial justice. The loose-knit group Black Lives Matter (BLM) has been the spearheading organization that has stepped forward to become both a symbol for those fighting an unjust system and a target for those in the system wanting to keep control.

However, while the BLM movement has garnered immense popularity, its voice is still not the one in charge, and even after a change in political power at the top with the inauguration of President Joe Biden, discrepancies remain between what the current leading administration is pushing politically, and the changes groups like BLM have been demanding.

BLM did not materialize out of thin air. The idea of “Black Lives Matter” has been around since 2013 with the acquittal of officer George Zimmerman in the death of African-American teen Trayvon Martin. Since then, the group has become increasingly more organized, although it still lacks a regular leadership structure (most likely done on purpose). BLM has, however, created specific and clear demands that they believe will allow for inequality to be neutered, and racial bias in America to recede.

BLM has officially created seven demands, and lists them on their website. These range from investigating the Capitol riot to defunding the police to passing the BREATHE Act. The demands, in general, have a focus on keeping their movement going and dismantling the institutions they believe allow rampant racism and inequality to flourish.

BLM, or at least the idea surrounding it, was instrumental in convincing large groups of black voters and young voters to let their voices be heard, and it could absolutely be argued that it was critical to the Biden administration’s rise to power. Biden even became the first President in history to explicitly condemn white supremacy in his inauguration speech.

With that being said, this does not mean that the Biden team and BLM see eye to eye on every measure, and although Biden has stated that one of his immediate focuses within his first 100 days will be race, he has not cited the specific concerns of groups like BLM.

The Biden plan to advance racial equity that is outlined on his website has notable differences to the official demands of BLM. Biden’s approach is noticeably more economic-based as opposed to the social ideas proposed by racial equality groups.

Biden’s focus seemingly will be on things such as housing development, equal opportunity and compensation in the workforce, and small business advancement. It noticeably lacks specific attacks on the police force and systemic problems within the government. In fact, the only two mentions of “systemic racism” are on housing and calling for a “national reckoning” on justice in America without going into specifics.

It seems as though the Biden administration will not be acting on what it may believe to be too extreme of measures proposed by BLM. Biden has pushed early on a want for “cooperation” between the right and the left political parties, but where does that leave groups like BLM, who technically have no political alliance?