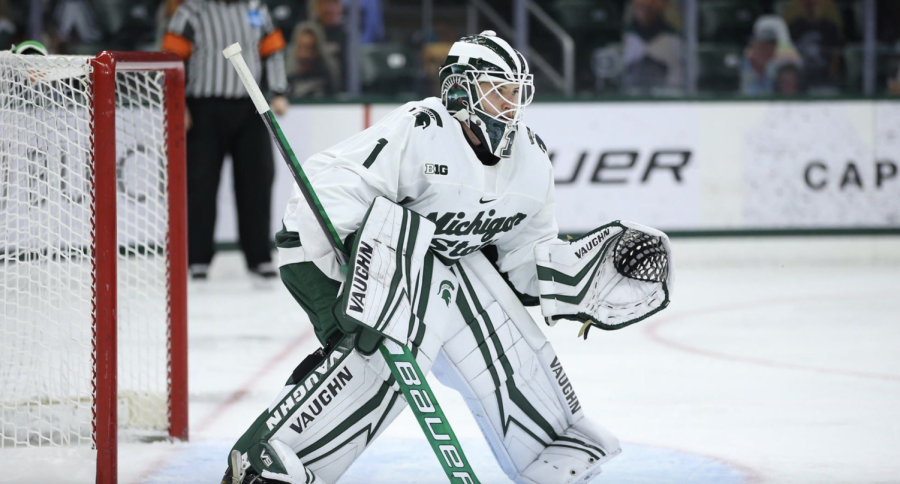 EAST LANSING – After a thrilling ending to game one on Sunday afternoon, the Sun Devils and Spartans faced off for the fourth and final time this season on Monday night. The Spartans earned the split with a 2-1 win over the Sun Devils behind a strong game from Spartan goalie Drew DeRidder, who stopped 32 out of 33 shots.

“Nice to see the guys come out on top,” Spartan head coach Danton Cole said. “Usually, in a game like this, it’s kind of an ugly goal, that was an ugly one, but we’ll enjoy it, enjoy the win, rest up and get ready for Minnesota.”

The first period of game one saw a goal 13 seconds into the game, for reference, game two of the series didn’t see a shot on net until 13:56 left in the period. Michigan State opened the scoring shortly after a power play when Spartan sophomore forward Jagger Joshua scored his fourth goal of the year by burying a loose puck in front of the Sun Devil net just after a Spartan power play ended. If you missed the goal, you can watch it here.

Arizona State had a poor start to the game. The Sun Devils took two penalties and slowed a goal before they put a shot on net with 2:54 left in the first period. Despite the poor start, they went into the first intermission only down 1-0.

The poor start didn’t extend into the second; the middle period was all ASU. After logging just two shots in the first period, Arizona State put 15 shots on net in the second. Forward Nicolas Müller committed two penalties in the middle period and the Spartans were able to kill the first one, but not the second Müller penalty. With 1:26 left in the second, forward  Demetrios Koumontzis buried a rebound on the man advantage to tie the game at one apiece.

You can watch that goal here if you missed it.

The Sun Devils were able to take advantage of the power play, but the same can’t be said for the Spartans. Michigan State went 0-for-2 on the power play on Monday, bringing their season total to 4-for-51 on the man advantage, a measly 7.84%, which is the third-worst conversion percentage in the country.

The third period began with both teams playing passive to avoid allowing the other team to take the lead, but it was the Spartans who broke through. Joshua drove to the net and created a pile up in front of Arizona State goalie Cole Brady. The puck was loose and Nicolas Müller—who took the penalty that allowed  Arizona State to tie it up, buried the loose puck. The goal was reviewed for goalie interference, but the call on the ice stood. Forward Mitchell Lewandowski assisted the game-winning goal, putting him at 99 career points at Michigan State.

Müller hit the crossbar just before the Spartans’ first goal and said how badly he wanted to make up for it.

“I was so close,” Müller said. “I really wanted to have the game winning goal, Jags [Joshua] makes an unbelievably good play driving to the net, just go to the net and good things happen.”

The Müller goal was enough to win the game and Michigan State won 2-1 to earn the series split.

“To get that win was really important,” Müller said. “I think if we can get dangerous in the power play, we can definitely match every team and get a lot of wins in the last eight games plus the playoffs.”

Michigan State (7-11-2) will only have a couple days to rest before traveling to Minneapolis to face No. 4 Minnesota on Feb. 18-19.