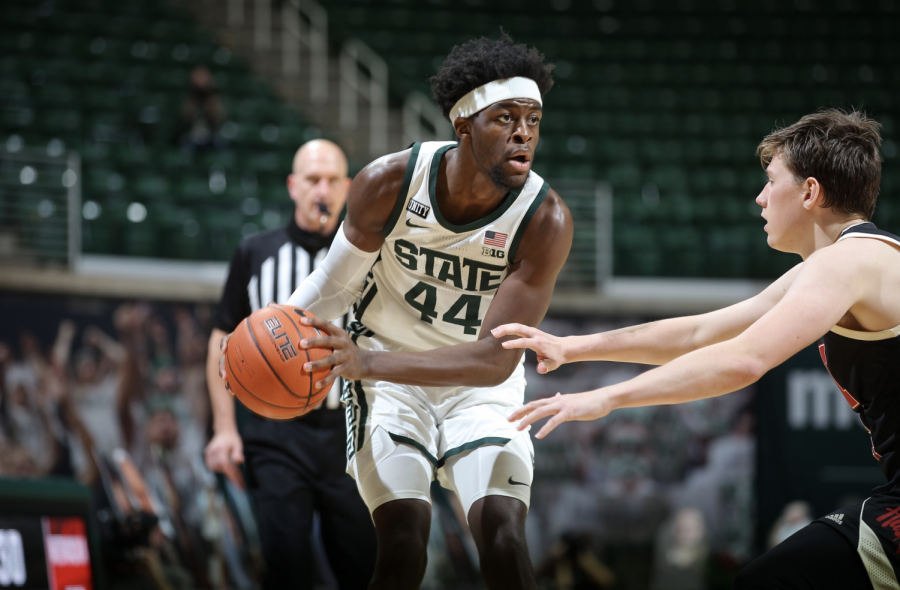 EAST LANSING — After the Michigan State Spartans nearly upset the Iowa Hawkeyes on the road on Feb. 2, the sequel was a much different story. The No. 15 Hawkeyes rolled into the Breslin Center and took down the Spartans by a whopping 30 points, winning 88-58.

The game started physically intense, as MSU’s Marcus Bingham Jr. and Julius Marble, as well as Iowa’s Luka Garza, each picked up a foul in the first two-and-a-half minutes. The Spartans jumped out to a quick 4-0 lead, but the success was extremely short-lived.

Surprisingly to most, Garza (25.9 points per game entering Saturday’s game) had only six points on 2-for-5 shooting in the first half. A big reason for that was Izzo throwing a bunch of different looks Garza’s way defensively, as Bingham, Marble, Thomas Kithier, Malik Hall and even freshman Mady Sissoko got a chance to defend the offensive juggernaut. It was Iowa’s Joe Wieskamp and Connor McCaffrey with 10 points apiece that really gave the Hawkeyes such a lift.

Leading the Spartans at halftime was Aaron Henry with eight points, but no other Spartan had more than five. More concerning was the fact that no Spartan had a positive plus-minus in the first half. Despite his players’ poor performances, Izzo took all the blame on his shoulders.

The Hawkeyes went on a 13-2 run in the middle of the half, taking as much as a 21-point lead, as the Spartans missed seven shots in a row. The Hawkeyes took a 19-point lead into halftime, ahead 46-27.

The second half was much of the same. The Spartans cut the Iowa lead to 15 a couple minutes in, but back-to-back 3-pointers from Wieskamp put those hopes on the back burner once again. This kickstarted another 3-point barrage from the Hawkeyes that never really ended.

Garza finished with — by his standards — a very pedestrian eight points and eight rebounds on just 3-for-11 field goals and 2-for-7 free throws. It’s safe to say the Spartans were able to contain him and that was likely their biggest focus. The problem for the Spartans was their inability to defend the Hawkeyes from beyond the arc, as the Hawkeyes finished the game shooting 13-for-25 (52%) on 3-pointers. This was the most glaring difference in the one-sided affair, with the Spartans shooting just 6-for-21 (28.6%) from deep.

“We were picking our poison,” Izzo said. “We were going to do a good job on Garza, but you don’t want to be taking away the two and giving up the three.”

Wieskamp led the Hawkeyes with a stellar 21 points (7-for-13 field goals, 5-for-7 from deep), seven rebounds and three assists. Connor McCaffrey also poured in 16 points (4-for-6 from deep) and Jack Nunge posted an 18-point, 11-rebound double-double.

“(Wieskamp) has been on fire,” Izzo said. “He deserved every bit of it. He’s one of the better shooters in this whole conference. We just didn’t guard him as good as I thought we would.”

The Spartans’ woes continue, as does the speculation as to whether they’ll make or miss the NCAA Tournament. They’ll hit the road to take on the No. 24 Purdue Boilermakers on Tuesday. Tip-off is set for 7 p.m.

“We don’t have time to hang our heads, we still have season left,” Langford said. “At the end of the day we have to keep learning, watch this film and have a next-play, next-game type of mindset.”