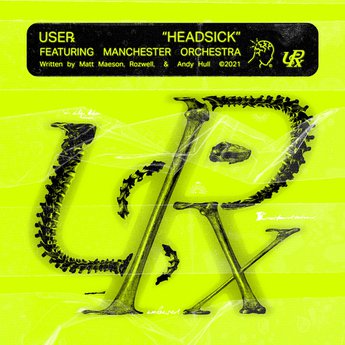 There’s something about music that can open us up and make us feel emotionally vulnerable, especially with songs that make us feel reflective and dig into our past. The band USERx is all about being emotionally honest, and their new single “Headsick” doesn’t stray from that.

USERx is the collaboration of hometown friends Matt Maeson and Rozwell. The Virginia Beach natives wanted to combine their distinct sounds and created USERx, to be an expression of their creativity. So far, they’ve released three singles, with a full EP coming out sometime later this year.

“Headsick” is a collaboration with indie rock band Manchester Orchestra. In his email announcing the collaboration, Matt Maeson discussed how Rozwell has been an inspiration for him in his own music:

“Manchester Orchestra has always been my favorite band. Rozwell and I have probably spun “Leaky Breaks” a thousand times over. Andy’s songwriting, specifically, continues to have a huge impact on my own writing. The way he writes and the subjects he chooses to write about are very human and admirable. That, combined with the way the band changes dynamics in such creative ways depending on where the emotion or lyrics lead the song, has inspired time and time again. All I can say is collaborating on “Headsick” with them is an incredibly validating feeling and I’m honored that they would lend their greatness to us for a song that we’re all very proud of.”

The song begins soft, with a light beat, and continues to build into an explosive instrumental break towards the middle of the song. Maeson, Rozwell and Manchester’s Orchestra’s lead singer Andy Hull’s voices all complement each other perfectly. The song is emotional and raw, what one expects from Maeson, mixed with the powerful instrumentals of Manchester Orchestra.

The video shows Maeson and Rozwell, both as children and now. The children version of them are having fun and just playing with each other, and it’s an illustration of their strong friendship over the years.

The song is beautiful and meaningful, while being an alluring display of sentiment and a song that will easily be stuck with you throughout the day.