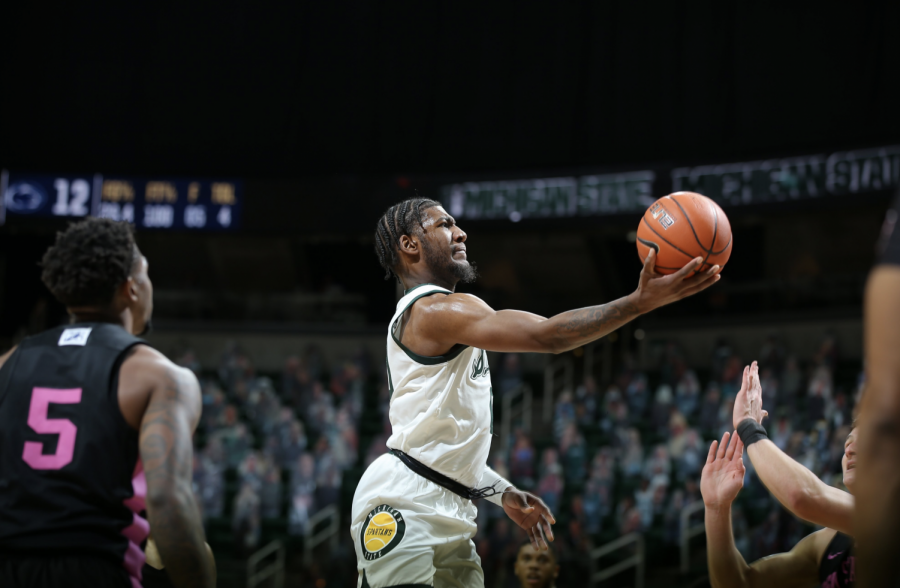 “It wasn’t pretty, but another great defensive performance,” Izzo said. “We’re still a work in progress, but I was proud of this team…What I liked about it was we gutted it out in the end.”

The starting lineup for the Spartans featured a brand new five. Izzo threw Marcus Bingham Jr. and Malik Hall a bone, as typical starters Joey Hauser and Thomas Kithier came off the bench. The change was one that Aaron Henry said “everybody was comfortable with,” as Hauser was the one who suggested he should come off the bench.

“I love guys who can self-evaluate, and he knows he hasn’t been playing good,” Izzo said. “That takes a man to do that. It really takes a man then to go and back it up by playing your butt off.”

Hauser was aggressive in his bench role, a good sign for the Spartans as the junior was held scoreless against Nebraska last Saturday. He got his first bucket almost instantly after checking in and finished the first half with nine points (4-for-6 from the field).

“Joey Hauser is still a very, very, very important part of this team,” Izzo said, “whether I start him or (not).”

Henry looked like the best player on the floor in the first half, also scoring nine points and dishing out a pair of assists. He continued his role of quarterbacking the defense, as the Spartans held the Nittany Lions to 32.3% from the field and just 1-for-10 from deep.

“We mixed our lineup up a little bit, but still the straw that stirred the drink was Aaron Henry,” Izzo said.

The hard-nosed defense aided the Spartans in grabbing as much as a 10-point lead, and they went into halftime leading 32-24.

Eight minutes into the second half, an Izaiah Brockington 3-pointer cut the Spartan lead to just one. A minute later, he assisted Sam Sessoms for the tying 3-pointer.

Penn State took its first lead of the second half with just over six minutes to play as Myreon Jones drove for an acrobatic layup. The two squads would continue trading baskets for the rest of the way… until things really tightened up and the typical Spartan brand of basketball revealed itself on defense.

“We made sure we understand this is winning time,” Henry said of the late-game mentality of his team.

With two minutes to play, Hauser made two free throws to even the score at 58. After a defensive stand by the Spartans, Bingham also hit a pair of free throws following Henry’s offensive rebound and pass underneath. This gave the Spartans a 60-58 lead with 1:14 remaining.

Penn State’s offense used the full 30-second shot clock before Brockington missed a 3-pointer short that was well-contested. Izzo called a timeout with 35 seconds to play and 18 on the shot clock. In an attempt to get the ball to Hall in the paint, Henry’s pass was tipped and stolen, giving the ball back to Penn State for a chance to tie or take the lead.

PSU coach Jim Ferry called timeout with 16 seconds to play and the shot clock turned off. The Nittany Lions perfectly executed their ensuing offensive set, getting Myles Dread a wide open look at a 3-pointer from the left wing, but he missed it.

Joshua Langford grabbed the rebound and was fouled with eight seconds to play, heading to the line for the one-and-one free throws. He missed the first, however, and Dread came barreling back down the floor to take another 3-pointer from the same exact spot. It missed yet again, as the Spartans held on for the two-point victory.

Henry finished with 20 points and Hauser with 11. Hall and Bingham combined for 16 points, 14 rebounds and two blocks in their starting roles.

John Harrar led the Nittany Lions in scoring with 17 points and rebounds with 14. Jones pitched in 15 points as well.

Langford finished with only five points, but reached the 1,000-point plateau in his college career. Izzo mentioned that the team will celebrate the accomplishment in the future when fans are able to be in the arena.

The Spartans will look to keep it rolling on Saturday as they welcome Luka Garza and the No. 15 Iowa Hawkeyes into the Breslin Center. Tip-off is set for 2:30 p.m.