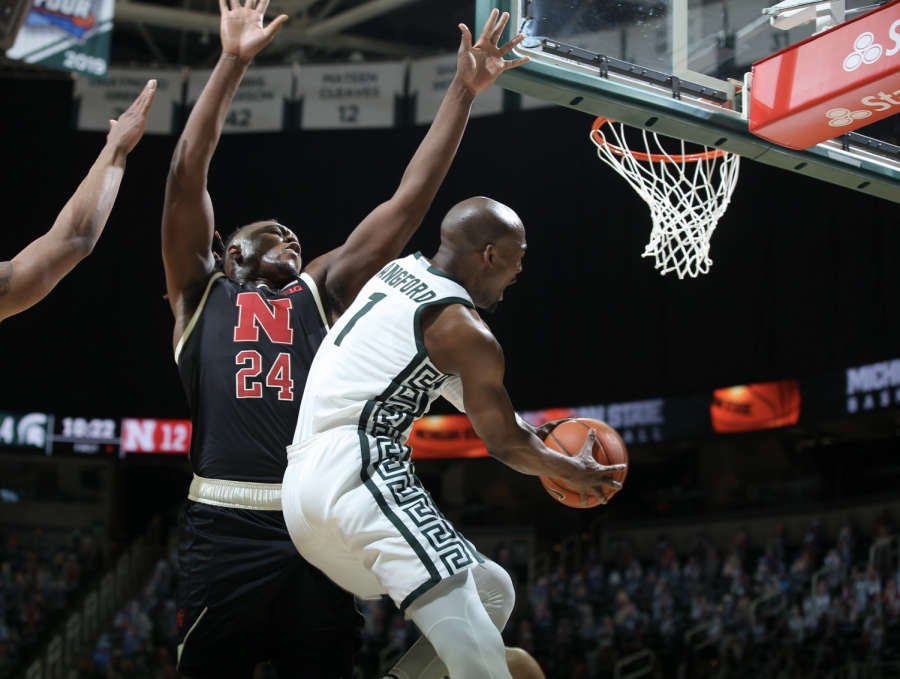 EAST LANSING — Michigan State basketball was back in action Saturday night, as the Spartans welcomed the Nebraska Cornhuskers to the Breslin Center. Despite some offensive struggles, the Spartans were able to secure a 66-56 win.

“I did not feel like we were ready to play tonight,” MSU coach Tom Izzo said. “I don’t know if it was because of their long lay-off and the fact we beat them pretty bad at their place.”

Although the Spartans got the win, it didn’t come pretty. Yet again, they experienced turnover woes, turning the ball over 22 times. Foul trouble was also an issue for the Spartans in this one, as the team had 24 team fouls. Starting forward Joey Hauser fouled out of the game with 3:58 to play. He exited the game with zero points and just one rebound.

“The turnovers are something that just depletes our team and energy,” Izzo said. “I honestly should probably be happy to have 22 turnovers and win a game.”

Without any point production from Hauser, Michigan State looked to both Joshua Langford and Aaron Henry. Langford finished the game with a team-high 18 points on a solid 7-of-12 shots. Henry, on the other hand, had 16 points on 6-of-14 from the field.

“I just tried to come out and give my best effort for my team,” Langford said. “We got a win, we can take a deep breath. At the same time, we can’t get complacent. We need to have a fine line of balance between enjoying the win and not getting content…We need to put the past in the past in order to be the best in the present.”

With Gabe Brown returning to action for the Spartans for the first time since Jan. 8 due to COVID-19, he brought a much-needed spark plug for the team’s energy level. Brown made two impressive shots early on, while also bringing in a first-half team-high five rebounds.

“Gabe gave us something, he brought us energy,” Izzo said. He mentioned that Brown is a workhorse, and a guy that can always give them burst the team needs. “Gabe’s just a grinder.”

Coming into the second half, Nebraska looked to get its offense going. This lasted for the first few possessions, as the Huskers started off 3-of-4 from the field. However, the rest of the half looked very similar to their first, where the team just couldn’t seem to find the bottom of the net often.

To give the Spartans some credit on the defensive end for Nebraska’s offensive woes, the team did finish with seven steals and seven blocks. Marcus Bingham Jr. was active all night, finishing with two blocks to complement his three steals. Henry also finished the night picking up two steals and swatting away two shots.

Michigan State was able to dominate the glass on both ends of the floor. The Spartans finished with 47 rebounds, with 12 on the offensive end. Nebraska secured 34 rebounds with 10 offensive rebounds.

“There’s a little pressure on us right now, and I kind of like that,” Izzo said, as his Spartans are currently on the bubble for the NCAA Tournament.

Michigan State will be back in action Tuesday night, hosting Penn State. Tip-off is set for 7 p.m.