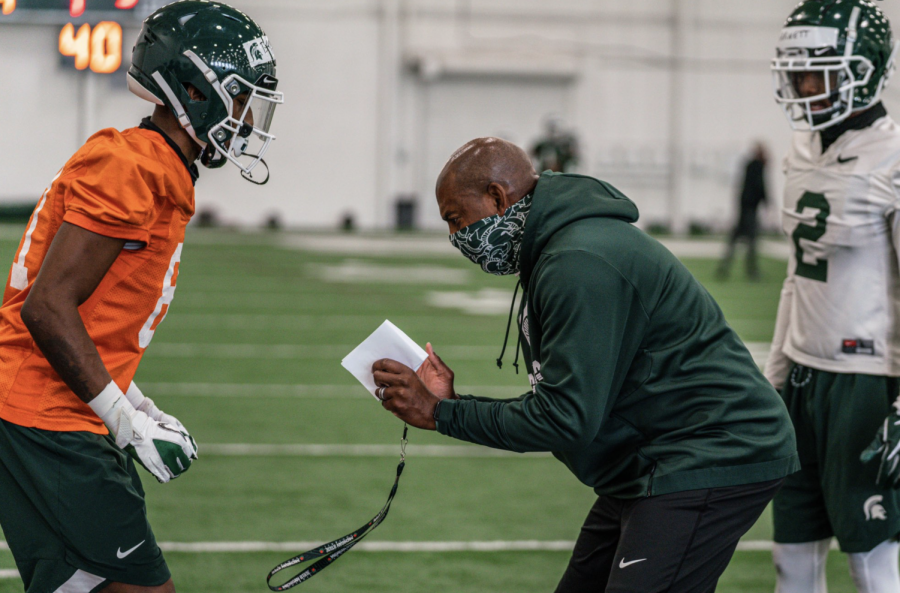 EAST LANSING— Michigan State coach Mel Tucker, along with early enrollees Kameron Smith and Hampton Fay, spoke with the media Wednesday. To kick the presser off, Tucker announced the signing of Keon Coleman.

“Keon is a very special player,” Tucker said. To go along with his height and length, Tucker mentioned his ability to get open with his speed and quickness.

Coleman will not be coming in as just a football player, however, as he will also be joining the basketball program as a walk-on. Coleman held many Power Five offers for both sports. Tucker states that Michigan State basketball coach Tom Izzo was instrumental in garnering the commitment of Coleman.

“Playing both sports will be all about communication between the two sports,” Tucker stated.

Tucker then spoke on a few of the transfers coming into the Spartan program. Quarterback Anthony Russo has “all the traits” to be an NFL quarterback according to Tucker. The quarterback room will be competitive this year with Russo, Payton Thorne, Theo Day and Hampton Fay.

Transfer running back Kenneth Walker has impressed the Spartans early on. Tucker mentioned that he has good contact strength, along with the fact that Walker is well on his way to setting some records in the weight room. Walker should have three years of eligibility remaining. Fellow transfer Jarrett Horst has also looked impressive so far, as Tucker mentioned that he will immediately be competing for a starting spot on the Spartan offensive line.

Tucker then mentioned the promotion of Chris Kapilovic to assistant head coach along with the promotion of Travares Tillman to cornerbacks coach. Harlon Barnett will move to the title of secondary coach.

Even with all the incoming transfers, Tucker emphasized heavily throughout the session that the Spartans are not done with finding guys they want for the program. He expects the team to add around nine more guys to the roster all the way through fall camp.

With recruiting during the COVID-19 pandemic presenting challenges, Tucker and his staff have still found their way to recruit. Due to NCAA regulations, programs are unable to officially host any recruits on campus and every communication with recruits must be virtual. This also was true for early enrollee, tight end Kameron Smith.

Smith said that when he moved into his dorm on campus, that was the first time he met Tucker face-to-face. Even without getting a chance to meet the staff in-person, Smith still knew East Lansing was where he wanted to be.

Allen committed to Michigan State early on in the recruiting process because “the opportunity could close very quickly.” He advised fellow recruits to “trust your heart and go where you feel like you’re most wanted.”

Fay, similar to Allen, has transitioned smoothly to MSU. Both are from Texas, so having that connection has helped them bond early on. They both stressed the fact that the coaching staff has played an impactful role in helping the newcomers transition easily.

The Spartans still have months to go until the 2021 season officially kicks off, but they are wasting no time in getting better. Tucker said all the guys in East Lansing have bought in and want to be here, and that “the team is built in the weight room.”  With spring practices set to begin shortly, Tucker and his team aren’t going to be wasting any time with preparations for the upcoming season.