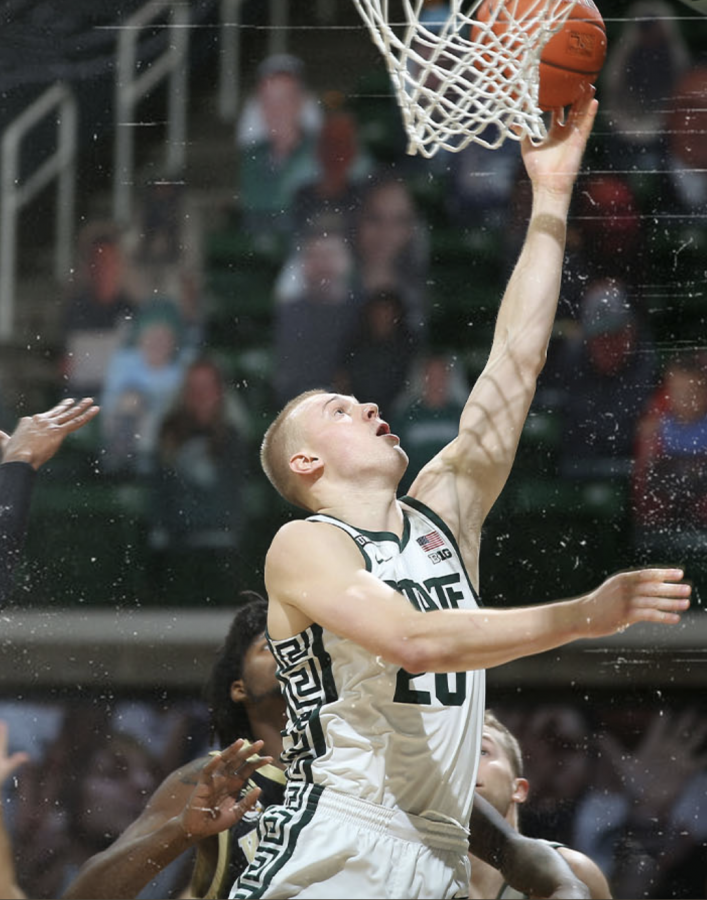 EAST LANSING — Everything had gone wrong for Michigan State heading into Tuesday night’s game at the Carver-Hawkeye Arena. The Spartans were coming off a 67-37 blowout defeat at Rutgers and a 79-62 loss to Ohio State on Sunday. Despite strong performances from Aaron Henry and Joshua Langford, the Spartans would fall 84-78 to Iowa on Tuesday night.

The Spartans seemed to round back into form in the first half of the game with a strong start. Coming into the game, MSU was the lowest-scoring team in the Big Ten, but the Spartans shot the ball a lot better against Iowa.

The Spartans shot 12-for-29 from 3-point range, as it took them just  15 minutes to score more points than they did in the Rutgers loss with 37.

Another positive was the 20-plus second-chance points the Spartans would get in the contest. Ball movement was also a strong point for MSU with lots of good looks to shoot.

“Had we played this way we would’ve won a lot of games,” Tom Izzo said. “But we just aren’t there yet and we don’t have that much depth.”

The Spartans came out of the gates firing with an early 18-8 lead over the Hawkeyes. Henry and Langford combined for 15 points from the field in the opening minutes of the contest. Michigan State did a really nice job of getting points on the break with Iowa struggling to settle into its defense.

The Hawkeyes struggled at first from the field, making just one of their first seven shots. Iowa would then make five of their next six shots from the field. This was only good enough to make the game 26-17 with the Spartans leading due to making all six of the three-pointers they shot to start.

The Spartans would then proceed to go cold and make just one of their next seven field goals and let Iowa back into the game, making it just a 28-23 MSU lead.

Iowa would then score seven unanswered points and narrow the Michigan State lead to 37-35. Jack Nunge would contribute 11 points in the first half and help the Hawkeyes make the run.

MSU would then go on another dry spell and Iowa would claim a 48-43 lead at halftime. The Hawkeyes would get 24 points off the bench before halftime from guys like Nunge, Joe Touissant and Keegan Murray.

The relentless Luka Garza couldn’t be guarded with 15 points from the post in the first half. The Spartans’ struggle to guard Garza and Nunge would result in five Michigan State players getting two personal fouls in the first half.

To start the second half, Garza would become just the second player in Iowa history to reach 2,000 career points.

Both teams exchanged buckets for a few minutes after halftime. MSU would then score seven unanswered points and knot the score at 57. Iowa wasn’t getting the ball to Garza as much in the post like in the first half.

The first part of the second half was extremely exciting with a Patrick McCaffery dunk and a Henry ankle-breaker on Joe Wieskamp. Iowa would hold just a 67-66 lead with just under eight minutes to play in the second half. The foul woes would continue for MSU, with Marcus Bingham Jr., Thomas Kithier and Joey Hauser having to sit a good chunk of the second half.

“I thought there were some ridiculous calls,” Izzo said. “I don’t say that often.”

Garza would help the Hawkeyes score six unanswered points late in the game to extend their lead to 79-70.

Then, a 3-point-play for Hauser and a fast-break layup from Henry narrowed the Hawkeyes’ lead to 79-76 with just under two minutes left.

Kithier would put in a tough layup inside to make it a two-point game with 63 seconds to play. Then, on the ensuing possession, Iowa committed a shot clock violation as Garza couldn’t get the shot up in time.

A few late throws by Iowa and a defensive stop would ultimately put the game away for the Hawkeyes, who ended up taking 20 more free throws than the Spartans in the win. Henry finished with 24 points and Langford with 15.

“You’ve got to have the mentality to lock on the present moment and focus on now,” Langford said.

The Spartans look to snap their four-game losing streak when they head back to the Breslin Center to play Nebraska on Saturday. Tip-off is set for 6:30 p.m.