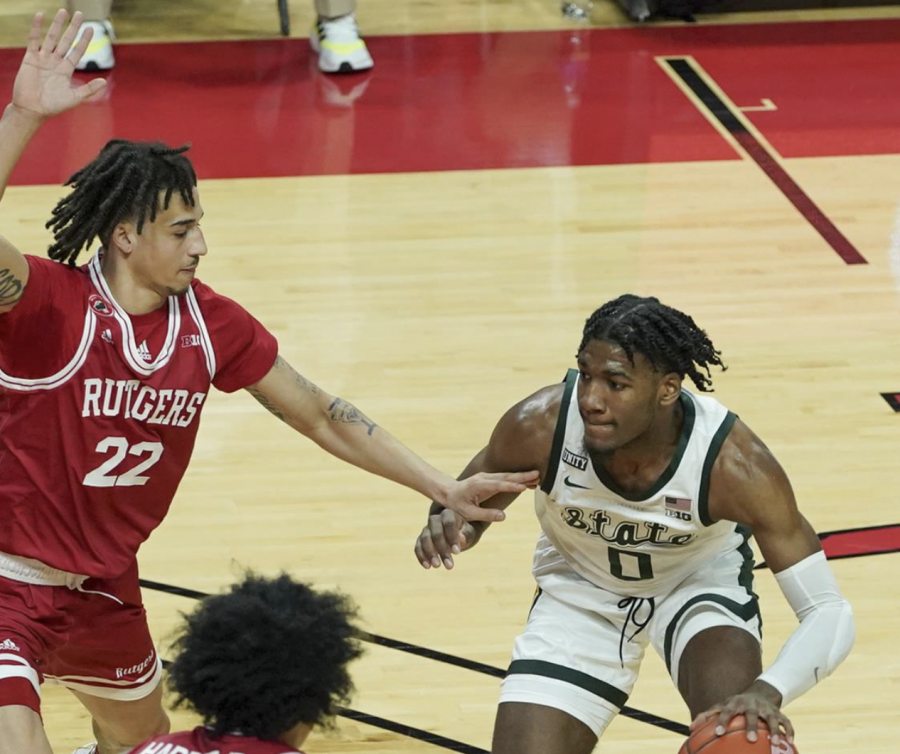 Aaron Henry tries a create his own shot while being hounded by Rutgers guard Caleb McConnell/ Photo Credit: Rutgers Athletics

EAST LANSING — Michigan State continues its attempt to navigate the gauntlet of the Big Ten schedule Tuesday in Iowa City. The Spartans are set to play their second game against a high-caliber opponent in three days entering the matchup with No. 8 Iowa. MSU was defeated by No. 7 Ohio State on Sunday, 79-62.

Here are some things to keep an eye on as the Spartans take on the Hawkeyes:
Can MSU’s offense get going?
MSU’s offense was clicking in the nonconference schedule, including a game where the Spartans dropped 109 points against Oakland. That has not been the case lately, with MSU shooting just over 30% in the loss to OSU, including 5-for-24 from three. Prior to that contest, against Rutgers, the Spartans managed only 37 points (MSU’s second-fewest in the shot-clock era) on 28.6% shooting and 4-for-20 from deep.

However, if there was a stretch for the Spartans to get things going, it would be this one. MSU’s next three opponents all rank in the bottom of the Big Ten in scoring defense with Iowa (12th in Big Ten, 267th in NCAA), Nebraska (13th, 262nd), and Penn State (Last, 288th) all due up.
Will the Spartans have an answer for Luka Garza?
Iowa’s senior big man Luka Garza spent most of last season terrorizing opponents, and it’s been much of the same this season. MSU was one of the few exceptions to that rule in 2019-20, as Garza only managed 20 points on 21 shots in the Hawkeyes’ loss to MSU in East Lansing. A major part of that effort from the Spartans was centered around the 2019-20 Big Ten Defensive Player of the Year, Xavier Tillman Sr., who is now in the NBA with the Memphis Grizzlies.

MSU’s interior defense has struggled this season, to say the least. There have been flashes of production from all of the Spartans’ big men, but the end results have not been great, with the latest big man to feast on MSU coming in the loss to OSU when E.J. Liddell notched 20 points for the Buckeyes.

Garza is a whole different animal, leading the nation in scoring with 26.4 points per game. The Spartans will need to throw a lot of different players at him and will need the best performances of the season from Thomas Kithier, Marcus Bingham Jr., Julius Marble, Malik Hall and Mady Sissoko.


Can the Spartans’ supporting cast match the Hawkeyes’?
The Spartans will have their hands full with Garza, which puts a lot of the game on the supporting cast for the Hawkeyes. If MSU is able to limit the rest of Iowa’s scorers, this game could stay close. Joe Wieskamp (14.8 PPG) is the only other Hawkeye averaging double digits in scoring. Iowa’s fourth-leading scorer and best 3-point shooter, C.J. Fredrick is questionable for the game with a leg injury. If he is unable to go, freshman forward Keegan Murray (6.8 PPG) will make his second-straight start. The Hawkeyes have lost back-to-back games since starting 6-1 in Big Ten play.
Prediction
The Spartans will be more motivated than ever, as they have fallen from No. 4 in the AP poll in mid-December to projected out of the NCAA tournament. Iowa is also coming off back-to-back losses, and MSU is the only team in the Big Ten that Garza has never beaten. If Fredrick plays, the Hawkeyes will have too many weapons for the Spartans to handle, even if their offense gets going.
Final: Iowa 83, MSU 70
Follow Zach Surdenik on Twitter at @ZachSurdenik.
Delete Image
Align Left
Align Center
Align Right
Align Left
Align Center
Delete Heading