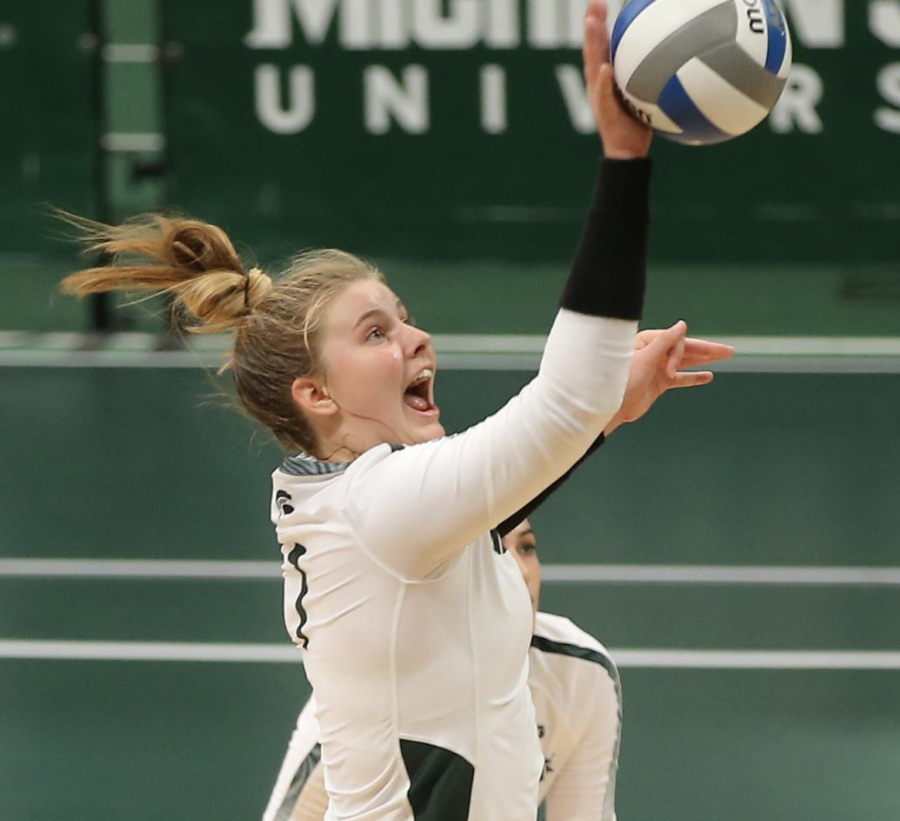 EAST LANSING — The Michigan State volleyball team entered the fourth set of Monday’s match against Ohio State on a roll. The Spartans had won two sets in a row, opening up a 2-1 match lead, and craving a win after failing to record a set victory in their first three games.

George felt her offense was too one-dimensional in Sunday’s match and relied too heavily on standout freshman outside hitter Sarah Franklin. Ohio State keyed in on Franklin in that match and held her to just seven kills. George made it her mission to find other options. She inserted junior Rebecka Poljan for Emma Monks at the second middle blocker spot, placed sophomore outside hitter Cecilee Max-Brown in the starting lineup instead of Molly Johnson, and put senior outside hitter Alyssa Chronowski in the rotation for the first time this season.

The results were fantastic for much of the match. Franklin and Max-Brown set career highs with 20 and 14 kills, respectively, while freshman setter Celia Cullen set a career high in assists with 41. Poljan was disruptive at the net, recording six kills and four blocks. Chronowski had only three kills, but came up clutch to secure victory in the third set. The team posted an overall hitting percentage of .338, its best performance of the year.

“I think we were able to get a little more offense out of different parts of the court,” George said. “Our offensive output was a little more diverse.”

Through the first three sets, the Spartans had answers for what plagued them defensively on Sunday. The rotations were clean and showed that the Spartans had done their homework against plays from Ohio State sophomore setter Mac Podraza and sophomore outside hitter Jenaisya Moore, who were kept in check.

“It was a great first-set win,” Franklin said.

The momentum turned for good at the start of the fourth set. Ohio State took the first six points and never looked back, hitting .400 on the back of three kills from Moore and six kills from freshman outside hitter Emily Londot, who had a career-high 23 for the match.

“It was a better match than yesterday, so that was a step up,” George said. “In [set] four, we came out a little bit flat. We were not as disciplined as we needed to be. We needed to get back to what was helping us out in the first three sets.”

Although the Spartans didn’t get the result they hoped for, George hopes to build on the performance in the next week of practice.

“We have a chance to work on some things before we get out to Maryland in another week and a half,” George said.

Michigan State will be back in action at Maryland on Feb. 12 and 13.