FINAL: Spartans struggle in second half, fall to Indiana 79-67 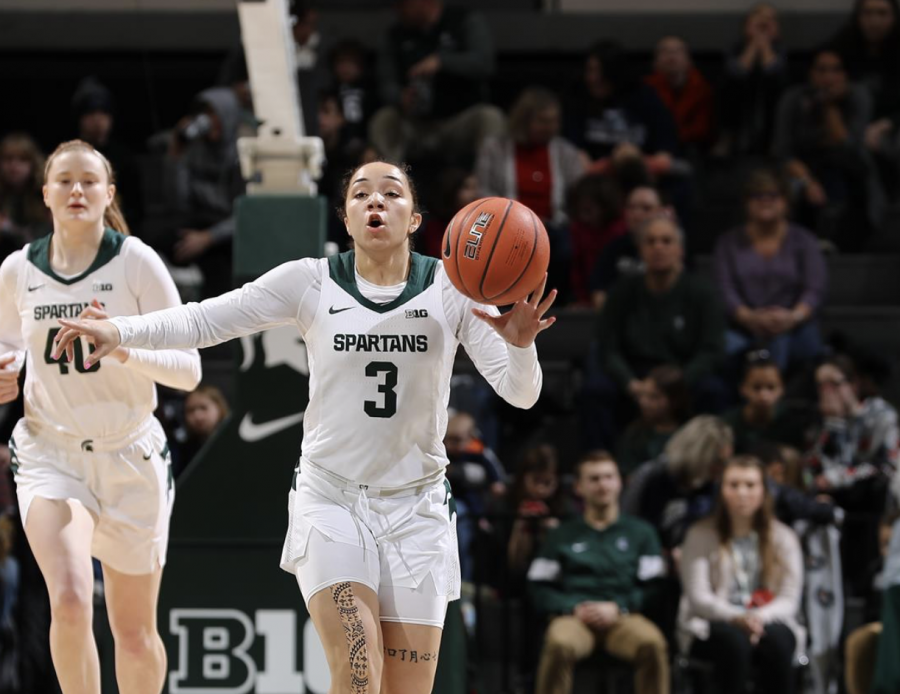 EAST LANSING — The Michigan State Spartans dropped to  9-4 on the season and 4-4 in Big Ten play with a 79-67 loss to No. 16 Indiana on the road Sunday. Nia Clouden led all scorers with 19 points and Alisia Smith added 17 points as well.

Indiana struggled for most of the first half, and the Spartans controlled the game until late in the third quarter when the Hoosiers came roaring back from an eight-point deficit to take a two-point lead going into the fourth quarter. MSU could not get things going in the fourth as the Hoosiers quickly extended the lead to nine. The Spartans were never able to recover, which allowed the Hoosiers to pick up the 12-point win.

In the end, the turnovers buried the Spartans, who finished the game with a negative assist-to-turnover ratio for the second game in a row. But more importantly than the number of turnovers (14), was the timing of them. The dagger for Indiana came when Alyza Winston turned it over, leading to a layup for the Hoosiers and allowing the deficit to reach nine. The Spartans were never able to get closer than seven after that for the rest of the game.

For the Spartans, the quick start to the game was a familiar sight, but was an element that had been missing over the recent stretch of games. MSU jumped out to a 16-6 lead early, but could not extend the lead past that. IU answered and the Spartans held a 19-17 lead after one quarter. MSU extended the lead before the half behind a strong second-quarter performance overall, and a scorching-hot start from Smith, who had 12 first-half points on 5-of-5 shooting. Nia Clouden also hit a couple of big shots to give the Spartans a 41-33 cushion heading into halftime.

The third quarter flipped the script when Grace Berger started to get going for IU. The Hoosiers’ leader had just one point in the first half, and finished with only nine, but she was able to turn the momentum of the game with a strong defensive presence and a relentless, fast-paced mentality while going straight to the basket in transition.

The Spartans will have a couple days to turn things around before they return to the Breslin Center for the first time in nearly a month, taking on Illinois on Thursday.