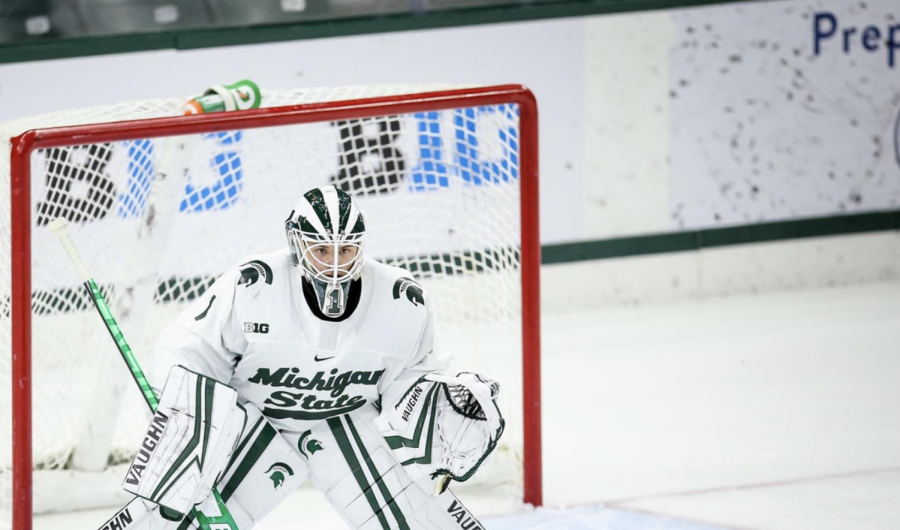 EAST LANSING— After the first series between Michigan State and Wisconsin was postponed earlier in the season due to COVID-19 issues within the Badgers’ program, the 6-8-2 Spartans traveled to LaBahn arena in Madison, Wisconsin, to take on the No. 13 Badgers.

It was a forgettable performance for the Spartans, who lost to the Badgers 6-0 while also allowing 50 total shots on net. Forwards Cole Caufield and Dylan Holloway each scored two goals apiece for Wisconsin.

The Spartans also went scoreless on two power play chances; on the season, MSU has only scored three power play goals in 45 chances.

With the loss, the Spartans dropped to 6-9-2 on the season and 5-9-1 in Big Ten play.  The Spartans also currently find themselves in last place within the conference.

The game started with a quick kneeing penalty on MSU forward Jagger Joshua 48 seconds into the game. Directly after, the Badgers’ leading point-getter, Cole Caufield, snapped a wrister past Drew DeRidder to open up the scoring on the power play.

From that moment on, the Badgers didn’t look back as they tallied two more goals from forward Brock Caufield, the older brother of Cole Caufield, and Holloway, respectively. As a result, the Spartans headed into the first intermission down 3-0.

The second period yielded a similar result for Wisconsin. The Spartans’ offense sputtered as the Badger defense swarmed them in their own zone; MSU only managed to get three shots on senior goalie Robbie Beydoun in the entire period.

Wisconsin was able to add another power-play goal as well as an even-strength goal in the second, courtesy of Cole Caufield and senior forward Ty Pelton-Byce.

The third period saw freshman goalie Pierce Charleson taking over for DeRidder after he let in five goals on 34 shots. This was the second career game for Charleson, who also relieved DeRidder in the Spartans’ 9-0 loss to No. 9 Michigan on Jan. 8.

The Badgers would add another Holloway goal in the third to put the game on ice; he had four points on the night.

Overall, the Badgers outshot the Spartans 50-19. Through 17 games, the Spartans have only scored more than two goals four times. As such, they only average 1.84 goals a game, the worst mark in the Big Ten and one of the worst marks in the country.

The Spartans will look to salvage a series split when they take on the Badgers on Saturday at 4 p.m.