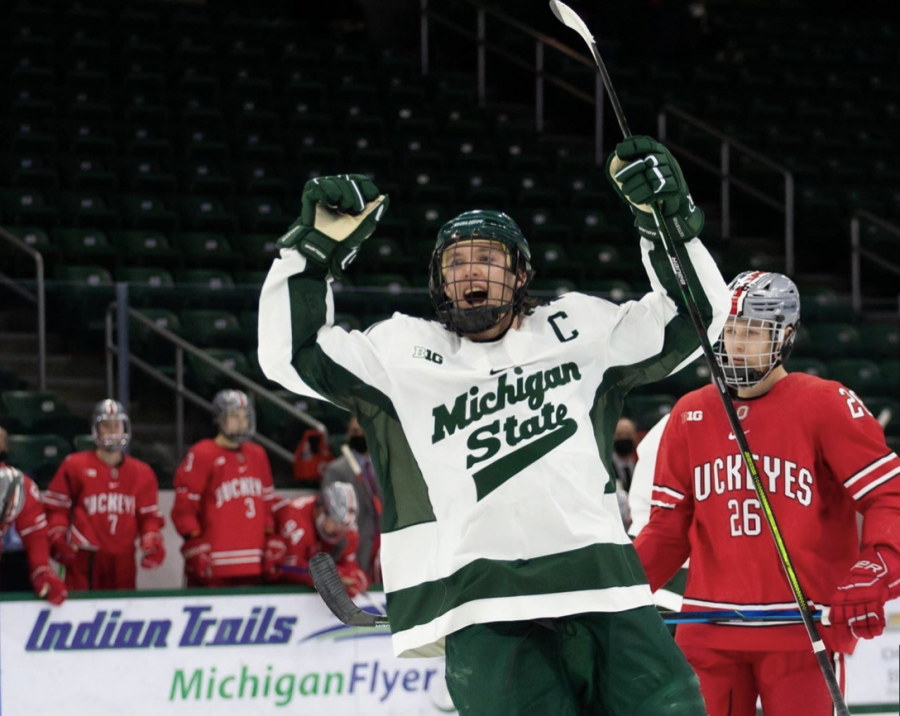 What transpired in the two-game series between both teams showed the Big Ten what both teams were (and were not) capable of doing on the ice as the Buckeyes and Spartans both took one game apiece. Here are Three B1G Things from the Spartans back-to-back matinee tilts against the Buckeyes from Columbus.
“Shots, maybe? Sure, we have those in stock.”
A hockey stick can come in many different flexes and curves. Some are wooden while most are carbon fiber. Either way, the hockey stick has one sole purpose: to shoot a six ounce piece of vulcanized rubber toward a goal, or in simple terms, to shoot a puck on net.

The Spartans, however, have not seemed to get that memo in recent months. In fact, after starting out the season with three consecutive games when they outshot their opponent, the Spartans have not outshot a team in 10 consecutive games (a span of just under two months). The last time the Spartans outshot an opponent was Nov. 29 against the Buckeyes in Columbus, Ohio.

Through the first four games, the Spartans went 2-1-1. That is what you would expect from a team who put up more than 35 shots per game and outshot their opponent in each game. Throughout the next month and a half of play, the Spartans would eclipse the 30 shots on goal mark once and get outshot in 10 straight games going 3-6-1.

In game one last weekend, the Spartans would once again fail to eclipse 30 shots on goal and gave up a season-high 56 shots. Not only were the Spartans not getting any consistent offensive pressure to slow the barrage of shots coming at Drew DeRidder, but they also let the Buckeyes fire at will. The Buckeyes had more shots in the second period (25) than the Spartans did in the entire game (22).

That is a recipe for disaster, and it proved costly, as the Spartans fell in game one 5-1, marking the 11th game in a row they had been outshot and the fifth time the Spartans had given up more than 40 shots on goal.

Game two, however, would be different. Seriously.

The Spartans looked like a completely different team in game two than the day prior, and it showed on the stat sheet.

That is a recipe for winning games, as the Spartans took game two 2-0.
“Hmm. Cinnamon? No. Nutmeg? No. A ha, faceoffs.”
Speaking of recipes, you’re going to need a couple more ingredients to actually make something appetizing.

What seemed to be the secret ingredient for some of the Spartans’ success in the first half of the season was their prowess on the faceoff dot.

Heading into the weekend, the Spartans ranked ninth nationally in faceoff percentage with a 54% win rate, but everything is not as it seems. The Spartans had lost the faceoff battle in each of their last four games and had gone 1-2-1 in that span.

Still, the Spartans had three players in the top 10 of the Big Ten in faceoff percentage entering the weekend. Kristoff Papp leads the Big Ten, but has since seen his faceoff duties removed as he has made the transition to the wing position.

Tommy Apap was fifth at a 57% win rate and Josh Nodler was sixth at 57% as well. Nodler has been the biggest surprise for the Spartans on the faceoff dots, as he has bettered last season’s faceoff win total in a little over half a season.

In game one, the Spartans were cold on the faceoff dot and won 23 out of 55 draws, winning only 41% of their draws. Apap won seven of his 20 draws and Nodler was the only Spartan near breaking even, winning seven of his 15 draws.

The Spartans inability to win faceoffs not only hindered their ability to gain important offensive zone time, but it also directly led to the Spartans conceding goals on their end.

Michigan State was able to turn the tide in game two and completely own the faceoff circle, winning 35 out 53 draws. Leading the charge was Apap, whose 13 wins on 19 draws led all players. Mitchell Mattson padded the Spartans faceoff stats by winning seven of his nine faceoffs as well.

The Spartans have identical records when winning or losing the faceoff battle at 3-4-1. However, the Spartans identity relies on them winning faceoffs and controlling the pace of play. For a team that lost most of its big guns last year to graduation, controlling play, especially late in games, rests on their ability to win faceoffs.
Jokes aside, it’s time to get serious
After the Spartans split against Ohio State, there are now 10 conference games left for Michigan State. As it stands right now, seven points separate Michigan State from third in the Big Ten. The Spartans have yet to show that they can “hang with the big boys” and will have some time to try in the next coming weeks.

Third place is the sweet spot for the Spartans. They would be able to host a playoff game and would most likely not have to play Minnesota, given they win their opening round matchup and Minnesota wins the Big Ten regular season title.

Is it plausible? Well, yes. Is it realistic? I don’t know.

Michigan State’s final 10 conference matchups include eight games against the top three teams in the Big Ten. Those three teams (Minnesota, Michigan, and Wisconsin) all rank in the top 10 in the nation in scoring. Just last week, Minnesota put up 20 goals in a two-game series against Arizona State.

Michigan State is tied for 29th in that nation in scoring. Only one team is worse than the Spartans and has played the same number of games: Colorado College. The Spartans scoring woes will have to change if they want to run the table and make a push toward hosting a playoff series.

The Spartans went scoreless on their four opportunities against the Buckeyes and have scored just one power play goal in their last 12 games. If the Spartans have any chance against the top teams in the Big Ten, they will need to take advantage of every opportunity they have, including scoring on the power play.