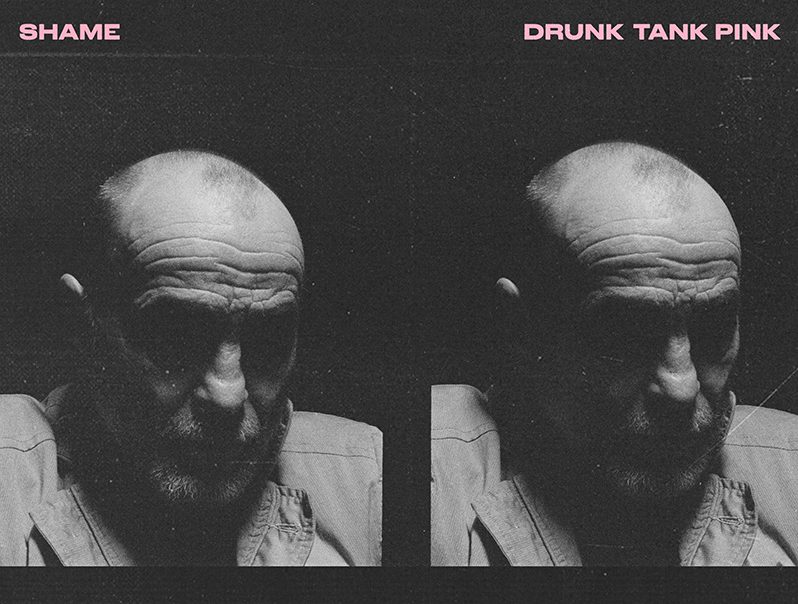 Over the past few years, punk music has seen an incredible blossom  from a distinct sound into a homunculus of styles and genres. Bands such as Parquet Courts dazzled the music scene in 2019 with their dynamic and poignant record, Wide Awake!. The instant mosh pit diet that was packaged and sold by Dogleg culminated in the voracious feast that was 2020’s Melee, a pax romana of garage DIY and basement punk.

Looking back at Joy Division’s powerfully derelict and frigid Unknown Pleasures, the band shame seems to channel that very same feeling on the newly released Drunk Tank Pink. The group relishes in the progression of punk and its analogous works to create something equally continuous, influenced by groups such as Slint, Public Image Ltd., and Nomeansno. The culmination of these various textures of punk unabashedly and triumphantly appear on “Nigel Hitter.”

The basement yawp echoing from the drums ground the high-strung melody in its low sinking clang. Below the steps is a dimly lit troupe, strumming with the metronome of a swinging lightbulb. As the bellowed punch of the percussion reverberates off the walls, the honey-slathered guitar chords counter the typewritten clarity of the drums, with the hazy screech of each strum. Despite the pipe-bomb temperament that is being displayed, the inflection almost seems to be its antithesis, with the audible smile in the chorus refrain, “It just goes on.” The invincible delivery is as self-righteous as it is infuriated.

The drone of the chords at the hook becomes borderline hypnagogic, with the wail of the guitar ribboning the background with its velvety cry.

The hook becomes a magazine loaded into a dynamic submachine gun, riddling your eardrums with a cascade of bullets.

As the casings fall to the ground, you realize that you are unharmed, but this furious assault is ongoing. It’s as if Confusion Is Sex has somehow reached into the future to pull groove-laden and chord-heavy instrumentation to compliment its eerie dissonance.

Past the break of the hook, vocalist Charlie Steen’s singing becomes more neurotic and unyielding as he proclaims:

“I’m burning on both ends naturally/

“It just goes round and round!”

Progressing into a howl as his sanity falls out of his mouth, lyric after lyric:

Steen’s straining as this puppeteering apparition leaves his body—and the track comes to a halting crash, but paradoxically into both a driveway and a brick wall.

In the span of about three minutes, shame has channeled the bootlegged cassette tape punk of a battle jacket clad outcast. Post hardcore, punk, post punk and even noise gleefully show their influence into a compelling, vapid and dynamic showcase for the 21st century. As they weave through the alleyways and suburbs of a disillusioned mind, chain smoking cigarettes to stay sane, one thing is clear—I haven’t a clue where they’re headed, I just know that we better be there when they arrive.