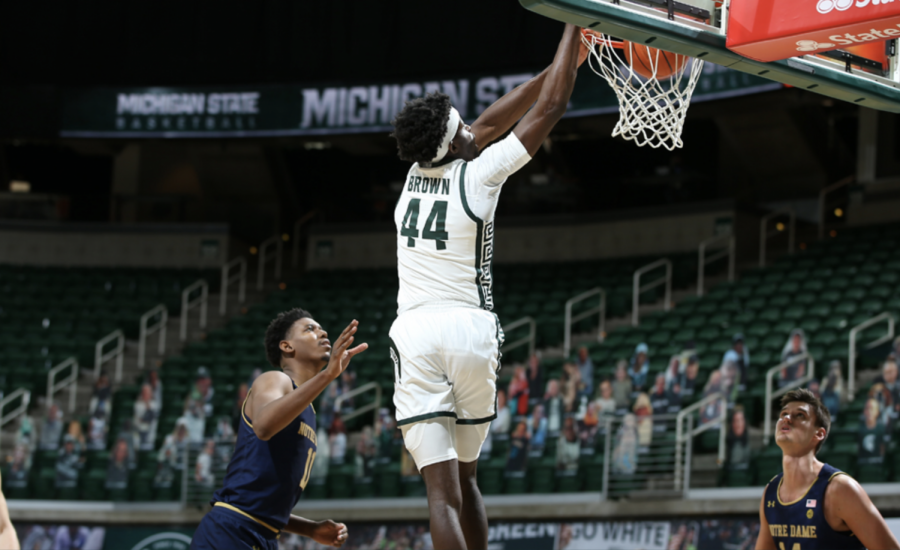 Brown, a junior, has been a mainstay in the rotation for Izzo. He is averaging 7.5 points per game in 17.8 minutes.  He is also shooting 46.2% from 3-point range, the best percentage on the team.

As a result of the positive test, Brown is currently in the 17-day Big Ten COVID-19 protocol. As such, he will not be available for the Spartans until early February.  Izzo said that senior guard Joshua Langford could make his return against Rutgers, however, with Brown and Langford possibly out, Rocket Watts and Foster Loyer should see extended time in the backcourt.

The Spartans have had their last three contests postponed; they have also gone without full team practice for over two weeks because of the sheer number of positive COVID-19 tests. MSU did return to full team practice on Monday in preparation for Thursday’s game.

Since the Spartan players returned to campus in late August and early September, 13 of the 15 total players have tested positive for COVID-19.

Izzo said that Thursday’s game against Rutgers is still scheduled to be played; he also stated that the Spartans should have 11 or 12 players available. This will be the first game for the Spartans since Jan. 8, where they lost to Purdue 55-54 on a last-second Trevion Williams floater to Purdue.

The Scarlet Knights, meanwhile, have lost five out of their last six games, including a blowout 68-45 loss to MSU on Jan. 5. As a result, they are now ninth in the Big Ten with a 4-6 conference record.

Tipoff for Thursday’s road game is currently set for 7 p.m.