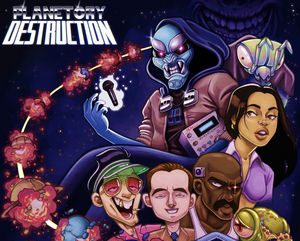 I met this cat @docdmusic 3 years ago in Chicago. Now he claims to be from the year 2097 so he must have borrowed doc brown’s Delorean lol. However on that day he handed me a flash drive with music like many before him. pic.twitter.com/52sEYVwpes

The album release was announced by Logic himself on his Twitter and premiered on his Twitch stream on his birthday, Jan. 22. While the true identity of Doc D is unknown, many longtime Logic fans speculate that Doc D is Logic.

Doc D’s Planetory Destruction is a 17-track album that tells the story of Doc D as an intergalactic space criminal who destroys planets. The album is set in the year 2097 and is told from the perspective of intergalactic radio host characters DJ Buck Naked and Kyle in numerous skits. The dialogue between DJ Buck Naked and Kyle on the second track, “Planetory Destruction” reveals the setting of this album and introduces the Doc D.

“The phones are lighting up here at Cosmos Radio, along with the entire universe/

You are turned in with the greatest hosts in the galaxy/

Well, it seems Doctor Destruction is on yet another planetory rampage/

And this maniac just won’t stop terrorizing the galaxy/

I couldn’t agree more, but you know what?

Let’s at least give the people a soundtrack to their inevitable destruction.”

In the track “Planetory Destruction,” produced by Logic, Doc D raps effortlessly on a 90s style boom bap track. Doc D flows on this track while flexing a cutthroat persona, giving the sense that Doc D is someone not to be messed with, otherwise he’ll destroy you.

The track also features a verse from a longtime friend of Logic, Big Lenbo, in which the same cutthroat flow and vibes are delivered, introducing Doc D as the infamous criminal in this story.

While many believe that Doc D is Logic’s secret alter ego, Doc D has a deeper voice than Logic and gives a different vibe than we are accustomed to hearing from Logic. He has been seen in videos on social media interacting with a person in a mask, giving the portrayal that Doc D is not him. Logic also recently announced his retirement from music on July 24th, 2020, so there is a possibility that Doc D may not actually be Logic. However, there is evidence suggesting otherwise.

It is believed by fans that Logic is rapping as Doc D, but uses a device to change the tone of his voice.  Although there are these videos of Logic interacting with “Doc D,” Logic fans have discovered that Doc D’s Instagram page used to be Logic’s account for his dog, Stoney. Logic also produced many of the tracks on this album. Some speculate that the reason that he came up with the Doc D alter ego to secretly release music without having to be under the microscope of critics. “Dark Place,” the eleventh track on Logic’s album No Pressure, alludes to his struggles with rapping as he rose to fame and supports this reasoning:

“I remember makin’ music alone, just a pen and a microphone/

But nowadays it’s hard to get in the zone/

Writin’ rhymes was easy before the fame/

Rap used to fill me with joy, now it’s nothin’ but pain/

I’m stuck in the game, tryna get back from where I came/

I write this letter for the person who’s listenin’/

Fed up and tired of people dismissin’ ’em, I’m with you/

Only through maturity can we overcome/

Despite all of the speculation over who Doc D is, the point of this album is to take the listener through the story of an intergalactic space criminal who is on a rampage of destruction filled with 90s boom bap rap vibes. Doctor Destruction provides us with a personal album as he follows his mission of destroying the multiverse. This album is more like a movie, and if you want to know more about the story of Doc D, listen to his debut album, “Planetory Destruction.”