Spartans complete comeback to earn split against No. 9 Michigan 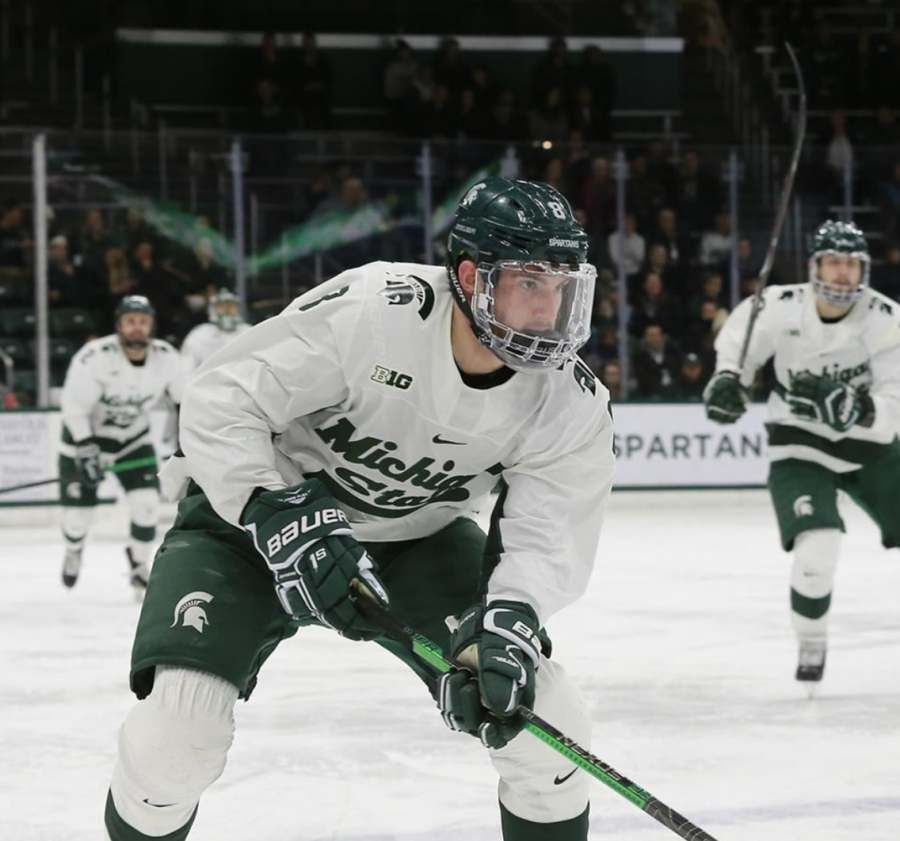 EAST LANSING –No. 9 Michigan traveled to East Lansing to take on Michigan State to finish off a weekend series after it won game one 9-0 in Ann Arbor. However, thanks to a late scoring burst, the Spartans earned the split in game two with a 3-2 comeback victory.

“We were disappointed last night, that’s a tough one to handle and a pretty bad taste in your mouth,” head coach Danton Cole said. “You know what, sports are an interesting thing and it’s how you respond to things and I always think that’s the important thing.”

“Tonight we just battled harder,” Cole Krygier said, when talking about the difference between games one and two. “We finished hits more, we shot the puck a lot more…winning faceoffs was huge for us too, it evened out the game.”

Just 54 seconds after the puck dropped on game two, forward Charlie Combs got MSU on the board with an uncontested shot from the hash marks that went over Michigan goaltender Strauss Mann’s glove.

A few minutes later, the Spartans were having issues clearing the puck out of their own zone, and Wolverine sophomore forward Eric Ciccolini caused a turnover and passed it out front to Johnny Beecher to tie the game at one; the score would remain 1-1 at the end of the first period.

Michigan began the second period shorthanded when sophomore defenseman Keaton Pehrson made contact with the head on a hit late in the first period. The hit was reviewed and Pehrson was given a 5-minute major penalty and a game misconduct that put the Wolverines down a man for the rest of the game.

However, MSU did not make the Wolverines pay on the long power play. The Spartans’ power play unit has not been generating much of anything this season. Coming into Saturday’s game, Michigan State was converting only 10% of their penalties (3-for-30),  which is the ninth-worst mark in the country.

The rest of the second period was a goalie showcase. Drew DeRidder and Mann both saw numerous quality chances but turned every single shot aside in the second. They combined for 20 saves and the shot chart showed that nearly every single shot that period came from below the top of the circle and in between the faceoff dots.

The third period started just as even as the second period, but the ending was nothing but exhilarating. With just under five minutes left in regulation, Michigan defenseman Cam York tried a wraparound shot that ended up on the stick of forward Brendan Brisson, and as a result, the Wolverines took the 2-1 lead.

The Michigan lead wouldn’t last for long. Spartan defenseman Cole Krygier tied the game up at two with 2:01 left in the period with a shot from the top of the circle that went blocker high on Mann, but the Spartans didn’t stop there.

With just 37 seconds remaining on the clock, defenseman Christian Krygier delivered a pass to Josh Nodler, who put a one-timer under the arm of Strauss Mann to make it 3-2 MSU. This was Nodler’s first goal of the season.

“For Nods [Nodler] he’s been doing a lot of good stuff,” head coach Danton Cole said. “He’s one of those guys who works too hard…but what a feeling on the bench, and real happy for Josh.

Michigan State’s best player was DeRidder. Michigan got 40 shots on net in game two and DeRidder turned away 38 of them, including some prime scoring chances from some of the Wolverines’ top scorers.

“We were disappointed last night, that’s a tough one to handle and a pretty bad taste in your mouth,” Cole said. “You know what, sports are an interesting thing and it’s how you respond to things and I always think that’s the important thing.”