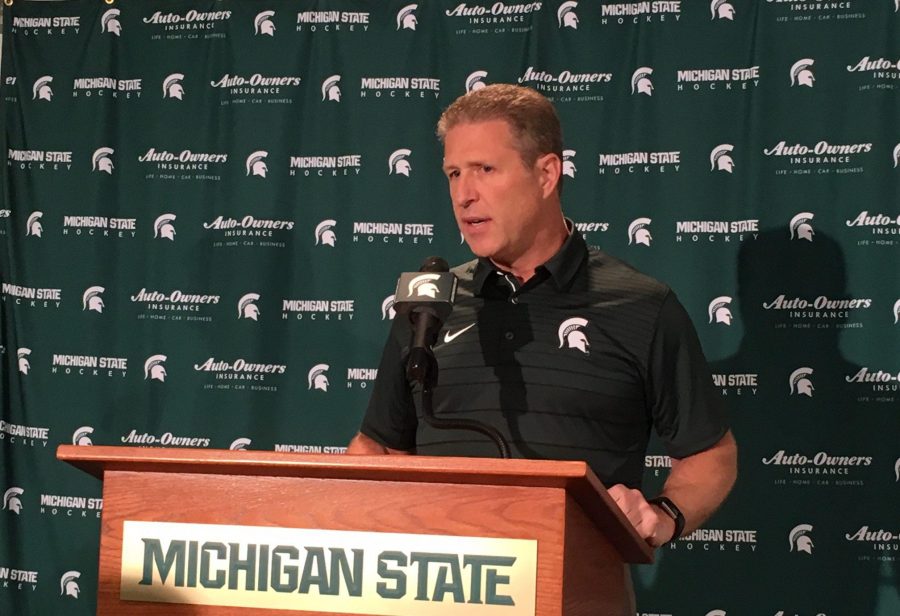 EAST LANSING— After splitting their previous series with Penn State, Michigan State got hammered by No. 9 Michigan 9-0. With the loss, the Spartans dropped to 4-5-1 on the season and 3-5-1 within Big Ten play. Here are a few reasons why MSU struggled so badly tonight:

The Spartans have to improve on special teams going forward. They are currently 3-for-30 on power play chances on the season, which is tied for 43rd in the nation. Furthermore, one of those three power play goals came on the back end of a five-minute game misconduct penalty against Penn State.

The Spartans’ power play has looked sloppy all season, and at times, they are seemingly incapable of controlling the puck in the offensive zone when having the man advantage. MSU went 0-for-2 in power-play chances against Michigan, while also committing five penalties. Unlike the Spartans, the Wolverines scored twice on the man advantage.

Additionally, MSU is getting called for penalties more often this year than in years past under Danton Cole. The Spartans currently sit at over 13 penalty minutes per game, which is good for 10th in the nation. In a stacked Big Ten where nearly every team has over a 25% success rate on the power play, MSU simply cannot afford to continue to commit these self-inflicted wounds.

2. Goatender Pierce Charleson gets his first action in net.

After reigning Big Ten First Star of the Week Drew DeRidder got pulled after conceding three goals in the first period, freshman Pierce Charleson made some flashy saves against the relentless Michigan offensive attack. Despite letting in six goals on 35 shots, Charleson made some flashy saves as the MSU defense let up countless amounts of odd man rushes. There were a couple shots that trickled past Charleson’s pads, but for his first action against a stout Michigan club, he seemed relatively poised and composed.

3. Michigan is looking like the team that everybody expected to see this year.

After a 4-0 start to the season, Michigan hit a rough patch courtesy of losing five of its next six games, and as a result, the Wolverines entered the holiday break at 5-5 and tied for fifth in the Big Ten.

We’ve seen Mel Pearson coached teams catch fire in the second half of the season, and tonight’s performance might be a signal of things to come. With freshman sensations like Kent Johnson, Owen Power and Matty Beniers orchestrating the offense and veteran leadership from goaltender Strauss Mann, Nick Blankenburg and Cam York, Michigan has all the tools necessary to make a run for the Frozen Four, especially considering that Johnson, Power and Beniers may very well end up playing at the next level sooner rather than later.