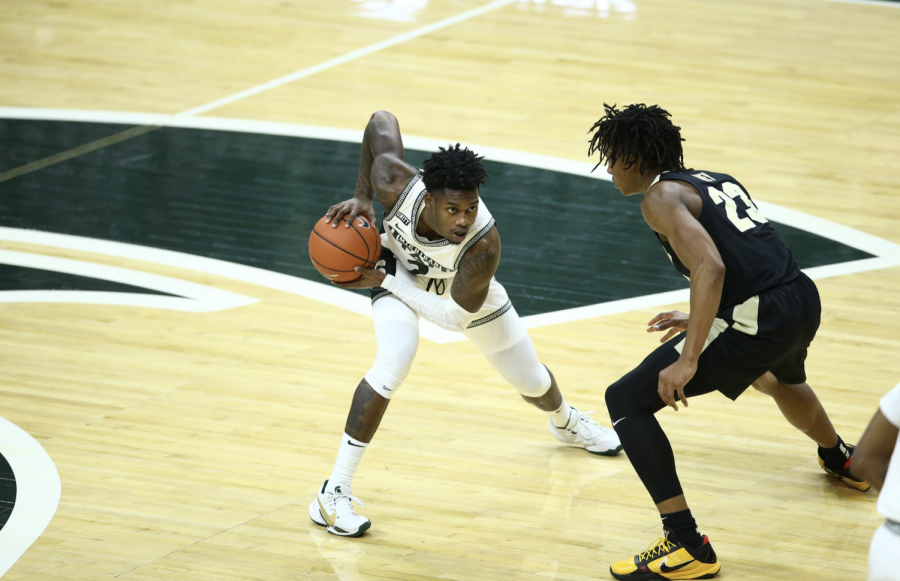 EAST LANSING — After building a 15-point lead at halftime, Michigan State shot only 22% from the field in the second half en route to a collapse at the hands of the Purdue Boilermakers, and an eventual loss, 55-54.

Purdue star Trevion Williams scored 24 of his 26 points in the second half, including a game-winning layup with 4.5 seconds remaining in the game, to finish off a blistering comeback for the Boilermakers.

After Williams’ clutch basket, Henry quickly ran down the floor for the Spartans, but his layup was missed off the backboard as the final buzzer sounded. Michigan State head coach Tom Izzo had one timeout remaining, but opted not to use it.

“You have to give a lot of credit to Trevion Williams,” Izzo said. “Love the kid, he plays hard. He was the difference in the game.”

After leading 31-16 at halftime, the Spartans endured a field goal drought of over 11 minutes in the second half that helped Purdue chip away at the lead. The Boilermakers tied the game at 43 points with six minutes remaining in the game, eventually moving on to victory.

“It was one of the more disappointing losses that we have had,” Izzo said. “Give Purdue credit. Our defense was phenomenal, we didn’t rebound it very well. We didn’t deserve to win, they deserved to win, they made winning plays.”

After posting a defensive performance Izzo called one of the team’s best in “years” against Rutgers, the Spartans sustained their momentum in the first half against Purdue, forcing eight turnovers and only allowing six field goals in the first half.

It was a back-and-forth battle early until Michigan State put together a 13-0 run to take a 20-8 lead with 5:39 remaining in the half. Purdue would counter with two baskets from freshman Jaden Ivey, but the Spartans responded with a 9-0 run to take a 31-16 lead at halftime.

Marcus Bingham Jr. blocked three Purdue shots in the first half, including one right at the halftime buzzer, to give his team an added boost of energy headed to the locker room.

Purdue’s leading scorer on the season, Williams, was held in check in the first half thanks in part to lingering foul trouble. Williams, who averages over 14 points per game, only scored two points while tallying two fouls.

The Boilermakers opened the second half on an 8-0 run, but a technical foul on Purdue’s Zach Edey led to a made free throw by Joshua Langford and a dunk from Julius Marble II to stop the bleeding for the Spartans. Michigan State would lead 36-24 at the under-16 media timeout.

Michigan State’s sluggish second-half play would then resurface. The Spartans were only able to manage two made field goals over the first eight minutes of the half while committing seven early fouls and six turnovers to lead by just five, 38-33, with 11:53 remaining in the second half.

Purdue would continue to creep closer, and by the 7:17 mark of the second half, the Boilermakers only trailed by three. A field goal drought of over eight minutes for Michigan State, and 12 early second-half points for Purdue’s Williams, resulted in a narrow 41-38 Spartan lead.

After two free throw makes from Henry, a Brandon Newman basket for Purdue would tie the game at 43 points with just over six minutes remaining in the half.

Michigan State’s field goal drought would continue until it stretched over 11 minutes, but a Joey Hauser 3-pointer with 3:43 remaining in the game finally ended the Spartans’ cold-shooting. However, the game remained close, as a basket from Williams made the score 48-45, with Michigan State still out in front.

“I thought their defense was part of it, but we made some foolish turnovers,” Izzo said on his team’s offensive slump. “I have to watch the film. I thought we made a couple of bad shots. Their defense makes you out of control.”

The two teams would continue to go back-and-forth, with two free throws from Williams reducing the Spartans’ lead to just one, 51-50, with just over a minute remaining in the contest.

A tough floater at the end of the shot clock from Henry would then expand Michigan State’s lead to 53-50 with one minute remaining. Henry would then intercept a pass from Eric Hunter Jr. on the other end and make one free throw to expand the lead to four.

Hunter Jr. was then fouled on a drive to the basket of his own, making two free throws to cut the Spartans’ lead to 54-52. On the resulting inbound play, Malik Hall’s pass was mishandled by Watts on the baseline and turned over to the Boilermakers with 11 seconds to go in the game.

Watts appeared to be pushed out of bounds on the play, but no foul was called and a replay review confirmed the ball went off of Michigan State.

“I didn’t like the call at all,” Izzo said on the play that resulted in a turnover.

Purdue inbounded the ball to Williams, who was fouled by Henry, sending him to the free-throw line, where he made one of two attempts to make the score 54-53. The rebound on the second attempt was fought for by both teams and retained by the Boilermakers on a held ball with six seconds remaining.

After Purdue head coach Matt Painter called a timeout, the ball was again inbounded to Williams, who nailed a clutch layup to give Purdue a 55-54 lead.

“They made the big plays at the end,” Izzo said.

Henry quickly rushed down the floor for Michigan State, but his layup attempt was missed off the backboard, and Purdue was able to complete a second-half comeback and monumental upset on the road in East Lansing.

Izzo had one timeout remaining but opted not to use it in the waning seconds of the game, as Henry’s layup was missed at the buzzer.

“We defended well. Give credit to Purdue, they fought until the end,” Langford said. “In this conference, you have to fight for a full 40 minutes. But the loss does hurt, especially losing like that.”

“You’ll never know how hard it is to lose that game when the effort was there,” Izzo said.

Up next for Michigan State is a road test against the No. 5 Iowa Hawkeyes on Thursday. Tipoff is set for 9 p.m.