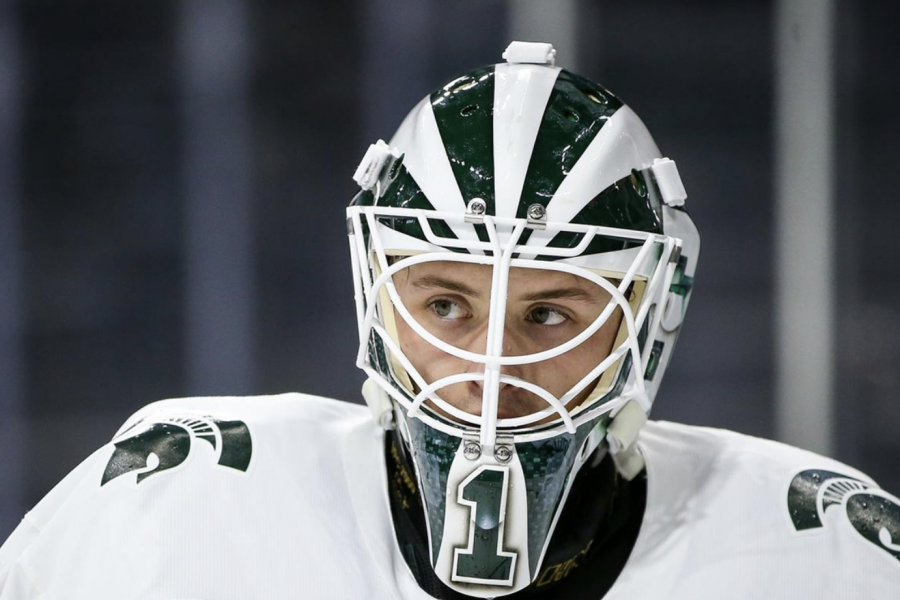 EAST LANSING – The Michigan State Spartans began the second phase of their Big Ten hockey season by welcoming the Penn State Nittany Lions to Munn Ice Arena on Jan. 3 and 4.

The Spartans (3-3-2 overall, 2-3-1 Big Ten) were looking to gain a valuable six points against bottom of the table Penn State (3-5, 1-5), which began the season dropping its first five games and had since been on a three-game winning streak after a surprise 9-5 victory against Michigan.

The Spartans and the Nittany Lions split their first series against each other with Penn State taking game one 1-0 behind a shutout from goaltender Oskar Autio, and Michigan State securing game two 5-1 with a two-goal outing from forward Jagger Joshua. Here are Three B1G Things from the Spartans year-opening showdown against the Nittany Lions:
Drew DeRidder. That’s it.
Drew DeRidder has been the Spartans’ saving grace the entire season and this week was no different.

The junior netminder was once again up to the task of keeping a high-powered offense at bay, stopping 64-of-66 Penn State shots in the series. In fact, Michigan State’s 2.25 goals allowed per game heading into this series put them 12th nationally and second in the Big Ten, thanks to DeRidder’s heroics.

DeRidder was able to quell a Penn State team that had not been limited to two or less goals in a two-game series in almost three years. He posted a 97% save percentage against the Nittany Lions.

This season, DeRidder’s save percentage is .946, which puts him tied for ninth in the nation and one of three Big Ten goalies ranked in the top 25 (1-Lafontaine (MINN), 24-Nappier (OSU)).

DeRidder has had to play great the past couple of weeks, as he had to face 93 shots against the Fighting Irish, including a 47-save performance in a 1-1 tie in game one. This past weekend, he got a little bit of a break in game one facing 29 shots, but had to play lights out in game two stopping all but one of Penn State’s 37 shots on goal.

The Spartans defense did a good job at stopping Penn State, which ranked first in the Big Ten in shots on goal per game this season with 41, from generating opportunities in the Spartan zone. The Spartans blocked 10 Penn State shots in game one and 14 in game two, lessening the load for their star goaltender.

For his performance against Penn State, DeRidder earned the Big Ten’s first star of the week for the second week in a row. DeRidder’s recent performances have given the Spartans reliability between the pipes and can prove to be a valuable asset for a Spartan team that does not score often.
Do you believe in… scoring?
After being held to two or fewer goals in a game in four out of their past six outings, the Spartans may have finally gotten rid of their scoring woes. In their past two series, the Spartans were able to score four times in an overtime win against Notre Dame and put up five against Penn State in the backend of this past weekend’s series.

Leading the Spartans five-goal charge against Penn State was Jagger Joshua. The sophomore forward equaled his goal total from last season and helped secure the Spartans game-two victory with a power play goal in the second period to make it 3-1 MSU.

The Spartan victory was also the first time MSU had scored five goals in a game this season, and the first time the Spartans had reached that feat since they beat Ferris State 5-2 in the Great Lakes Invitational in Dec. 2019.

Cesana’s primary assist on Gianluca Esteves’ first goal of the season, which proved to be the eventual game winner, provided the Spartans with a 2-0 advantage just over five minutes into game two. Cesana would also add another assist on a Lewandowski empty net goal with two minutes remaining in the third.

In another surprise to the Spartans, freshman forward Kristoff Papp, who was reinserted into the lineup after being scratched in the Spartans 4-3 overtime victory against Notre Dame, notched two assists against Penn State.

Papp, who had been a healthy scratch in two out of the last four Spartan matchups, was given a chance to watch his team from the stands and see what he needed to do in order to get back in the lineup. Along with being scratched, Danton Cole had decided to try Papp out on the wing position and slotted him at left wing alongside Tommy Apap and Brody Stevens.

The change meant different opportunities for Papp, who made the most out of it and resulted in two assists, both coming on Joshua goals. Papp joins Kyle Haskins as the only freshmen on the team to tally more than two points this season. In total, freshmen have accounted for 10 of Michigan State’s 61 points this year.
Trends: the good, the bad and the downright unfathomable
To make the metaphorical pill much easier to swallow, let’s take a gander at one of the good trends for the Spartans: penalty kill.

Over the last two series, the Spartans have only allowed one power play goal, which came against Penn State on a Jake Smith hooking Penalty. The Spartans successfully killed off all eight penalties committed against Notre Dame and only gave the Nittany Lions three power play opportunities.

The Spartans’ game one loss against Penn State marked the first time they had not committed a penalty in a game since February 2007.

The Spartans haven’t been taking many penalties, but they’ve taken some costly ones. Michigan State has had to kill off three major penalties in their last four games due to misconducts given to Cole and Chrisitan Krygier for illegal checks from behind against Notre Dame and Charlie Combs for head contact against Penn State.

Now time to get into some of the more “recently want to be forgotten” statistics: faceoffs.

Michigan State started out the season formidable in the faceoff dots and had started the season by winning almost 62% of their draws. Recently, the Spartans have lost a little bit of their mojo on the dots, including losing the faceoff battle both nights against Notre Dame.

The Notre Dame series marked the first time the Spartans got outdueled in the faceoff circle this season.

Against Penn State the Spartans were able to bounce back, but they weren’t very convincing the entire weekend. Michigan State looked great in game one against the Nittany Lions winning 34 out of 53 draws, but game two was much closer with the spartans taking a 30-27 edge.

The Spartans recent faceoff struggles have resulted in them dropping from leaders in the nation to third. However, the Spartans are still winning over 57% of their faceoffs, which is great, but they haven’t gotten those much needed faceoff wins when they need them most: on the power play and in the defensive zone.

This brings me to my last point and the downright unfathomable statistic: shots.

The Spartans began the year outshooting their opponents in four straight games including three straight games with over 40 shots. During that span, Michigan State went 2-1-1 and had pinned teams in their defensive zones and generated valuable offensive zone time.