Izzo reflects on events at Capitol, encouraged by Spartans’ energy ahead of Purdue matchup 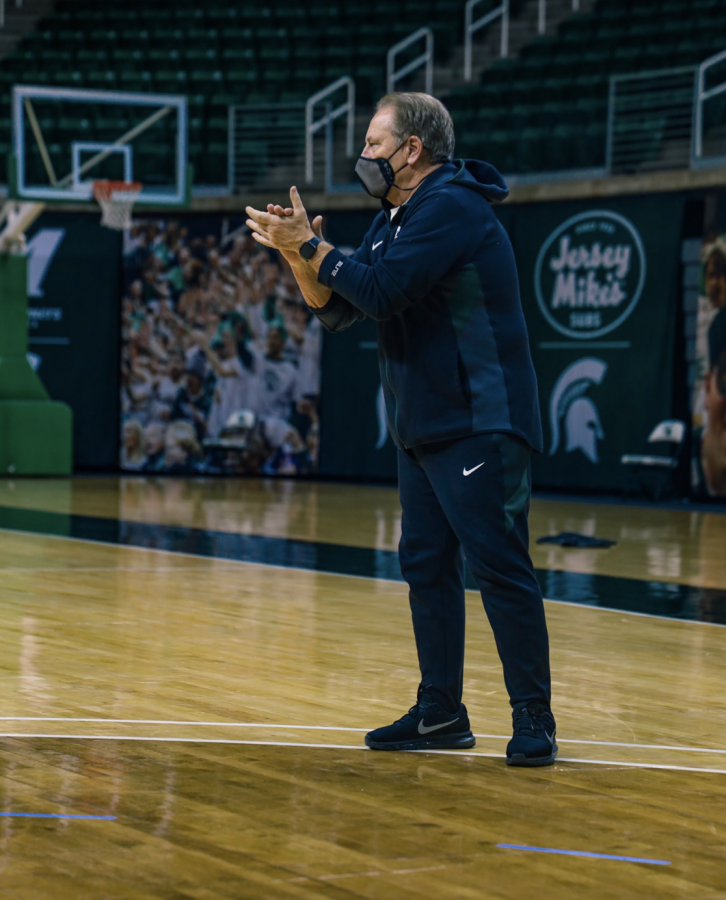 Tom Izzo cheers his team on as they practice in preparation for Oakland/ Photo Credit: MSU Athletic Communications

EAST LANSING — There are some days when it does seem trivial to focus on sports. The past few days both fit that bill. Michigan State men’s basketball coach Tom Izzo spoke Thursday about what happened Wednesday at the nation’s Capitol.

“I didn’t watch a lot of it because the little bit I watched made me sick,” Izzo said. “It was a disgrace to all of us. In all honesty, nothing like that can be tolerated.”

Leading the Spartans isn’t a responsibility that Izzo holds alone when it comes to situations like this. Josh Langford, a sixth-year player, has some of that responsibility on his shoulders as well.

“It’s difficult because at the end of the day, we are American citizens,” Langford said. “It is disheartening to see.”

Izzo finished his statement on the issue talking about equality.

“It makes me want to fight even harder for this equality we all need,” Izzo said. “We have to quit getting to this destructive way.”

On the trivial topic of college basketball, Izzo was pleased with his squad’s defensive effort against Rutgers, as the Spartans routed the Scarlet Knights 68-45 on Tuesday.

“We played some of our best defense this past game,” Izzo said. “I was very pleased with our energy and our attention to detail.”

Izzo also mentioned that every win in the Big Ten is a big one because of the strength and depth of the conference.

Aaron Henry was lauded by Izzo for his performance against Rutgers.

“Aaron, in one phase, is playing his best basketball ever,” Izzo said. “The way he played the other night… was kind of reminiscent of Gary Harris and guys like that who are getting it done.”

Izzo will be hoping for some more impressive outings from his players as the Spartans host Purdue on Friday. The Boilermakers come into East Lansing with a 7-5 record. It will be their third-straight road game after their home matchup with Nebraska scheduled for Tuesday was postponed.

The Spartans will be eager to get the bad taste out of their mouths with regard to Purdue, after the 71-42 dismantling of the Spartans in West Lafayette last season. Purdue has won four of the last six meetings between these two squads.

Much of the Boilermaker threat rides on the shoulders of Trevion Williams, a Detroit native who was recruited by MSU, but ultimately chose to play at Purdue.

“He’s a double-double machine,” Izzo said. “He’s just becoming a great player in this league, not a good player. A great player.”

He averages 14 points and just under 10 boards per game, but Williams’ threat isn’t limited to scoring and rebounding.

“He is the best passing big man I have seen in this league in a long time,” Izzo said.

Williams gets help from a backcourt featuring Sasha Stefanovic and Eric Hunter Jr. that averages about 22 points per game. Stefanovic is shooting over 50% from 3-point land this season.

Tip-off is set for 7 p.m. on Friday. You can listen to the action beginning at 6:45 p.m. with the Impact Izzone pregame show on Impact 89FM or on the Impact Radio app.