FINAL: Clouden’s career-high 32 not enough as Spartans fall to Terrapins 93-87 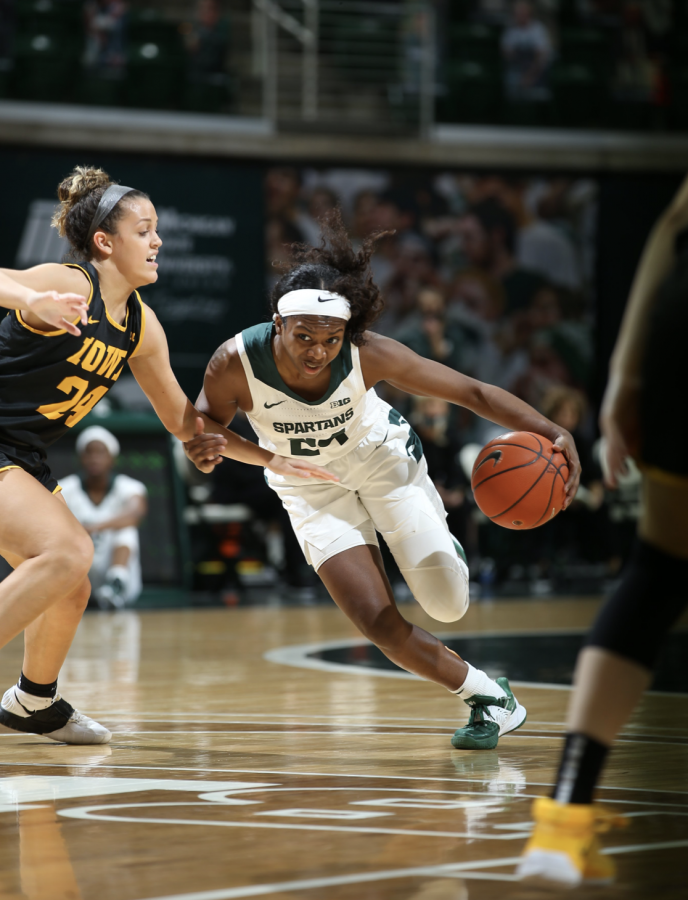 EAST LANSING — The No. 23 Michigan State Spartans (8-1) came into Thursday’s matchup with the No. 12 Maryland Terrapins (8-1) knowing they had to play their best game to win. Despite not winning, the Spartans proved that they can be a legitimate contender in a tough Big Ten.

The Spartans looked like they were going to get blown out after a poor first-half performance in which they would turn the ball over nine times. Maryland was quite the opposite at this point, leading by 15 points heading into the locker room.

If there was something that we learned about the Spartans that we didn’t already know, it was that they won’t go down without a fight. Nia Clouden had a career-high 32 points to go with five assists.

The Spartans had some foul trouble early in this game with Taiyier Parks and Julia Ayrault, which really hurt them down the stretch in this game. When Ayrault was playing, she was able to contribute 17 points and four big shots from beyond the arc. Alisia Smith was big off the bench and grabbed 11 boards after Parks got into foul trouble.

The Spartans came out of the gates hot with an early 13-9 lead over the Terrapins. The Spartans did a really good job of causing disruption in the lanes on defense and forcing Maryland to take tough shots. Clouden and Alyza Winston did a really nice job of getting to the hoop early. Parks was a force in the paint, grabbing five rebounds in the first quarter alone.

Maryland would then come roaring back and jump ahead 22-19 at the end of the first quarter. The Terrapins would finish the quarter making five of their last seven shots.

The Terrapins would then score 14 unanswered points and extend their lead to 35-20 over the Spartans. The Spartans’ eight turnovers in the second quarter helped fuel the Terrapins’ run.

After a small scoring run by the Spartans, the Terrapins would make seven for their last nine shots from the field and take a 48-33 lead into halftime. Clouden kept the Spartans within reach with 12 first-half points. MSU had nine different players get on the scoreboard before the break.

Maryland had Katie Benzan, Ashley Owusu and Mimi Collins all score 10 or more points in a dominant first-half showing on offense. The Terrapins shot 53% from the field compared to the Spartans’ modest 41%.

“The second quarter kind of killed us and we came out with a different mentality for the second half,” Ayrault said, “and we put up a hard fight from that point on.”

Early in the third quarter, Clouden hit a 3-pointer that made her the 29th Spartan in school history to reach the 1,000-point mark.

Maryland got the lead down to 57-50 with a hot streak, where the Terrapins connected for four field goals in a row.

“We were all super excited for Nia on the 1,000 point mark and then it was right back to game-mode,” Ayrault said.

Both teams exchanged shots for a few minutes before the Terrapins would go ice cold, making only two of their final 12 field goal attempts to finish the third quarter. Ayrault’s two 3-pointers would narrow the Maryland lead to 70-59 heading into the fourth quarter.

Ayrault would stay scorching hot, connecting on another 3-pointer to make it only an eight-point lead for the Terrapins. Clouden would then get three points the old fashioned way from a tough layup and foul. Owusu and Collins would then get a couple of easy shots to push the Terrapins over the 80-point mark.

The Spartans finished with a 3-pointer from Winston and a Cook layup to make it only a four-point lead for the Terrapins. Couden would then make it a one-bucket lead thanks to a 15-foot jumper that was answered with a Chloe Bibby layup. Ayrault would then hit a pop-and-shot from the block.

After a few late free throws and a couple of defensive stops, Maryland was able to hold on for the victory.

The Spartans will look to get back on track when they play on Jan. 10 against the Nebraska Cornhuskers (5-3) at the Breslin Center. Tip-off is set for 3 p.m.

Owen Oszust is a women’s basketball beat reporter for WDBM Sports. Follow him on Twitter at @Owen_Oszust.