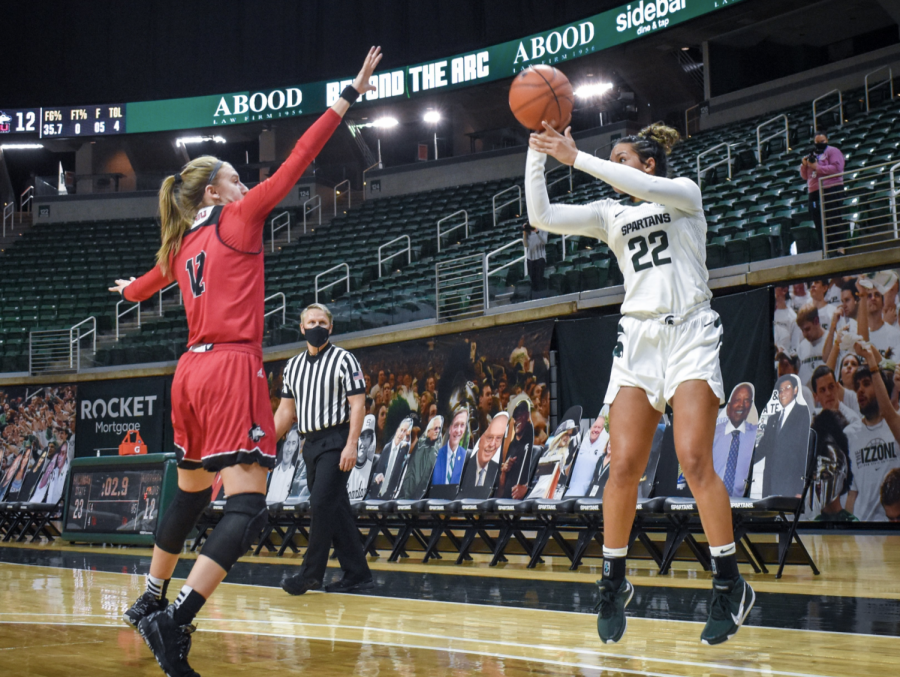 EAST LANSING— The No. 25 Michigan State Spartans improved to 7-0 on the season after defeating the Oakland Golden Grizzlies at the Breslin Center 94-56. The Spartans are 7-0 for the first time since the 2012-13 season when they started 8-0.

MSU got off to a slow start in the first half, and they were only ahead 16-12 after the first quarter. However, as the half unfolded, MSU began to pull away.

They outscored Oakland 26-19 in the second quarter and led 42-31 at halftime.

The Spartans led by 11 at halftime behind Alyza Winston’s 10 points on 4-of-7 shooting from the floor, including going 2-of-3 from behind the 3-point arc. Winston’s ability to create space and drive to the basket early helped give the Spartans an edge in the first half.

Nia Clouden added four points in the first half in six minutes of action before she found herself in foul trouble.

“I think our kids did a really good job in the second half, ” head coach Suzy Merchant said. “I think in the first half, we kind of shot ourselves in the foot a little bit. I mean, give Oakland credit, I thought they had good defensive plays and caused some turnovers.”

In the first half, the Spartans were too casual with the ball as they turned the ball over 14 times.

“So that’s a little uncharacteristic,” Merchant said. “But in the second half, we had a lot more possessions, due to the fact that we didn’t turn it over so much … it resulted in a really aggressive third quarter.”

In the third quarter, the Spartans dominated from the floor, shooting an outstanding 92% on 12-of-13 shooting. They also scored 31 points in the third and held Oakland to its third quarter season average of 16 points.

MSU also held the Golden Grizzlies to 5-of-16 shooting in the third.

Clouden found her groove in the third quarter as she scored 9 points. She finished the game with a team-high 15 points.

Julia Ayrault also established herself as a consistent presence throughout the game scoring early and often. Ayrault scored 14 points and grabbed 9 rebounds as her post play steered the Spartans to a win.

As the game headed to the fourth quarter, the Spartans’ lead increased to 26 points. The MSU starters kept the energy high off the court as they cheered on the second unit, who received a lot of playing time in the fourth quarter.

“We needed one like this, to be honest,” Merchant said. “This game made me a little bit nervous because it was three games in five days, but also because it was the last one before the holiday.”

Merchant added forwards Alisia Smith and Jayla James, both of whom transferred from Penn State, off the bench after being activated from the transfer portal. The move proved to be effective as Smith and James saw valuable playing time in the game.

A Big Ten meeting earlier in the day resulted in both players being granted immediate eligibility.

“I appreciate the Big Ten putting that on their agenda this morning,” Merchant said. “We still have one more process here at Michigan State … you have to certify a student-athlete that they are actually in courses… so our compliance people had our registrar on standby, ready to go.”

Smith, a Lansing native who attended Waverly High School, found out 28 minutes before tip that she was eligible to play. In her Spartan debut, she scored nine points on 4-of-6 shooting.

With the win, the Spartans improved to 17-4 all-time against Oakland and have won the last 13 contests against the Golden Grizzlies dating back to 1982. The two teams did not begin an annual series until the 2011-2012 season.

Due to the postponement of the Ohio State game, which was previously scheduled for Dec. 31, the Spartans will start the new year in West Lafayette against Purdue on Jan. 3. MSU will then host Maryland and Nebraska in East Lansing on Jan. 7 and Jan. 10.