Clouden and Winston propel Spartans to fifth win of season 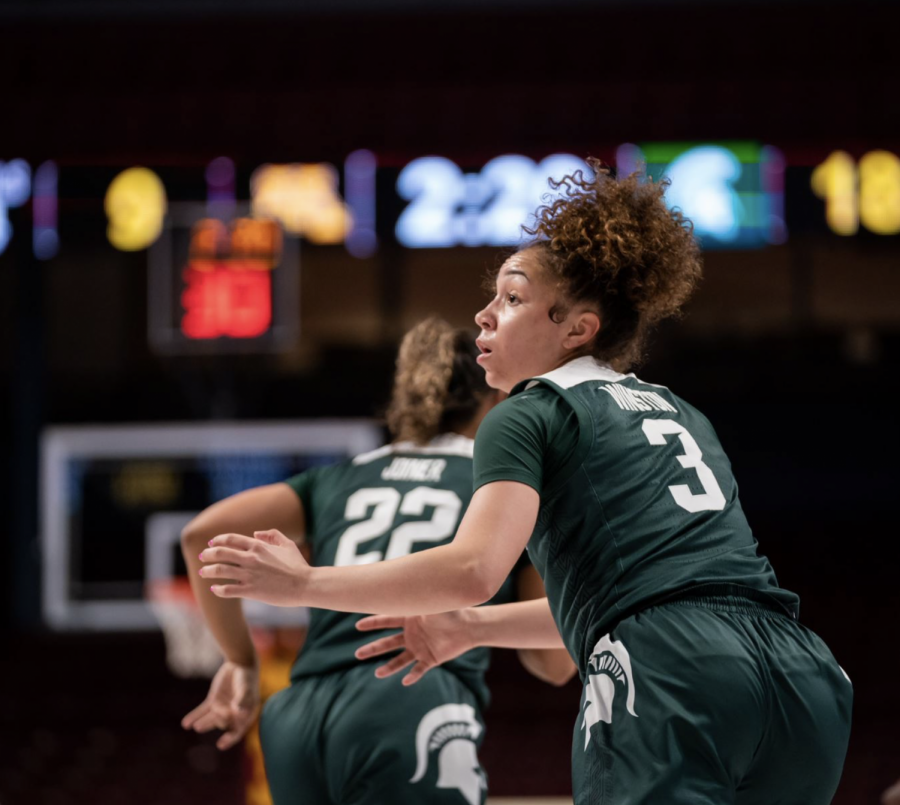 Micaela Kelly scored 26 points for the Chippewas on nine made 3-pointers.

“I think the consistency of our guard play has helped us from a scoring standpoint,” head coach Suzy Merchant said. “I would also say that our bench depth makes a big difference…during this COVID pandemic, we wanted to make sure we had an offense and the depth that we need.”

With the win, the Spartans improved to 5-0 on the season while the Chippewas dropped to 3-2.

“They all run really fast in transition,” Clouden said. “Even sometimes, we have to help on defense if someone might get blown by.”

The Chippewas held a narrow 22-20 lead at the end of the first quarter behind the strength of six 3-pointers, including two each from starting guards Molly Davis and Kelly.  Kelly came into the game averaging 22.1 points per game. Despite shooting nearly 44% from the floor, compared to CMU’s 39% mark, the deep ball kept the Chippewas in the game early.

The back-and-forth seesaw affair would continue in the second quarter. The Spartans jumped out to a 33-27 lead courtesy of seven Clouden points in a two-minute stretch. However, a pair of Anika Weekes buckets closed the deficit, and as a result, MSU went into the locker room with a narrow 40-39 lead.

The Spartans shot 44% from the field in the first half and had eight players score at least two points.

Clouden had 10 points on 4-for-5 shooting at the break; Sophomore forward Julia Ayrault had four points and six rebounds.

CMU was led in scoring by Kelly, who had 13 points and five rebounds in the first half. Davis had a strong half as well with nine points, four rebounds and three assists.

The Chippewas would retake the lead, 51-46, in the early stages of the third quarter. Winston and Taiyier Parks would keep the Spartans in the game as they scored nine and five points in the third, respectively. However, Kelly scored 11 points in the third to keep CMU out ahead by the narrowest of margins.

As a result of her three made 3-pointers in the third, CMU held a narrow 62-60 lead heading into the final frame.

“The biggest difference for me is the confidence,” Winston said.”I think I was capable of being better last year… the confidence plays a huge part and also just studying the game a lot more than I did last year.”

The trio of Clouden, Winston and Parks would catapult the Spartans to a 10-0 run halfway through the fourth quarter to give MSU a 75-65 lead. Despite 26 points from Micaela Kelly, the Spartans would hold on for the narrow victory. MSU outscored CMU 19-8 in the final quarter.

“She (Parks) just kind of imposed her will, and so when she was in there, we decided we were going to run more of our quick hits to give her an opportunity,” Merchant said.

The Spartans will look to continue their winning ways as they welcome Northern Illinois to the Breslin Center this Sunday at 3 p.m.