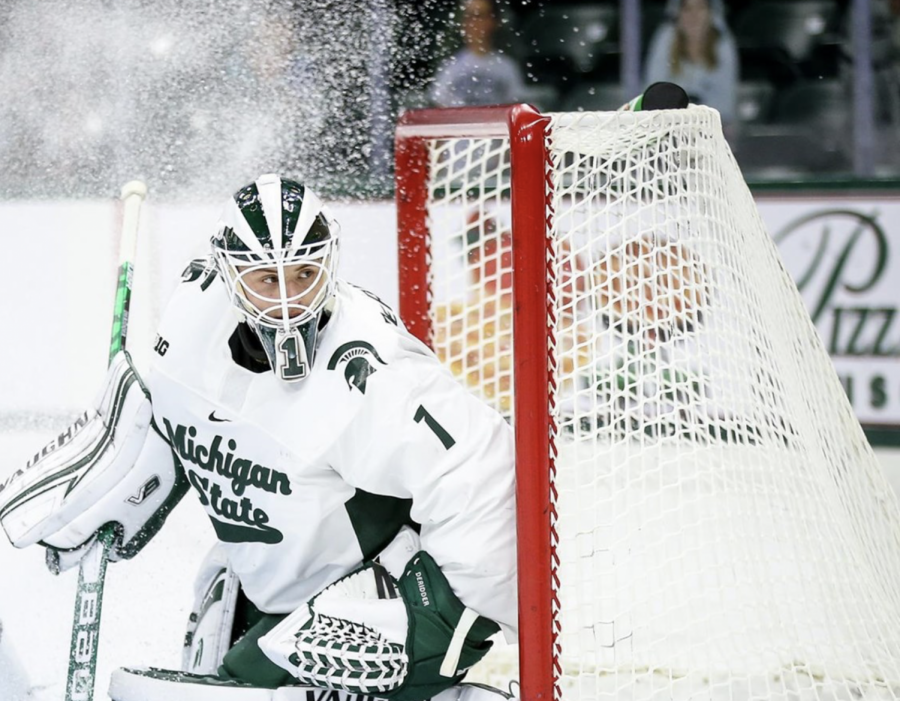 Notre Dame brings back a multitude of offensive talent this season with notable players such as Alex Steeves, Graham Slaggart and Nick Leivermann all returning for their junior year. Steeves returns from last season as Notre Dame’s leading point scorer. Steeves, who accounted for 28 points (including 11 goals) in 36 games last season, has accrued eight points in eight games this season and has a three-game goal streak heading into the series.

The Fighting Irish are coming off a series split against the No.14 Ohio State Buckeyes last weekend. The Irish, who had just come off a split against Arizona State, won game one at Compton Family Ice Arena 3-0, giving goaltender Dylan St. Cyr his third career shutout. However, the Buckeyes came back to win game two by a score of 3-2.

Though the Irish will retain most of their roster heading into this weekend, they will be without freshman forward Landon Slaggert, who was named to the 2021 U.S. National Junior Team and will compete in the IIHF World Junior Championships. Slaggert is the 23rd Notre Dame player to take part in the event, which will begin on Dec. 25 and run through Jan. 5, 2021.

Without Slaggert, Notre Dame still poses a threat to the Spartans. Junior Nick Leivermann enters the series with a career-long four-game point streak. His six points in eight games is a drastic improvement from last season when he amassed 12 points in 32 games. Seniors Matt Hellickson and Colin Theisen come into this weekend having played 125-straight games, the most by any active Big Ten players.

Notre Dame is coached by Jeff Jackson, who graduated from MSU in 1978. Jackson boasts a 31-18-11 record against his alma mater, including his six seasons at Lake Superior State. Jackson is a former coach of current MSU coach Danton Cole and assistant Chris Luongo, during their days in junior hockey with the Detroit Falcons.

The Spartans head into this weekend on two weeks’ rest after their matchup with then-No.14 Wisconsin was postponed due to positive COVID-19 cases within the Badgers’ program. Michigan State currently sits at the bottom of the Big Ten and rides a three-game losing streak heading into this weekend. The Spartans will look to take advantage of having more time to recuperate since their Dec. 4 loss to Minnesota and end 2020 on a high note.

The Fighting Irish will win if…

They score first. Michigan State is 1-3-0 this year when its opponent scores first. Last season, the Spartans were 4-16 in this regard. Michigan State is also 0-3-1 when trailing after two periods. The Fighting Irish, on the other hand, are 4-1 when scoring first. If the Irish can light the lamp first, especially in the first period, they will have a good chance at taking one or both games this weekend.

The Spartans will win if…

They hold Notre Dame under 30 shots. Michigan State is 1-3-1 when giving up 30 or more shots. Notre Dame comes into this series at eighth in the nation in scoring with 21 goals on around 29 shots per game (24th in the nation). The Spartans will need to limit the amount of shots DeRidder faces and keep Notre Dame from reaching high-quality scoring areas.