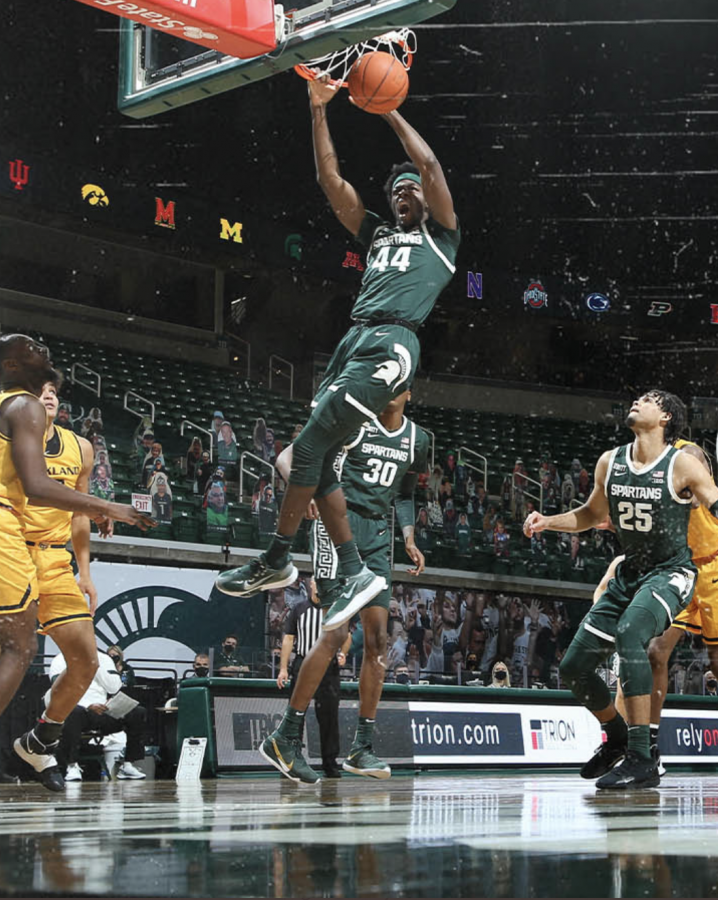 EAST LANSING — Despite all of the changes to college basketball this season, one thing remained constant; Oakland playing Michigan State in December, giving the Spartans a scare early on.

Michigan State was able to pull away in the second half for a convincing 109-91 victory, but the unique 2-2-1 matchup zone from the Golden Grizzlies gave MSU fits through the first half. The Spartans turned the ball over 18 times, including 11 in the first half.

After a hot start from Aaron Henry, who scored eight of Michigan State’s first 13 points, the Spartan offense began to sputter. After jumping out to a 26-15 lead in the first seven minutes, the first half was all Oakland.

Gabe Brown led all Spartan scorers with a career-high 20 points, including 4-of-6 from three. Brown scored 14 of his 20 points in the second half, including a posterizing slam on an alley-oop from A.J. Hoggard.

“Gabe is my favorite player,” Henry said. “He’s always putting in work in the gym, more than you see, more than I even see. And to see that work pay off on the court for him is just great.”

The Golden Grizzlies should thank Cleveland State transfer Rashad Williams for keeping them in the game, as he scored 23 points in the first half, including six 3-pointers.

Williams was able to get whatever he wanted in the first half, but MSU made him a priority in the second. Williams scored 13 points in the second half on 4-of-12 shooting.

Williams and leading scorer Jalen Moore combined for 62 of Oakland’s 91 points and seemed to be the only source of offense for the Golden Grizzlies. The two guards were able to score at will throughout the game and kept Oakland in the game for a long time.

“Greg Kampe is a hell of a coach, and I’m not saying that because he’s my friend,” MSU coachTom Izzo said after the game. “No matter if we are first, fourth or fifth in the country, Kampe has his team ready to play and will compete with us.”

The defense, which has been the strength of Michigan State so far this season, was unable to stop the dynamic guard duo for the Golden Grizzlies. 91 points is the most points given up by the Spartans this season.

The Spartans were able to dominate the boards throughout the game, taking advantage of Oakland’s lack of size and struggles to rebound out of the zone. MSU had a 52-20 advantage on the boards, including a 31-7 advantage early in the second half.

Michigan State was able open up the lead in the second half thanks in part to a balanced effort from the entire team on offense. The Spartans had seven scorers in double digits and shot 54.3% from the field as a team.

“We are very deep,” Joshua Langford said. “We have a lot of guys that can score for us, play defense, and go get boards.”

The Spartans shot 55% in the second half en route to a 65-point half. That was their best offensive performance in a half all season after keeping the Golden Grizzlies in the game early.

Michigan State will continue its undefeated journey next Sunday in its first Big Ten game against the Northwestern Wildcats.