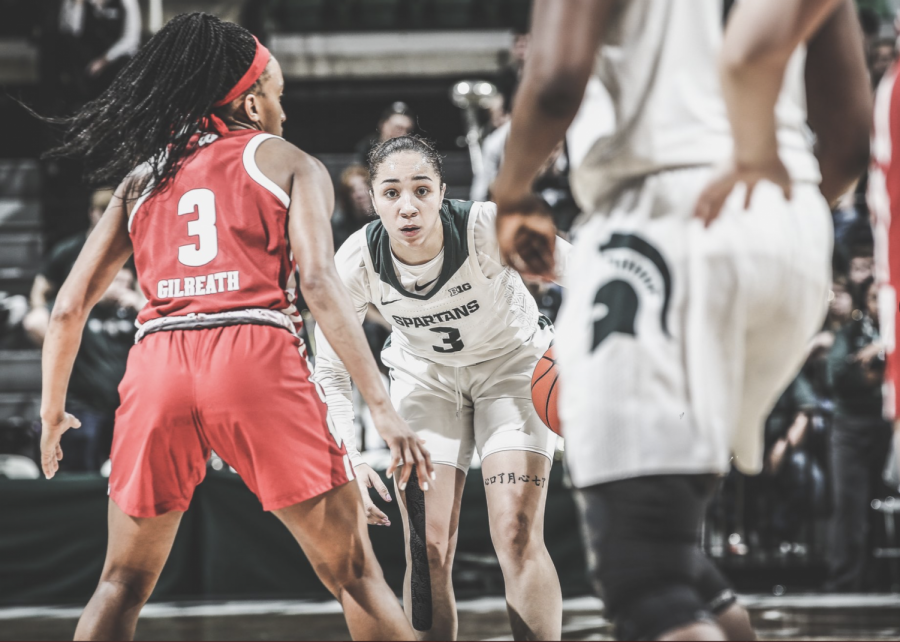 EAST LANSING — The Michigan State women’s basketball team (3-0, 1-0) defeated the Minnesota Golden Gophers on the road (1-2, 0-1) in their Big Ten opener 81-68 to remain undefeated on the young season.  Nia Clouden scored 25 points on 10-for-16 shooting to go along with five steals.

Sophomore guard Alyza Winston chipped in with 20 points, a new career-high. Julia Ayrault and Tory Ozment both scored 10 points for the Spartans.

The Spartans quickly jumped out in front thanks to a scorching start from Nia Clouden. After Minnesota scored the first basket, MSU went on a 16-0 run to earn an early double-digit lead. Clouden hit all five of her shots in the first quarter and had 14 points through one.

When Clouden went to the bench, Alyza Winston picked up right where Clouden left off, knocking down three triples and setting up her teammates as well. The two guards combined for 29 of the Spartans’ 48 first-half points.

Thanks to a 3-point shooting barrage by guard Gadiva Hubbard, the Golden Gophers narrowed what was an 18-point deficit to a manageable 48-38 hole at halftime.

The third quarter was mainly even as the Gophers continued to knock down threes, but the Spartans weathered the storm to maintain an 11-point lead heading into the final 10 minutes.  MSU outscored the Golden Gophers 20-19 in the third quarter.

The Golden Gophers’ leading scorer, Jasmine Powell, fouled out of the game just as the fourth quarter began, and momentum immediately started to shift back towards the Spartans. They were able to pull away and finish with the 13-point win.

MSU shot 43.2% from the floor in the game and outrebounded Minnesota by a 40-36 margin. The Spartans also outgained the Golden Gophers 17-9 on the offensive glass.

The backcourt for MSU was really the focal point of their offense, with Winston and Clouden combining for 45 points.

Despite scoring 20 points, Winston had a very strong game on both ends of the floor. Nia Clouden was her usual self, knocking down shots with ease and smoothly blowing past defenders for easy baskets on her way to 25 points in the win.

The Spartans dominated the game defensively, creating 20 turnovers and bottling up Powell, who has been one of the most prolific scorers in the conference. Powell entered the game averaging 21.5 points per game.

“I thought we did a good job on their star player, Jasmine Powell,” head coach Suzy Merchant said, “I didn’t like us in the first half against her, in terms that she was getting a little deep in our defense… But I thought we did a much better job in the second half and got her that fourth foul, which I thought was big. Actually, in the timeout, I said, ‘We gotta get this kid out of the game, the best way to do it would be a charge.’”

Mardrekia Cook took a charge coming out of the timeout for Powell’s final foul, and the Golden Gopher offense was not the same after she left.

Powell finishes the game with 16 points and six assists.

Ohio State transfer Janai Crooms made her debut in a Spartan uniform and scored three points and added two rebounds and two assists off the bench.

She was the first Spartan to check in off the bench and showed flashes of the playmaking ability that coach Suzy Merchant was excited about. She also showed some of the rust that comes with not playing a game in several months, turning the ball over three times and converting on only one of her four shots from the floor.

For the Gophers, it was Gadiva Hubbard who led the charge and attempted to pick up the slack for Powell, who only played 23 minutes. Hubbard hit all three of her triples in the second quarter to help keep Minnesota in the game; she finished with 17 points.

Michigan State will return to the court on Saturday afternoon at the Breslin Center against the Iowa Hawkeyes, who remained unbeaten on the season after beating Iowa State at the buzzer 82-80 earlier in the night.