Magee: OSU’s talent is on another level 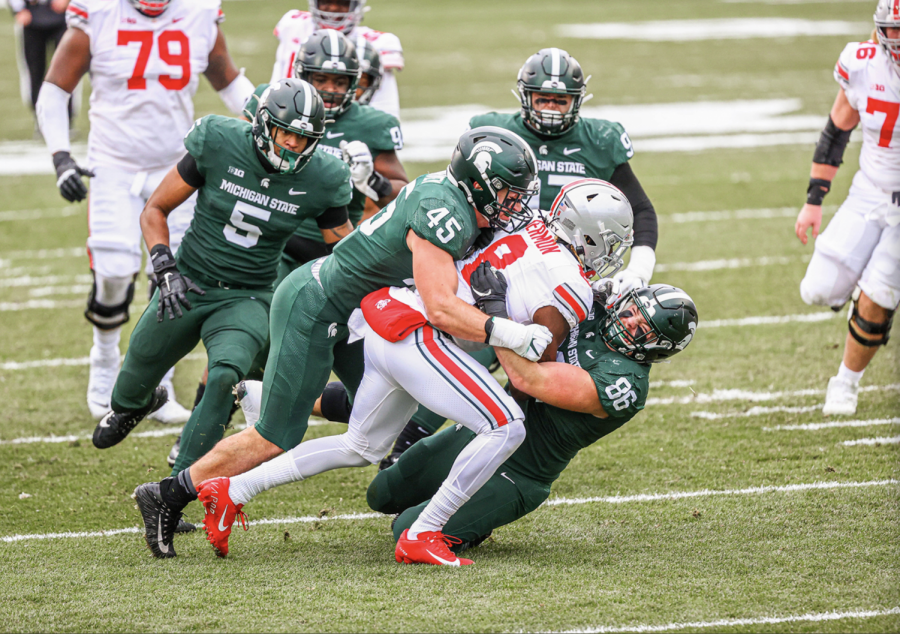 EAST LANSING — What happened Saturday in East Lansing isn’t something that occurred out of the blue. An Ohio State team with supreme talent, even at the backup levels, destroyed Michigan State and it was never close.

The Buckeyes were without notable starters Josh Myers, Thayer Munford, Nicholas Petit-Frere, Paris Johnson and Tuf Borland… all former four and five-star recruits that could be future NFL draft picks.

With these players out, OSU had every reason to make excuses. It had backups in, on the road and missing its head coach. It seemed like a recipe for disaster.

The only problem is the OSU starters vs. MSU, while some are backups, are just as highly-rated — if not better — than MSU’s players. They aren’t allowed to make excuses, in my opinion. No one will have any pity for them if they lose. They showed up to play, and with the blowout Ohio State put on, talent differences were obvious.

Max Wray got his first career start at right tackle for the Buckeyes. He was a four-star out of Franklin High in Tennessee. Harry Miller was getting his fourth career start but was forced into the center position, one that he was obviously not comfortable with. After an abundance of horrible snaps, it was clear it was not his true position. He was a five-star out of Buford High in Georgia. Dawand Jones and Matthew Jones were also two Buckeyes getting their first career start vs. the Spartans. They were three and four-stars, respectively.

Talent is something that comes easily for OSU. The Buckeye name sells itself. Can you imagine if OSU coach Ryan Day came into your living room at age 17 and told you he was going to mold you into a NFL superstar and multimillionaire? Every last one of us would eat that up and jump at the opportunity.

The only problem is that first-round grades and millions of dollars is not truly a reality for most players that go to these top schools. It should be something that MSU coach Mel Tucker takes advantage of in the recruiting process. Let me explain.

While MSU is still a high-quality football program — one that tons of high schoolers would do anything to play for — Tucker needs to sell recruits on early playing time. He said the “best players will play, regardless of class” and that has been the case so far.

We’ve seen this come true a lot this season, especially for a freshman like Angelo Grose, who is turning heads of Spartan fans. Tucker has emphasized the importance of recruiting every day and recruiting his own players as well. It’s a big reason why he’s making over five million dollars per year.

The Spartans produce true NFL talent every couple of years and have one of the longest streaks of having a player drafted at 80 consecutive years. That’s nothing to be ashamed of. This is something Tucker should sell to high school players equivalent to OSU’s bench… early playing time with a high chance of getting noticed with hard work.

This game was an indictment on the actual talent difference between OSU and the rest of the Big Ten. Coach Mark Dantonio did not leave Tucker with much, and it will take a few years to get guys that can compete with a team like this Buckeye one. The Spartans’ staff shouldn’t focus on beating out programs like OSU for recruits, but go after their lower-caliber players; hey are still highly rated, and MSU can offer them the opportunity for playing time and more exposure than a bench spot could provide.

On a more national landscape, I think this game is a flash in the pan of a large problem we have seen with college football. Ohio State, Clemson, Alabama, Georgia and Oklahoma, while special, are recruiting well because of their brand. If you give any power five team their talent, they would win too. It’s not like it’s an even playing field.

These recruits see flashy lights, prime time games and first-round picks and want that to be them. While some do achieve this, I look at it deeper. What about the four-star that goes to one of these programs and sits every year because they’re behind a litany of five-stars? What would it look like if they came to a MSU-type program and played pretty soon after getting to campus? Would that close the gap? I think so.

This would also fix a transfer portal problem we have in collegiate athletics right now, and it would make players happier in the long run. While it’s easy for me to say as an outsider, I understand the difficulty of turning down the diamond programs. But, on the other side, I think it would lead to a higher draft outlook for players riding the bench for blue bloods.

More than anyone, these programs are a majority of guys that have otherworldly talent and size and are wasting it. There are only 11 guys that can start for either team. Tucker needs to take advantage of these recruits and sell them beyond the name, beyond the recognition and beyond the followers.

Parity is a reason I love sports. Sometimes, I feel like it’s not that way in college football. If I asked you before the season who would be in the playoff, you could give me a list of six or so teams that could make it. I want this to change.

I’m not any different than you. I want to see the best teams in the playoff, too. But the gap between these current playoff teams and the rest lies upon high school football players choosing between the glitz and glam or the situation where they know success is imminent.

It’s not an easy choice.