We Play It For The Music | Bioshock: Infinite 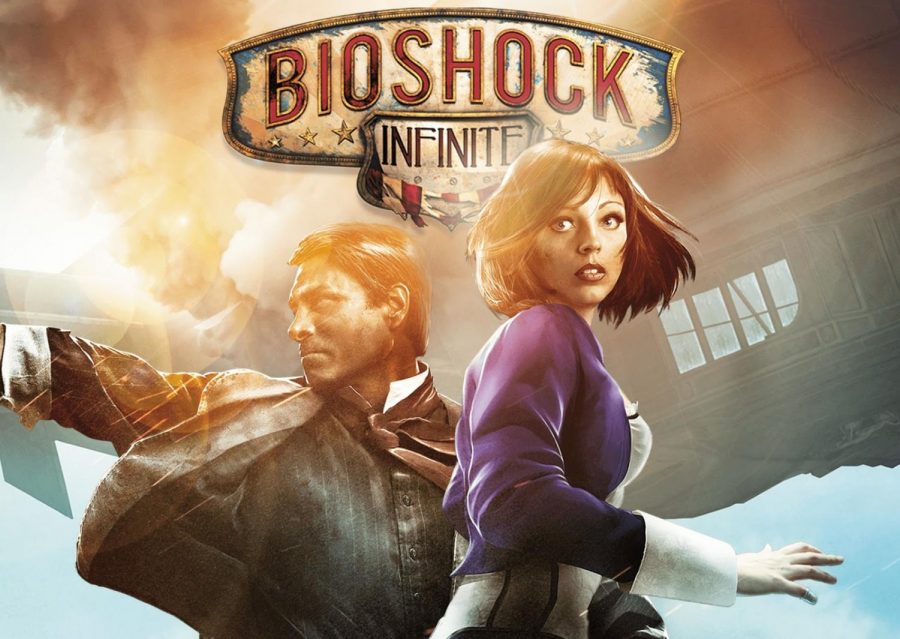 (CONTENT WARNING: This article contains contains references to some subjects that may be triggering.)

If there was ever a game series that highlighted the importance of details, it is the BioShock series. The retro-futuristic game series is critically acclaimed for its storylines, game mechanics and art style. Yet there is a hidden power in the series’ music, especially the third game, BioShock: Infinite.

The game follows the story of Booker DeWitt, a former Pinkerton, on his mission to rescue a girl named Elizabeth from an idyllic floating city, Columbia.  Set in 1912, DeWitt soon finds himself embroiled in an uprising as people who have been enslaved unite with a rebellion group known as the Vox Populi against their oppressors.

BioShock: Infinite is a dark game that delves deep into the dirty and evil side of Columbia, a city that appears to be perfect and pristine but is rotted and corrupted from the inside out. As a warning, this game does not try to soften the ugliness and horrors of racism and slavery. While the storytelling and small details within the game really make sure to enhance the horror of the government and its citizens’ racism, the music takes it to another level.

With original music composed by Garry Schyman, Jim Bonney and Kevin Levine, the music within BioShock: Infinite is closely tied to the storyline of the game. Each song has its own role, and each does its job well. Music within the game plays off the scenes, drawing the players deeper into the world of Columbia.

Schyman uses instrumental songs to help build the world of Columbia. The second song on the soundtrack, “Welcome to Columbia” is a great example of that. It starts off with loud, crashing violins before a deafening silence, followed by a soft piano playing. It plays on the dual nature of Columbia, while also matching what is happening on the screen, in which DeWitt rockets into space before getting to see the beautiful floating city in the sky. There is a sense of wonderment and adventure mixed into the piano piece, yet there is still a moment of hesitation that not everything is what it seems.

The composers keep this up, using the music to perfectly match the scenes they are representing. When there is a moment of levity and fun, like when Elizabeth gets to see the outside world for the first time, they give you happy pieces of her enjoying the freedom and the fresh air. Moments that are somber and solemn are played with mournful and haunting violins.

However, music from the game is not all instrumental. What’s interesting about BioShock is, although it is futuristic in the sense of technology, it is still set in a real musical time period.. This allows the game to pull from music from the early 1900s, including “St. James Infirmary Blues” by Louis Armstrong.

The game also gives players modern version of period songs. This freshens up the music, so it doesn’t become completely stale listening to only early 1900s versions of songs for hours of playing. For example, they had New Yorker, Jessy Carolina cover Turner Layton’s “After You’ve Gone.”

However, the most enjoyable moments are when the game gives you moments of anachronistic songs. These songs can be re-imagined into a 1912 version, like when a barbershop quartet in the city square of Columbia gives a rendition of The Beach Boys “God Only Knows”  and hearing a ragtime version of Tears for Fears’ “Everybody Wants To Rule The World.”

One of the most random and delightful moments is when they play Cyndi Lauper’s pop hit, “Girls Just Want To Have Fun.” Part of this may be because in the game you can open “tears” holes within reality that lets you jump to a different timeline. So, when the player gets closer to some of these tears, it gives them a delightful moment of songs they recognize.

Unfortunately, these songs are kept from the official game soundtrack, as they are meant to be sort of Easter eggs for the gamers. But, they still play an important role in the game, as they show just how mystical Columbia is and how clear there’s something not completely right with the city.

Finally, the game has one song that plays several times throughout in different versions. “Will the Circle Be Unbroken” is an hymn written by Ada R. Habershon with music by Charles H. Gabriel, in 1907. The song becomes a bit of a theme for the game as it follows a main idea—can DeWitt and Elizabeth break a pattern that keeps happening?

My favorite version of this song, performed by the voice actors of Elizabeth and DeWitt, ended up winning a Spike Video Game Award for best song.

What’s frustrating is that the music is so good, it is hard to get your hands on a copy of the soundtrack. It was originally released with the collector’s edition and alone on the 2K Games website, but now the soundtrack is being resold on the internet for hundreds of dollars. Furthermore, you can’t stream it on Spotify or Apple Music. However, many Infinite fans have created playlists on YouTube over the years.

The beauty in BioShock: Infinite is that the music perfectly fits the feel of the scenes. If one is listening to just the soundtrack, without playing the game, some of the songs might seem short, but while playing the fast-paced game, it really feels right on point. It’s an uncompromising and somber game with powerful music to enrich the narrative, playings on the gamer’s emotions. Still, it also gives you moments of light and joy, making the experience all the more fulfilling.

If you’ve never played BioShock: Infinite, I would highly suggest it.