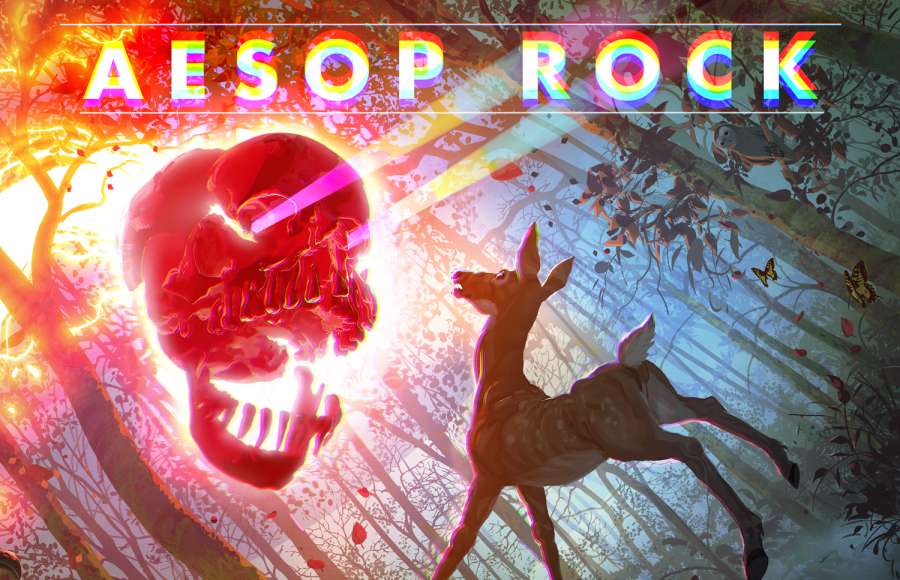 The title “king of the underground” in reference to hip hop has been a label relentlessly sought after since its inception, given only to the most notably gifted and creative music-makers trying their best to stay out of the spotlight. This title jumps from MC to MC at the drop of a hat, with a few namesakes keeping the title for finite eras, such as MF DOOM, Slug, Eyedea, Jedi Mind Tricks and many more.

Among the mix, slam poet/tattoo artist/MC Aesop Rock (Aes) sits unconcerned atop his own monumental accomplishments. Boasting now eight studio albums, four EP’s and 13 different production credits, Aes’s 25 year legacy in the underground is one that is sure to continue long after his retirement.

For those unfamiliar with Aes’s nearly impenetrable metaphors, dense lexicography and zany delivery, his newest album Spirit World Field Guide will certainly be a jarring introduction. What may first seem like incoherent jargon is simply his style of delivering a mind-bending story that works as a puzzle the listener has to unravel.

“Crystal Sword” off of Aes’s newest album presents the audience with a fascinating lyrical challenge accompanied by groovy bass, wavering synths and hard-hitting snares. Aesop begins the track with a verbal sucker punch, sure to catch some off guard.

“Carry his own water as nary a known other/

Read a palm when I parry apparently no sucker/

Here Aes states that he is carrying his own water, which is typically a phrase used to indicate that someone is participating in something they either aren’t interested in or want no part of. Aes’ lucid flow continues as he weaves a tale of a man discontent with his own surroundings. He tries to escape this boredom through menial tasks and mundane activities.

A second underlying wave of rollercoastering synths joins into the fray as Aes details his travels through the spirit world.

“Burn sage in the alley with various ghostbusters/

Sea of disembodied bones knocking on your rods and cones/

Some resort to scuba gear, some return to hobbit holes”

Here, Aes pokes fun at the human instinct of fight or flight, and how some people’s curiosity outweighs their fear of meeting the same grizzly fate as those who had been disembodied. Aesop’s flow becomes more vigorous as he laments his frustrations regarding people who have deceived him.

“And every time you liars talk,/

fish and birds start dying off/

Following this descriptive interpretation of the boiling anger that arises when one is lied to, Aes continues his laborious storytelling up until the very last seconds of the song. The music fades as Aes completes his tale with a harrowing proclamation.

“I’m working on my hell and forth/

It’s bound to be a bumpy ride/

Deeper through the death and gore/

Coming out the other side”

A consistently perplexing MC unforgiving to those not willing to take the time to understand his music, Aes once again delivers a remarkably polished narrative filled to the brim with delicate intricacies. For those willing to take the time to decipher the artist’s deeper meanings and metaphors, a world of fantastical storytelling awaits them with every song in Aes’ vast discography. “Crystal Sword” adds yet another chapter to Aes’s neverending anecdote of the human world and a world that may lay beyond our comprehension.