Jamming in a New Medium | Virtual Concerts in the Pandemic 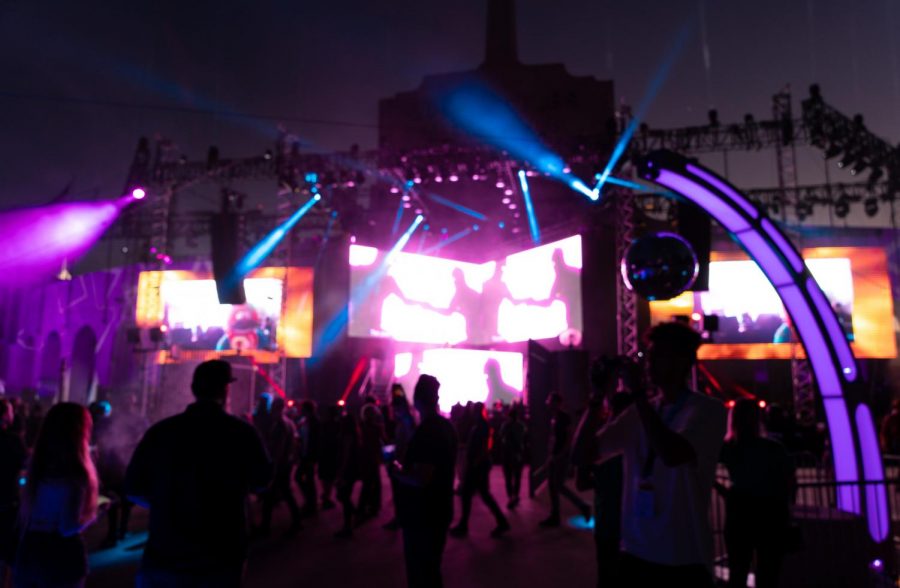 Covid-19 has all but ensured that large gatherings of people in close proximity will remain a dangerous past time for the foreseeable future. It’s taken a heavy toll on a plethora of activities that people enjoy, one of which being concerts. With thousands, if not hundreds of thousands, of people packed together and dancing, an outbreak of Covid-19 is nearly impossible to avoid.  Because of this, a vast majority of artists that would usually be touring right now have opted to skip out on tour for at least the coming months, if not longer.

However, in the current stream-dominated music market, opting out of concerts means a potentially fatal loss of essential cash flow for most artists. Simply relying on streams and online merch sales really only works for artists big enough to sustain themselves in the public eye without being seen in person. While this may seem tragic, humans did what humans do best when given a difficult situation such as this, and they adapted. And one of the greatest examples of this adaptation in a world plagued by a global pandemic comes from a rather unlikely source—Fortnite.

For our readers who didn’t immediately click away at the mention of Fortnite, here’s a brief history of the game’s relationship with concerts and music. On Feb. 2, 2019, Fortnite held an in-game event featuring Marshmello as a digitally implemented DJ on an in-universe stage set within the game’s map. Each grouping of 60 players (all given a nifty Marshmello face hammer) would get the chance to drop out of the battle bus down onto the concert stage, where Marshmello would appear. What followed was (aside from the gamified avatars, weapons, screen separation, etc.) as close to a real-world Marshmello concert as one would get. “Check This Out” blasted through the arena as stage lights flashed alongside holograms of massive human bears dancing on top of the stage. Avatars would flex their various dance emotes as the players indulged in this unique experience.

While this was in no way the first virtual concert, Fornite provided a unique experience for the gaming world and was, for many, the first major virtual concert they had attended. The concert generated an enormous amount of revenue for Epic and was an undeniable hit among fans of both the game and Marshmello.

So naturally, Epic seized the next available opportunity to host a live concert within their game. Thus, the “Astronomical” event featuring Travis Scott, of recent Astroworld fame, was born. As an A-tier artist constantly under the public spotlight, the announcement of a Travis Scott virtual concert being held within Fortnite drew the attention of many. With the eyes of the world upon them, Epic did not disappoint.

Using the same format as before with some minor tweaks and upgrades (and pumping in some free in-game Travis Scott merch), the “Astronomical” event had players launching from the battle bus into the Fortnite map, a glowing beacon indicating where to land. Upon reaching the island concert stage, players witnessed an interdimensional portal opening to reveal an Astroworld-themed amusement park planet, reminiscent of Travis’s real-life Astroworld concerts. The magical planet approached the players in-game as Travis’s chart-demolishing hit “Sicko Mode” played. At the beat switch, an avatar of Travis Scott the size of a skyscraper entered the map, glitching back and forth around the arena as he performed for the virtual audience.

Players were then treated to an eye-popping, speaker-knocking trip through a myriad of colorful worlds as Travis ran through some of his most popular songs. From demonic fire storms featuring ghostly mirages to psychedelic rainbow waves to an underwater excursion accompanied by swirling sea life, and finally to an awe-inspiring cosmic journey towards a beaming horizon (where Travis first debuted his collaborative single “The Scotts” with Kid Cudi). Needless to say, Epic had upped their virtual concert game tremendously. And that increased effort was met once again with massive success.

Thank you to everyone who attended and created content around the Travis Scott event!

Both of these events had happened before the Covid-19 pandemic ravaged the world and canceled concerts globally. Yet the foresight persisted, and Epic has stated that they will be continuing this concert series through the pandemic. However, for those artists that are not to be included in this concert series, creativity is needed in order to remain relevant in the public eye and give the fans the live music they crave.

A veteran of internet culture, it seems only fitting that Joji would be one to adopt an entirely virtual style to his concert series for his most recent album, Nectar. Joji presents: The Extravaganza was held on October 23rd and 24th at 7 pm and 10 am. Held as a ticketed one-time-only live-streamed event, Joji Presents: The Extravaganza was a calculated blend of theatrical comedy and live musical performance. Joji quipped and sang to a virtual audience with his usual cynically confident bravado, poking fun at the various concert elements missing from the occasion due to the pandemic. Joined by his trusted scarecrow pianist, Joji performed his hit single “Sanctuary” while sitting in a dunk tank, bellowing chords as a cast of characters threw balls at his cage, attempting to dunk him.

Following some more wacky hi-jinks, including a magician, a surgical operation and a song performed entirely in a horse costume, Joji capped off his virtual mishmash show with a piano rendition of his uber-popular single “SLOW DANCING IN THE DARK.” Dressed in the same infamous white tux from the music video, Joji performed his ballad alongside the scarecrow that had accompanied him throughout the show. In typical theatrical fashion, Joji concluded the live stream by inviting his various actors and actresses on stage to celebrate the finale, before promptly murdering one of the stage technicians and sprinting off into the blinding light.

Following the ever-expanding list of top-tier artists moving to different performance platforms, Lil Nas X, known for his hit single “Old Town Road,” performed a dazzling concert inside the online world-building computer game Roblox. It featured a wild west/Las Vegas neon blended set design, and a larger than life in-game avatar of the pink and pearl-studded cowboy singer himself. Lil Nas X Performed two of his biggest hits, plus a special sneak peek at his upcoming single “Holiday” on an evolving stage that never seemed to settle for anything less than spectacular. Ending his set in a winter wonderland surrounded on all sides by dazzling lights and hundreds of Roblox sprites clamoring to get the best view,  he concluded his show in an elegant fashion, thanking his viewers for attending the concert and shuttling off toward the bright sky up above.

And now the moment you’ve all been waiting for: a never-before seen virtual performance from @LilNasX.
This one-of-a-kind show is breaking ground starting at 1 PM PST in the Lil Nas X Concert Experience on #Roblox: https://t.co/SPfShfbTev #RobloxPresentsLNX #LilNasXHoliday pic.twitter.com/A8A4bMBBoY

Though they are not the concerts we all know and love, virtual concerts, when given the creative energy and raw talent, can be absolutely stunning experiences worthy of their admission price. What they lack in physical closeness and that living-in-the-moment rush, they make up for in the limitless opportunities for creative expansion offered by their digital nature. Billboard has made a wonderful cohesive list of the wide array of different artists switching to a virtual format for their upcoming concerts.

The harsh reality is that this pandemic is here to stay, at least for the time being, but that doesn’t mean we can’t enjoy some of our favorite artists live. Plus, they now have infinite possibilities and opportunities to bolster their presentation game and deliver immaculate and entirely unique experiences that are only limited by their creativity. And with the implementation of the internet—our experiences will know no bounds.