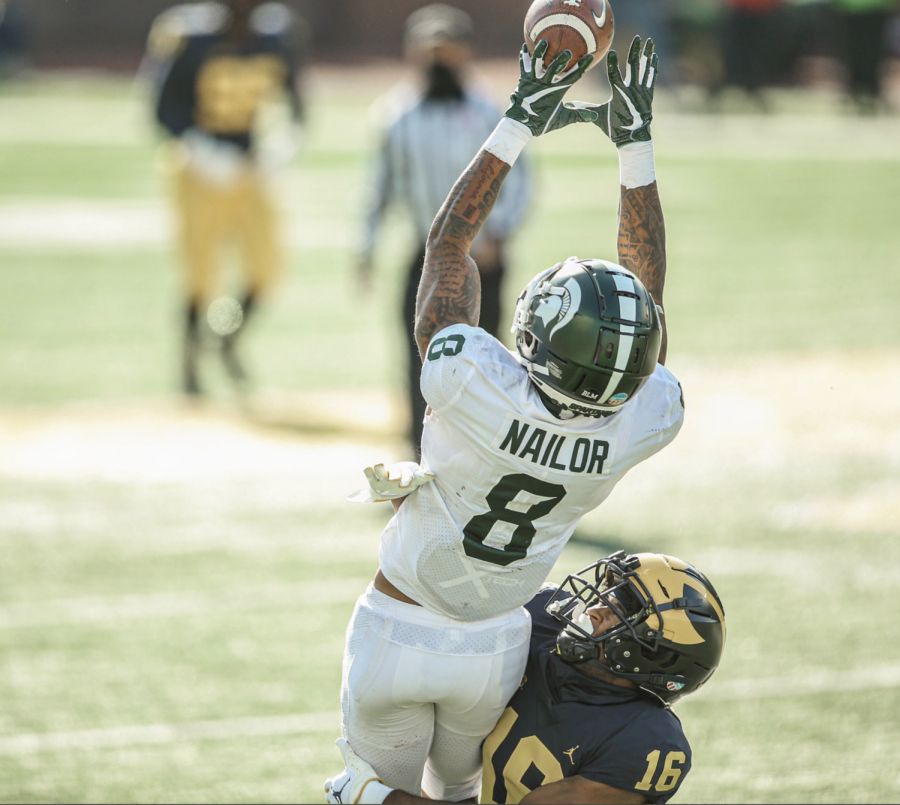 EAST LANSING — The Michigan State football team has been a case of Jekyll and Hyde through the first three games of this season after an opening loss to Rutgers, a big win over Michigan and then a 42-point loss to Iowa.

A big part of the difference in those games has been the offensive performance. In the win over Michigan, the Spartans were in control offensively with zero turnovers and 196 receiving yards from freshman Ricky White. In the losses to Rutgers and Iowa, the Spartans  averaged five turnovers per game.

The next step for MSU is consistency. The Spartans know where to start. As wide receiver Jalen Nailor said on Wednesday, the Spartans “just gotta limit the mental errors.”

Nailor has been a big part of the MSU offense through three weeks, as the redshirt sophomore has 12 receptions for 271 yards for an average of 22.6 yards per catch. A big part of the breakout production from Nailor can be attributed to offensive coordinator Jay Johnson’s offensive scheme, as the Spartans have gone deep a lot more than in past seasons.

Nailor also has been able to stay healthy this season, which has been a big improvement from his first two years in East Lansing where he was limited by injuries consistently. He said that he was rehabbing all the way through quarantine from his latest injury, but feels good now.

“It took awhile for me to get my wheels back, but I think they’re back,” Nailor said.

If the Spartans look to have success and consistency, they are going to need Nailor to be healthy, and the offense to take care of the football going forward. They won’t have much time to catch their breath, as they host No. 10 Indiana (3-0) this week before going on the road to face Maryland (2-1).