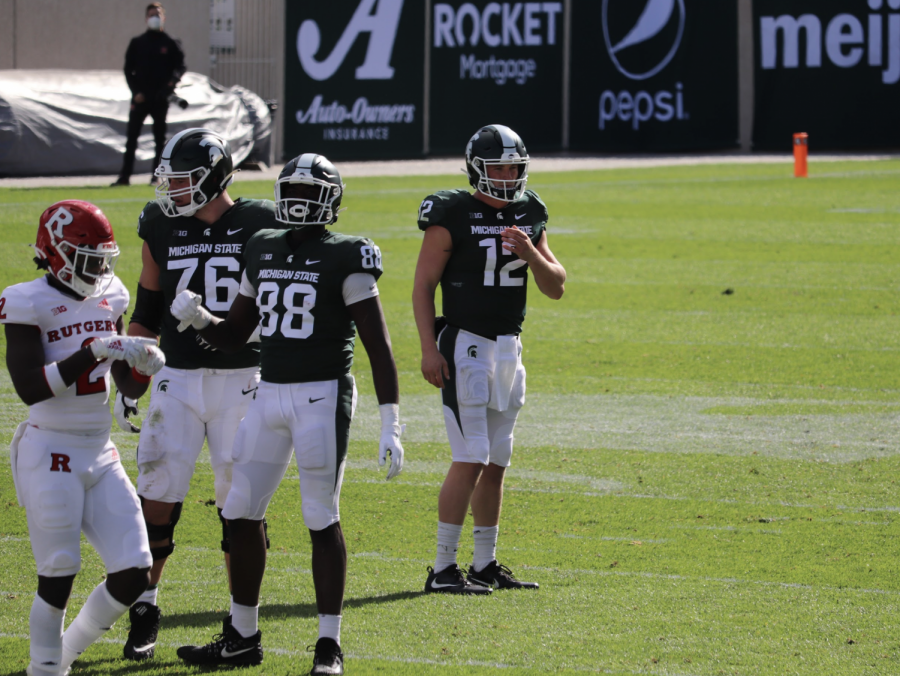 During the Michigan game a week ago, the Spartans held onto the ball like their lives depended on it. No interceptions. No fumbles. Michigan State played about as clean of a game as they hoped.

Saturday against Iowa, the Spartans turned it over several times, and quarterback Rocky Lombardi did not look as crisp. He had three interceptions and made several other bad decisions. He was even pulled in the fourth quarter because of the massive Hawkeye lead.

Michigan State was brought back to earth Saturday with a humiliating loss to an 0-2 team, and things don’t get any easier anytime soon. Next week the Spartans play Indiana, a top 15 team with an electric quarterback in Michael Penix Jr.

If the Spartans want to have a chance against the best team they’ll have faced this year, limiting turnovers will be one of the most important facets of the game.

Iowa deserves credit, after a 0-2 start to their season, they did not fold. They had some tough losses to Northwestern and Purdue, but came out firing in the first quarter.

Their first touchdown of the game came within four minutes of the first quarter. Following a stop by the Hawkeye defense, Iowa put together another drive and converted a third-and-13 to go up 14-0. It was all going against the Spartans, and it continued like this for the rest of the day.

Mel Tucker preached the 24 hour rule to his players, even having a small practice the Sunday after the Michigan game to regain focus. Easier said than done though. Everyone knew year one was going to have some growing pains, and this game was a perfect example. The best thing for the Spartans to do is move on and focus on next week.

A week ago, everyone on special teams was doing their jobs, flying around, executing at a high level. This did not exactly happen Saturday.

Matt Coghlin missed his only field goal attempt of the day, and made his only extra point. The backbreaker was the punt return of 54 yards by Iowa’s Charlie Jones. Missed tackling seemed to haunt the Spartans on the play and seemingly destroyed morale, putting them down 28-0.

Punter Mitchell Crawford got into the game late and averaged 37.3 yards per punt, while starter Bryce Baringer averaged 42.7. A whopping 10 punts on the day for the Spartans was not a positive sign, meaning the offense was not converting their third down plays. Once again, I believe it is best for the Spartans to move on and focus on next week.