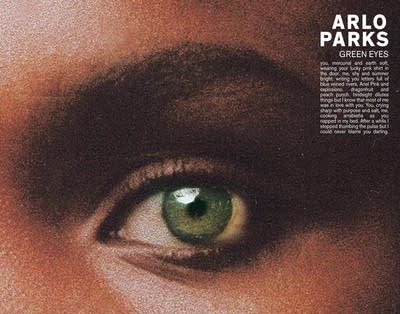 Singer-songwriter Arlo Parks released a single off of her debut LP, Collapsed in Sunbeams, “Green Eyes”, about wishing for acceptance in a young relationship.

In October, Parks is quoted in an NME article saying : “This is a song about self-discovery, self-acceptance, and adolescence.” The single also features Clairo on guitar and backing vocals.

The song begins with light and mellow instrumentals, and the first verse brings back nostalgia of summers past. The lyrics yearn for a past love that was torn apart by others’ judgement and social stigma. Parks laments:

“I wish your parents had been kinder to you/

They made you hate who you were out of habit/

Remember when they caught us makin’ out after school/

Your dad said he felt like he lost you”

The longing for the past is juxtaposed with the bad memories held there. The lyrics tap into the fears and longing of a young teenager struggling with their sexuality and first relationships.

While hatred and judgment caused the two to break up, the song turns the focus away from that hate to the love that kept them together for the short time they were. The love is what keeps the song positive and encouraging. It is what offers a voice of inspiration to a young listener who feels like they will never be accepted.

The chorus offers advice to those who feel downtrodden:

“Some of these folks wanna make you cry/

But you gotta trust what you feel insi-i-i-ide/

To add sunniness and comfort to your day, give “Green Eyes” by Arlo Parks a listen. Her album, Collapsed in Sunbeams, will be released in January 2021 on Transgressive Records.