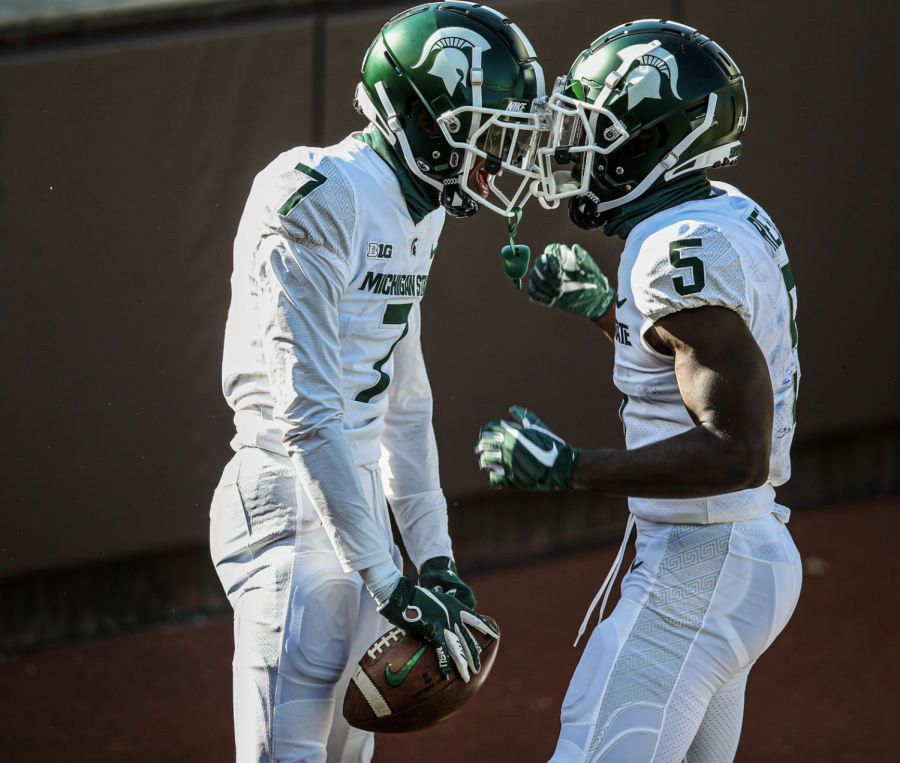 EAST LANSING- Michigan State true freshman wide receiver Ricky White was named the Big Ten Co-Freshman of the Week earlier today; the announcement comes on the heels of White’s record-setting performance on Saturday against Michigan that saw him catch eight passes for 196 yards and a touchdown. White was also named the National True Freshman of the Week by Pro Football Focus.

A native of Marietta, Georgia, White set a Michigan State freshman single-game record with 196 receiving yards. In his first career start, White made several big plays that helped the Spartans pull off the 27-24 upset in Ann Arbor, including receptions of 50, 40, 31, and 30 yards against the Wolverines. White, a three-star recruit, was the 416th-ranked player nationally in the class of 2020 by 247sports.com.

White hauled in a 30-yard pass from quarterback Rocky Lombardi in the end zone in the first quarter for his first career touchdown as a Spartan. White also had a clutch catch in the fourth quarter that set the Spartans up inside the 5-yard line, which eventually led to a touchdown that gave MSU a 10-point lead. White was the primary beneficiary of a newly implemented vertical passing attack that was effective against the Wolverines’ inexperienced secondary.

White’s 196 yards are the second-most by a Spartan wide receiver against Michigan (Plaxico Burress had 255 yards in 1999) and tied for seventh most overall in a game in MSU history. Through two games, White ranks fourth in the Big Ten with 22.3 yards per catch and fifth overall with 100.5 receiving yards per game (9 for 201).

Michigan State (1-1) returns to action on the road on Saturday, Nov. 7 to face Iowa (0-2) at 12 p.m. ET in Iowa City. The game will be televised on ESPN. The Spartans opened as a 7-point underdog to the Hawkeyes.