Bach: Michigan State out-worked Michigan, and that is telling about both programs 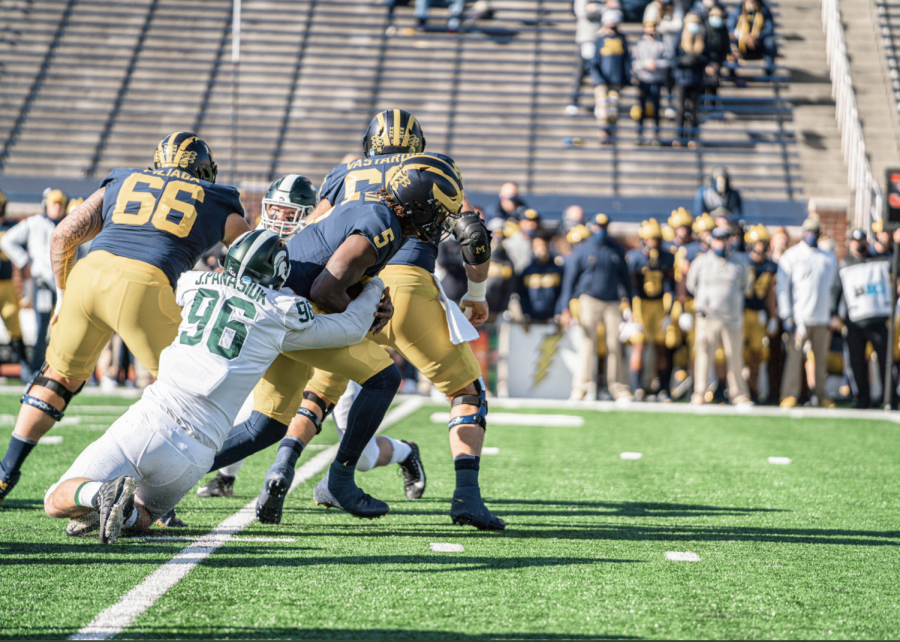 Just over a week ago, the Michigan State fan base was buzzing with excitement about the beginning of the new era of Spartan football. Mel Tucker and the new coaching staff had brought a new energy to the program that had been missing the past couple years. Then, seven turnovers and an excruciating home loss to Rutgers later, things felt a lot different.

There was no conceivable or realistic scenario going into yesterday’s game that said Michigan State was going to do what they did. But yesterday was no fluke. From the opening kickoff, the Spartans held their own on both lines of scrimmage, attacked Michigan’s biggest weakness in the vertical passing game, and saw the birth of a young star on the outside.

Did you have Ricky White going for 196 receiving yards in his first rivalry game on the road? Me neither.

What was supposed to be the affirmation of Michigan as the dominant program in this state turned into a Halloween nightmare for Jim Harbaugh. Just when it seemed like this might be the year Harbaugh finally wins the big one and silences his critics, Tucker and his staff completely out-coached the Wolverines in every way. There is no doubt that Michigan has the better roster. But yesterday, it didn’t matter. Michigan State exploited Michigan’s inexperience in the secondary and on the offensive line, and played almost completely flawless, mistake-free football.

Tucker said during his press conference this week that the biggest improvements come from week one to week two. My God, was he right. After the Spartans played hot potato with the ball last week, they showed poise and moxie this week. The Spartans were the more disciplined team, outside of Shakur Brown’s unnecessary celebration penalty that directly led to a Michigan touchdown. The Spartans threw the first haymaker of the game and kept on swinging, and Michigan was playing one step behind from the opening kick.

In the post-game press conferences, it was the same old story for Michigan. Joe Milton, who played timid in the second half and was the king of the check-down throws when Michigan needed him to use his big arm to make plays down the field, dissed Antjuan Simmons and the Spartan defense.

“He (Simmons) wasn’t really on my radar,” Milton said after the game. Read the room, Joe. You just got beat by your in-state rival in your stadium as 21+ point favorites. Talk is cheap. Michigan’s superiority complex and arrogant attitude are exactly why this win even happened in the first place, and why the win is so sweet for Michigan State. They just can’t help themselves. They read all their press clippings about how every year is finally their year, and they don’t know what it actually takes to win a game like this. In his second game, Mel Tucker has already surpassed sixth-year coach Jim Harbaugh in getting his teams ready for big games.

In an uncertain time that saw this Big Ten season revived at the last minute, this statement game made all the work that Michigan State has done to get to this point worth it. From being behind the eight-ball to begin with when Tucker was hired very late in the coaching cycle on Feb. 12, to losing spring ball to the pandemic, to having to conduct most of their off-season meetings over Zoom, to having a team-wide COVID-19 outbreak in July that led to two weeks off, the deck was stacked against Tucker and the Spartans.

But this week, for the first time since MSU began announcing student-athlete COVID-19 testing numbers, the Spartans had zero positive tests. No team is completely safe from potentially having an outbreak, but having zero positive tests the week of the Michigan game tells me that these players have bought into what Tucker and the staff are selling. They’re clearly taking all the steps needed to stop the spread of the virus, and I truly believe that Saturday’s result would not have happened if the Spartans were not at full strength. The Spartans out-worked the Wolverines in every way, and that includes being disciplined enough outside of football activities to not risk exposure for themselves and their teammates. In today’s pandemic world, that is a feat worthy of recognition.

So what now? Michigan State has completely changed the trajectory of their season. If they turn in another performance Saturday at Iowa similar to what we saw Saturday, then it’ll be even more impressive. It’s one thing to get up for your biggest rival, but what do you do next? That was one thing Mark Dantonio’s teams were always so good at, not having a Michigan hangover. Building off this program-changing win is almost as important as the win itself.

The 2020 installment of the Paul Bunyan Trophy game will be remembered forever by both sides. And it may have just given Mel Tucker and the Spartans the spark they need to get back to where they want to be.

Eric Bach is the Sports Broadcast Director and football broadcaster and columnist for Impact 89FM. Follow him on Twitter, @ebach21.